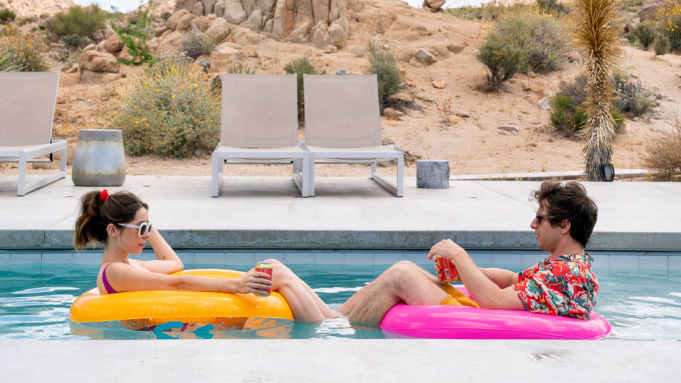 Review: 'Palm Springs' Is 'Groundhog Day' Meets 'You're the Worst'

Harold Ramis and Bill Murray defined the time-loop comedy in 1993’s Groundhog Day. At its center, a misanthropic anti-hero gets trapped in a single day he cannot escape. Hijinks ensue. Love blossoms. Suicide is a repeated—but useless—escape attempt. Regardless, each day, the same irksome alarm wakes him right back at the start. The irony is that in this time prison his actions have no consequences, yet it’s only by learning how those actions impact others that he can escape. We’ve seen this pattern repeated in movies like Edge of Tomorrow and Happy Death Day. Now, the Lonely Island gives this subgenre a spin with the pitch-perfect and inventive Palm Springs.

Written by Andy Siara and directed by Max Barbakow, Palm Springs is set in a cozy California resort rented out for a young couple’s wedding. But some of the revelers aren’t into the celebration. Sarah (Cristin Milioti) is the bride’s big sister, reluctant maid of honor, and black sheep of her family because—by her own admission—she drinks too much and f*cks to much. Watching her beaming baby sister (Riverdale’s Camila Mendes) get wed makes her twitch, but then she spies another oddball at the event.

Amid gowns and tuxedos, a thirty-something dude stands out in bright yellow swim trunks, a Hawaiian shirt, and smirking devil-may-care attitude. This swaggering manchild speaks cryptically about love and life, and dances around the drunken guests as if he has a peculiar premonition of what each’s next move will be. He’s Nyles (Andy Samberg), Sarah’s could-be hook-up for another regrettable one-night stand. However, why this night becomes regrettable has nothing to do with their frenzied make-out session and more to do with the man-hunting archer who interrupts and the inexplicable events that follow. Before she knows it boom: Sarah is back in bed at the start of this wedding day.

Palm Springs assumes you’ve seen Groundhog Day, so Siara’s script hits all the essential beats but feels no need to linger. You’ve been here before, right? The first act breezes by, pouncing to Sarah’s shocked understanding of her bizarre situation and that it’s all Nyles’s fault. After a splashy confrontation, she presses him for details to try to figure a way out. But before long, the comedy leans into the joys to be found in time captivity. A macabre yet mirthful montage has these human trainwrecks partying hard with trashy tattoos, on dive-bar dance floors, and in a stolen biplane. But it’s not all fun and reckless silliness. There’s a man out to get Nyles, and maybe more dangerous: Sarah’s starting to develop feelings for this time-looped Lost Boy.

Where other time-travel movies tend to focus on one f*cked up protagonist, Palm Springs gives us a pair, sharing the narrative between Sarah and Nyles. This makes for a richer journey because neither is a one-note dream girl/guy who’s love is essentially the movie’s McGuffin. Instead, they’re more like the jerk lovers of You’re The Worst, deeply flawed people who crave sex but fear intimacy, yearn for love but run from commitment. Yet no matter how hard they try, these doofs can’t deny their attraction.

Milioti and Samberg have a crackling chemistry that makes this rocky romance click from their funky meet-cute. As Sarah, she speaks with a low-key scoff, while her eyes flash with a guarded curiosity. Samberg abandons the guileless goofiness that’s become his signature, turning in a more caustic turn. The boyish grin still dazzles, but from it comes nihilistic observations coupled with a biting sense of humor. When they banter, they become Gen X’s snarky version of Tracy and Hepburn. When they collide, it’s as fun and exciting as watching fireworks.

For the first half, Palm Springs offers rollicking fun with a zinging wit and gleeful irreverence, chucking its anti-heroes into awkwardness and literal explosions. However, the second half is where it breaks away from the Groundhog Day model, digging more into the science side of this sci-fi premise while plunging deeper into pathos than its forefather dared. Barbakow guides his cast into scenes of scratchy tenderness without losing the movie’s comedic edge or falling into sickly sentimentality. A bit with a big trash bin shows just how sharply deranged this comedy is.

In the end, Palm Springs is a stunner, offering not only the time loop tropes that audiences have come to expect but also some smart surprises along with a heartwarming journey about finding love and getting your sh*t together. It’s an absolute blast. You’ll want to watch it over and over and over.

Palm Springs is now on Hulu.

← Review: 'We Are Little Zombies' Delivers Riotous, Candy-Colored Ennui | The Wayfair Child Trafficking Conspiracy Is Just A Runaway Theory Based On Cabinet Pricing →