Of all the topics for Meghan McCain to barrel into on a Monday morning, I honestly wouldn’t have picked Secretary of State Mike Pompeo berating NPR journalist Mary Louise Kelly as the hill Meghan would choose to skunk-spray her View co-hosts on. Christ, even Fox News was like, “Yeah, I don’t know about this one.”

To bring everyone up to speed, Kelly revealed that Pompeo walked out of an interview after being asked to provide examples of how he protected Marie Yovanovitch from the White House. She was then directed to a side room where Pompeo proceeded to allegedly scream and curse at her before questioning her intelligence by demanding that she point out Ukraine on a blank map. Naturally, Pompeo was not pleased that this information got out and released a statement attacking Kelly’s credibility and, for some reason, claiming she pointed to Bangladesh on the map because this administration is stacked top to bottom with filthy assholes.

The statement released this morning by @SecPompeo attacking @NPRKelly is a shameful assault on #PressFreedom. Americans deserve a Secretary of State, that is diplomatic, can answer foreign policy questions honestly, upholds our values and respects the press. This one doesn’t. pic.twitter.com/kRhr8IVNZT

To the surprise of quite a lot of people, NPR took off its earrings and showed up with receipts. Turns out those tote bags come in handy when you fill one with bricks and swing it at a motherf*cker. Not only did NPR CEO Michael Martin immediately go to bat for Kelly, but the Washington Post obtained emails that show that Kelly never made any agreement to not ask about Ukraine, and in fact, specifically made it a point to say that every topic was on the table.

With things going south for Kelly, Rape Daddy stepped in to make sure his glass-eyed cultists know exactly who to target after they strap on their suicide vests.

And that brings us to fierce, independent woman Meghan McCain, who hates Donald Trump more than anybody, which is why she’s going to jump directly on this grenade for him and hope to God screaming sheer nonsense will absorb the blast. Case in point, she literally compared Pompeo gaslighting a journalist with the full weight of the United States government to Adam Driver walking out of a “Fresh Air” interview. Yup. And you knew things were going to get real dumb because even Joy Behar made this face, and she hears fresh crazy Monday through Friday.

Joy should not be this stunned, and yet, here we are. 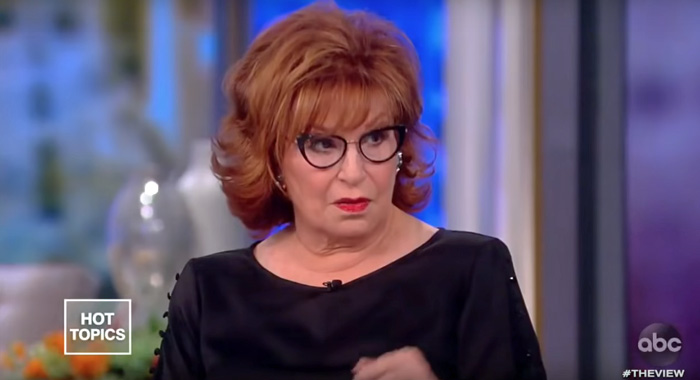 “This is now the second notable person that’s walking out of NPR, so I don’t know what’s going on over at NPR,” McCain continued. “I will say if you go into an interview and you’re someone like Mike Pompeo and you say, ‘I want to talk about this, I don’t want to talk about this,’ and you agree ahead of time and that journalist breaks the agreement, I can understand how you would get frustrated. I didn’t think he sounded that angry either.”

After Behar said Pompeo did get angry after the interview, McCain equivocated that while that is “ridiculous as well,” there is a “breakdown between the trust between the media and the White House right now, I think is because of this, because you have journalists reporting off-the-record information all the time.”

Co-host Whoopi Goldberg, however, interjected to note that point out that Kelly has all of the communication between her and Pompeo’s team.

Actually, it’s not “he said, she said” when there’s a paper trail, but as we’re learning in this buttwad timeline, facts mean jackshit. Especially when you’re dealing with someone who’s married to a walking propaganda machine for the president and knows damn well that all you have to do is accuse the media of being “biased.” It’s that frustratingly simple.

“I think she’s got the thing,” Goldberg said, “but you know, I have to say NPR is the last place I would be concerned. Now, there are times when people ask questions you don’t want them to and you have every right, but I think NPR as a network is kind of like PBS to me.”

“I don’t think this is showing the spread of people being disrespectful,” Goldberg added, “but I do think he’s not telling the truth because he went — he did the same thing to Martha Raddatz. He played dumb with her last year when she asked about the call with (Ukrainian president Volodymyr) Zelensky. He said the call never happened, he was on the call, so it’s kind of shocking in a funny way.”

Behar said the secretary of state should expect to answer tough questions from journalists, but McCain continued blaming Kelly for Pompeo’s outburst.

“I also think journalists are supposed to be unbiased in their questioning and if you have an opinion that he’s a piece of crap,” McCain said.

Here’s the part where I should point out that Meghan has no idea what an actual journalist does because, for starters, she’s an art history major who lands talking head gigs solely because of whose balls she flew out of, and second, she used to work at Fox News. So, of course, she thinks every publication operates exactly the same way because, otherwise, that would mean she’s a total moron who doesn’t know how objectivity works, which is impossible. *slams table* SHE’S JOHN MCCAIN’S DONG BLAST!

'Shameless' Season Finale: The Thing Keeping the Gallaghers Together Is What's Destroying Them