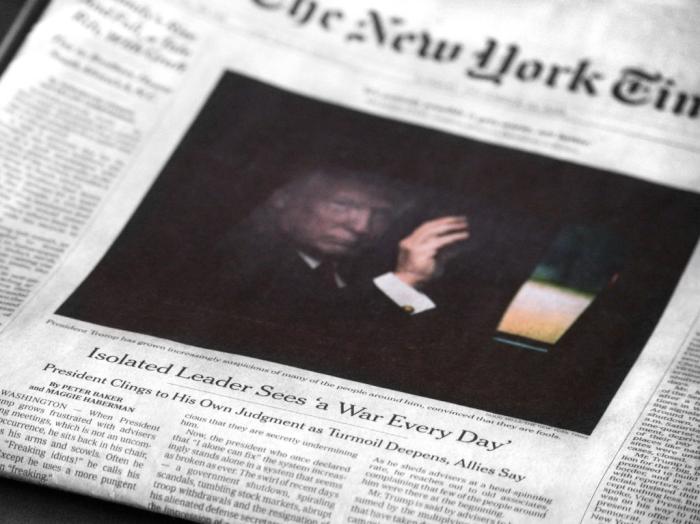 I’d like to begin this post with the usual caveat where it concerns matters involving Republicans so that no one needlessly gets their hopes up: It doesn’t matter. Any friction among Republicans is probably exaggerated by news sources to give the illusion that something might matter.

That is most certainly true of the manuscript of John Bolton’s book, which is due out in March, and which some inside the White House have seen (in part because Bolton had to run it through the executive for security approval).

According to the reporting of Maggie Haberman at the NYTimes, Bolton’s account concerning matters related to President Trump and Ukraine contradicts the arguments that the White House legal team has been making on behalf of Donald Trump over the last few days during his impeachment hearing. Most of what is in the manuscript is not new to us, but it is confirmation of what we already knew, and it comes from the former National Security Advisor, who had firsthand knowledge.

Pre-orders for the book have already gone on sale, but none of this is likely to matter in March when the book is due to arrive in bookstores (ha! “Bookstores!”) The only way it matters for the impeachment is if Bolton testifies, which is something that he has expressed a willingness to do. However, Republican Senators — for obvious reasons (*cough* cover-up *cough*) — do not want Bolton or any other witness to testify.

Democrats need four GOP Senators to side with them to call witnesses. They apparently have Mitt Romney and Susan Collins (but keep an eye on Collins, because she only disagrees with the GOP when it doesn’t matter), so they need two more. Lisa Murkowski and Lamar Alexander are their best bets, but with the Bolton manuscript out, there are concerns that Republicans will bow to public pressure and allow for witnesses (66 percent of Americans support calling witnesses according to a poll before the Bolton manuscript was leaked). Moreover, some Republican Senators apparently feel “blindsided,” according to Maggie Haberman at the NYTimes.

Per sources, some GOP senators privately pushing White House for information on who at administration had visibility into the manuscript over the last month. Senators feel blindsided.

Anyway, the media and Maggie Haberman are going to go through this charade and pretend as though this public pressure will matter because the media likes to believe that their work matters. It doesn’t, at least not where it concerns Trump, except over on Fox News, which provides a permanent firewall for Trump. The Republicans are not going to give in and call witnesses, because — as Axios reports — “there is a sense in the Senate that if one witness is allowed, the floodgates are open.” In other words, if Bolton is called, then Pompeo and Mulvaney are called, and while Trump will still survive, Pompeo and Mulvaney might not.

The real problem here, of course, is that the White House should have done a better job of vetting John Bolton before hiring him, says Fox News, where John Bolton was a contributor for years.

Brian Kilmeade's takeaway from the Bolton news is that the president "has to do a better job vetting his staff."

In other news, John Bolton is calling his book, The Room Where It Happened, so he can go ahead and f**k himself, too.


← Box Office Report: 'The Gentlemen' Stumbles Behind 'Bad Boys for Life'; 'The Turning' Flops | Is It Okay To Pee In The Shower? →