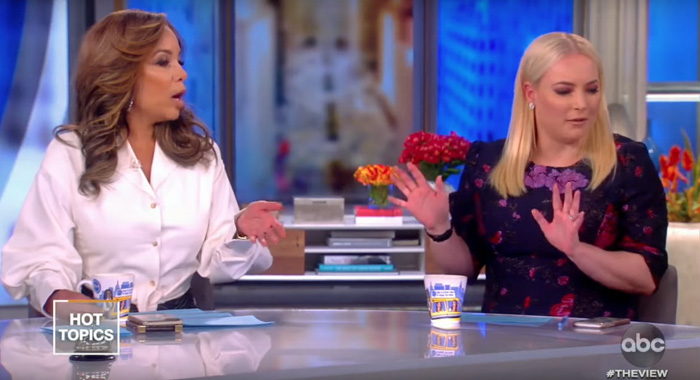 For what feels like a billion years, Meghan McCain has staked out the position that impeaching Donald Trump hurts the Democrats electorally, because not only does she wrongly believe it makes her look like some sort of political wunderkind (who got fired from MY FATHER’s losing campaign), but it also gives her plenty of space to completely ignore any and all evidence that Trump is guilty as hell. It’s a sh*tty little game that ABC loves so much that it knifed Abby Huntsman right in the back to keep it going.

However, with Adam Schiff’s opening argument expertly laying out Trump’s crimes in front of the Senate for all of America to see, it’s going to be hard for Meghan to jam her fingers in her ears and ignore the evidence. Or so you’d think. In predictable fashion, she barreled into the subject like the Hulk’s pigmentally challenged cousin Mulkghan. And, baby, Mulkghan came to smash your brain into tiny dumb pieces using her patented three-step process:

1. Open with pure f*cking nonsense.
2. Cry white lady tears the second someone says, “Hey, I think this is nonsense.”
3. Pout when Whoopi has to reel you in from swatting planes away on top of the building.

You can practically set your watch to it. I’ll even show you.

After huffing and puffing that she feels like she lives on a “different planet” because Schiff’s argument was clearly a “performative” attempt to be the new Dianne Feinstein? — (WARNING: Jell-O affects the mind.) — Meghan took particular exception to the fact that the impeachment process was being tied to the 2020 election. The impeachment process that’s entirely about Donald Trump attempting to illegally coerce a foreign entity into affecting said election. Yeah, Meghan doesn’t like that. Via Raw Story:

Schiff told senators that Trump’s misconduct cannot be decided at the ballot box because the Ukraine scheme was ultimately intended to corrupt the 2020 election, and McCain compared those comments to Trump’s baseless campaign claims about the fairness of the 2016 election.

“I always hated it when President Trump said (he) won’t concede because we don’t know if it will be a fair election,” McCain said. “You have Adam Schiff using this process, which I don’t think should have anything to do with this current election, saying that if the president’s misconduct can’t be decided we can’t be assured that the vote will be fairly won.”

“Why are you even bringing this election into an investigation where you’re talking about a phone call that happened?” she added. “The election right now has nothing to do with it. I didn’t like it when Trump did it or when he does it now, the idea that there are fake elections happening or it has something to do with this process.”

Obviously, this doesn’t make a lick of sense because, again, Trump is on trial for literally attempting to influence the election. Not to mention, we still haven’t fully grappled with whatever the hell Russia did in 2016. So, naturally, when Meghan’s co-hosts, who all have functioning brains, slapped down her bullshit without breaking a sweat, it was time for step two.

After Joy Behar pointed out the very clear connection between the impeachment and the election, Meghan hunkered down and declared herself “the only conservative in New York City,” which is funny because she used to work in an entire building full of them. It’s called Fox News. Via The Daily Beast:

McCain shot back, prompting Behar to interrupt and point out that she isn’t actually the only conservative in New York.

“Where? Find me! Say hi to me,” McCain exclaimed before muttering under her breath: “I don’t care.”

Co-host Sunny Hostin would eventually interject, noting that she believed the reason Schiff referred to the honesty of the next election is “because this president is on trial for trying to interfere with an election,” causing McCain to merely repeat what Schiff had said.

With the rest of the panel pushing back that Russia already interfered in 2016 and the charge is that Trump was attempting to get Ukraine to meddle in the upcoming election, McCain snapped back: “You can’t take the anger of this out on me that I’m not swayed by Adam Schiff.”

Pouting After Getting Reeled In By Whoopi

I’m going to go ahead and apologize right now if you were expecting another “GIRL, please stop talking” moment, but Meghan going straight for the fainting couch at the end is some delicious petty tea.

Whoopi Goldberg, who typically plays the role of referee, jumped in to assure McCain that no one was angry at her and they were just trying to have a conversation before throwing it to commercial break.’

“I guess, I just felt—I don’t have it in me today,” McCain uttered at the end of the segment.

And that’s what ABC pays Meghan one million dollars a year for in addition to making its political daytime talk show a goddamn laughing stock. “Eh, I’m not feeling it today.” Literally, all Meghan has to do is speak for one to two minutes, maybe three to four times at most, yet she acts like she’s goddamn Mel Gibson at the end of Braveheart if everyone on the panel doesn’t swallow her bullshit and go, “Yum yum, you’re right, Meghan. Adam Schiff is a little prima donna, which definitely isn’t you projecting your own massive insecurities all over the place. No, ma’am!”

← An Open Letter to Ryan Gosling: Where Are You? Come Back to Us! | Why You Must Watch 'Everything's Gonna Be Okay' →