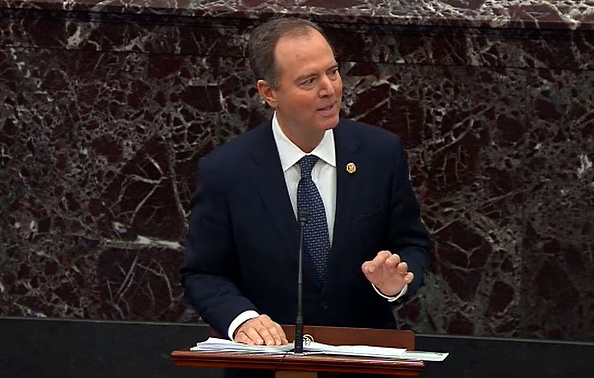 The first day of arguments in the impeachment trial of Donald Trump is in the books. I don’t know how much traction the impeachment proceedings are getting out in the “real world,” where Fox News is cutting away from the impeachment proceedings to do a segment on Hunter Biden’s paternity case, but if you’re not watching it — either because you already know the entire case, or because you don’t think any of this matters — you should know that Adam Schiff, a ten-term Congressman from California who has been assailed by Trump and his supporters more than any other Democrat aside from Hillary Clinton, is absolutely crushing it. The man is prosecuting the hell out of this case, and if the impeachment were anything resembling “fair,” Trump would be buried under the White House by Saturday.

Ultimately, Schiff’s arguments almost certainly won’t change any votes in the Senate, and it is unlikely to change public opinion in a country as divided and hardened as it is, but Schiff is behaving like a Congressman who knows that his arguments will be studied by scholars, who knows that they will one day be carefully recorded in history book and that some Spielbergian director will make a movie about Donald Trump’s 2020 impeachment, and Schiff may figure as its hero, a man who lost to the Republicans but wrestled a moral victory away from defeat.

He is calm. He is collected. He delivers his arguments with passion, but he remains even-tempered, even as he makes a clear case for the history books.

Time and time again, President Trump has shown he will continue to abuse his power, unless we hold him accountable.

The only appropriate remedy for a President of the United States so unwilling to be constrained by the rule of law?

Impeachment, and removal from office. pic.twitter.com/JOlxRLllUB

There’s a reason why Donald Trump set a record for tweets in a single day yesterday (142) — many of which were directed personally at Schiff — and it’s because Schiff has gotten under his skin. Hell, Schiff has even impressed Lindsey Graham.

I don’t know how many people are watching the trial, but of those who are, Schiff is impressing them, too. Not all heroes wear capes, y’all (but Adam Schiff would look great in one).

The coolest, bravest and most important person in the world right now is the same person — the badass Lead Impeachment Manager. #SchiffShow #TrumpIsGuilty https://t.co/A4essGPkpw

Based on the last 20 minutes or so of Schiff's opening arguments it would appear that the President is not only guilty but guilty to an almost comical degree.

Schiff wraps up by hitting the Senate with the 100-pound Shame Hammer.

Schiff's skill is apparent when you watch everybody else — the gap between his ability to synthesize and communicate, and everybody else's, is cavernous.

I’ve heard a lot of legal arguments in my day, including the top SCOTUS litigators in the country, and I have to say that Schiff is the best lawyer I have ever heard argue a case, bar none. I’m not just saying that. This is truly incredible work.

The GOP Senators aren’t mad that Schiff is repeating himself because they’re tired of hearing it:

They’re mad because they know thousands more people are watching this than watched the individual hearings, and that scares the hell out of them.

The Democrats are going to lose this thing, but with Adam Schiff making our case, we’ll go out with our heads held high.

← Did Kent State Gun Girl Poop Herself at a Party? | Michael Che Is Still Kind of a Dick →