Michael Che Is Still Kind of a Dick

It is insane to me that Michael Che has been the co-host of SNL’s “Weekend Update” for nearly six years now, along with Colin Jost, who has been doing it for a full six years. That is dangerously close to longest-serving “Update” anchors in 45 years of SNL (Dennis Miller held the position for six years, while Seth Meyers logged seven years behind the desk). Funny, because four years ago, I wrote that Che and Jost were the exact wrong anchors for this time, but that’s not exactly true anymore, is it? I mean, in 2016, with Donald Trump taking office, the Women’s March, and the MeToo movement, to have two men come out and deliver fratty jokes at each other’s expense felt a little tone-deaf at the time.

But now, in 2020? When nearly every “canceled” dude is still out there doing better than ever, after four years of fangless commentary and both-siderism from the mainstream media, it feels more like Che and Jost were just ahead of their time. Does anyone symbolize this era of, “Jesus Christ, just let me know which Democrat to vote for in November and leave me alone until then” better than Michael Che and Colin Jost? I mean, he’s got the goddamn Federalist — the publication owned by Meghan McCain’s husband — defending him over trans jokes. You can’t get any more “of this era” than that, unless of course the head writer of a lucrative property owned by Universal/NBC got engaged to one of Disney/Marvel’s most popular assets. Now that’s 2020! Colin Jost and Scarlett Johansson are conglomerate royalty!

I bring up Michael Che today because of a piece by Jack Allison over on The Outline. Long story short: Michael Che has been using his Instagram stories to berate Allison — a podcaster and former writer for Jimmy Kimmel’s show — for over six months. Apparently, Che took notice of Allison when Allison pointed out that those who audition for SNL have to sign a contract that basically gives the show creative rights to their entire social-media history.

“lol the shit people worry about.. i think you’ll be fine, man,” Che wrote on Instagram stories at the beginning of a months-long obsession Che developed with Allison.

But to be fair to Michael Che, he’s not singularly obsessed with Jack Allison. He’s basically obsessed with anyone who criticizes him. Remember Steven Hyden over on Uproxx? He wrote critically of Colin Jost, and Michael Che defended him, and then I wrote critically of Michael Che defending Jost, and Colin Jost made fun of me in a tweet that stayed at the top of his infrequently updated Twitter feed for months before he deleted it (“Another Megan named Dustin” is hands down the best comment I have ever received).

A marginally funny, but not particularly vicious dig that plays both sides. Very on brand, Colin Jost. pic.twitter.com/5Fj4xnfCUo

Che goes after everyone. Big publications, small publications. Jezebel. Page Six. Us magazine. It doesn’t matter. He’ll even get into it in the comments section, as he did here years ago after the catcalling incident (it’s not street harassment, it’s a “compliment!”)

That comment, which he has since deleted, was on this post, which Che referenced again yesterday, six years after its publication. He hangs on to those grudges tightly. 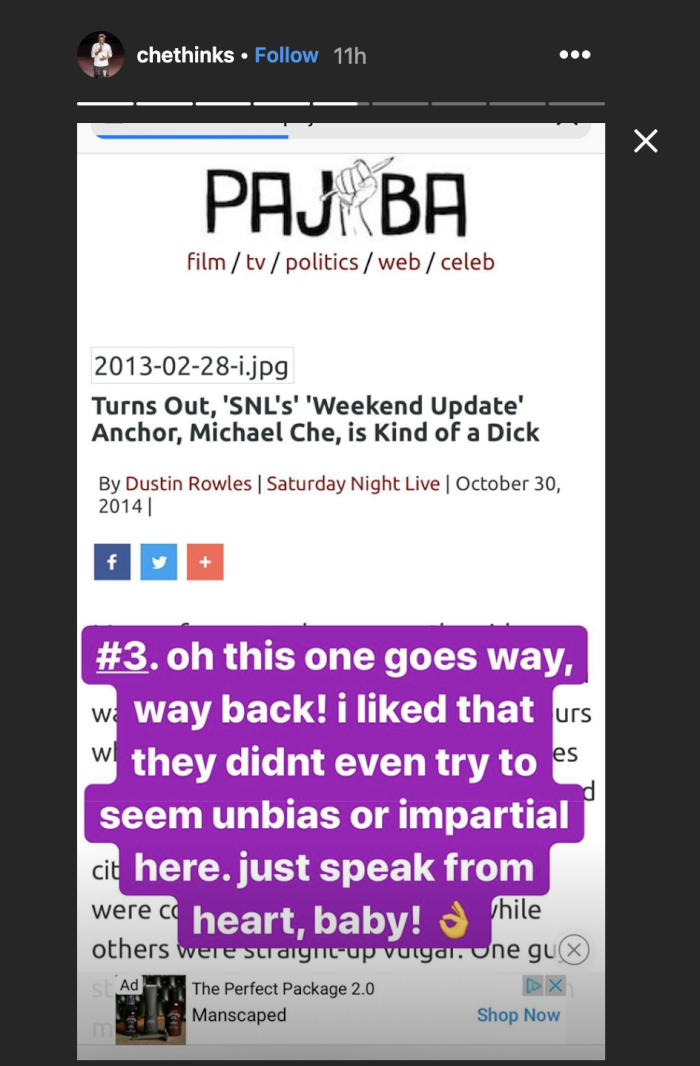 For the record, Mr. Che. We are not a news-gathering organization. We are an opinion site. We don’t have to be “impartial or unbias” [SIC]. Speaking from the heart is exactly what we do, and my heart says you’re still kind of a dick.

Mostly, though, Che’s just kind of insecure, which is interesting, because as an “Update” anchor, he’s relaxed into the position, and for better or worse, he’s an accurate reflection of the times now. I mean, he and Jost will always be remembered as the “Update” anchors on duty in the era in which SNL helped to humanize Donald Trump, put him in office, and then often cavalierly equated the misdeeds of his political opponents with the mental illness and authoritarianism of Trump. But hey! We all have legacies. Che’s is just … that thin-skinned guy who constantly went after his critics (how very Trumpian!) and deadnamed Caitlyn Jenner while a Nazi was in the Oval office. Also, the last Emmy or Oscar host before both ceremonies decided to ditch hosts altogether, but I’m sure that’s just a coincidence! I will say this, however: I genuinely do appreciate how loyal Jost and Che are to each other, and after six years, they are often very funny and have good chemistry together. Sometimes, they even put it to good use.

← Adam Schiff Is a Goddamn American Hero | After 11 Months, Michelle Carter Has Been Released from Prison. Good →