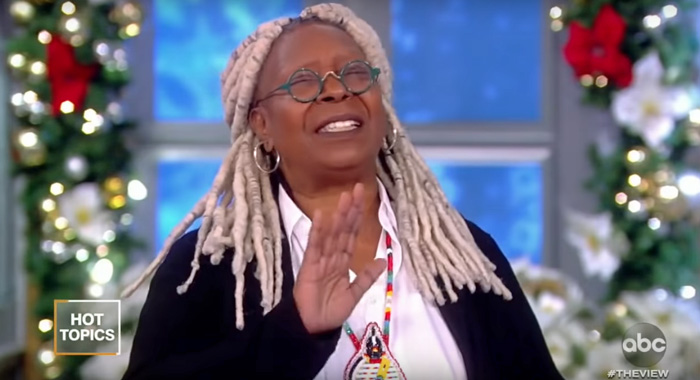 Before we begin, I’d like to thank each and every one of you who immediately piled into my mentions after witnessing a true holiday miracle that will live in our hearts forever. There is no greater sense of pride than knowing when people see a garbage pail of mayo get dropped at the curb on live television, they think of me as the exact petty bitch who’ll be here for it. And I am, with bells on.

So let’s get to the festivities, and in an effort to stay on-brand, I’m gonna keep the foreplay minimal to non-existent. We’ve seen Whoopi Goldberg shut down Meghan McCain before. It’s practically Whoopi’s job at this point, and in the process of corralling a human dump truck filled to the brim with Jell-O shots and Ben Shapiro talking points, sometimes things can get testy. But today? Today, Whoopi broke. I don’t know what your life is like, but if you can find a way to watch this clip, I’m gonna highly recommend doing so. Find a restroom stall, a janitor’s closet, a cupboard your kids can’t open, whatever works. I even queued it up right at the good stuff.

What was the panel discussing before they saw a bleached corpse in bad make-up get dropped right in front of their faces? It doesn’t matter. What matters is the exact moment when Whoopi Goldberg snapped, threw up her hands and said, “GIRL, please stop talking” because she couldn’t listen to one more second of Meghan farting her Federalist horseshit while Sunny Hostin was trying to make a point. (Side note: If you rewatch that clip 800 times as I have, pay careful attention to Sunny’s face after Meghan gets told about herself. Just… mwah. *chef kiss*) And because this whole column is basically porn right now, here’s Meghan’s exact reaction at ground zero, and I like to believe she’s turning toward John McCain’s ghost for help. “But, MY FATHER, she’s not treating me like you’re MY FATHER!” 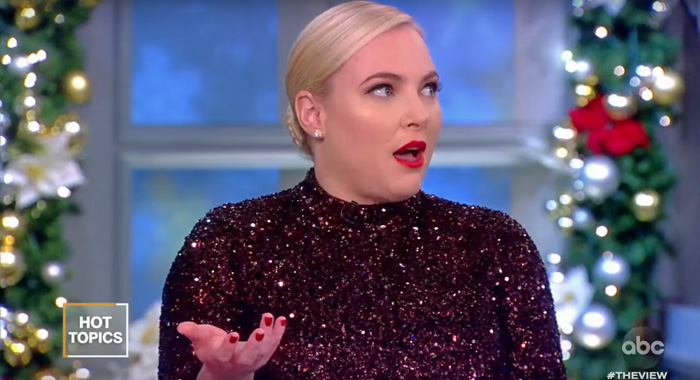 Naturally, Meghan responded like a sullen teenager who just got told to stop Snapchat-ing her gargoyle haunches at the table, and she pouted that she won’t talk for the rest of the show, as if that was a threat and not a joyous, rapturous gift whose beauty and splendor outshines every trinket and bauble this holiday season has to offer. At that point, Whoopi straight-up had it and ended the whole panel by throwing to commercial. If that sounds familiar, it’s the same power move she pulled on Donald Trump Jr.’s ass because if it’ll stake one nepotistic shit-gibbon in the heart, surely it’ll puncture another one even with its protective layer of Ranch dressing.

Unfortunately, getting snatched up by her roots wasn’t the final push Meghan needed to quit The View for Fox News, and as of this writing, she’s tweeting through it like a certain rapey sack of oranges that smells like Quarter Pounders.

Dems and Rs alike need to confront the ugly truth: both parties are failing to be impartial jurors. I won’t be quiet, even if the reality reflects poorly on the entire political establishment. I have a responsibility to speak for the 50% that feels media doesn’t represent them.

It probably doesn’t hurt that Meghan has reached full martyr status on Conservative Twitter now. Even Tiny the Mass Shooter-Inspiring Elf is getting in on the act.

Nothing says tolerance and diversity like Whoopi Goldberg telling Meghan McCain to shut up after McCain says literally *a* sentence about the political fallout from impeachment. So much sisterhood from Goldberg.

Let me handle this one: GIRL, please stop talking. — You’re right, I can’t pull that off. That was stupid. I know better.

← Which Democrat Can Defeat Trump? We Just Don't Know Anymore | 5 Shows After Dark: 'Christmas With the Houghs' on NBC, 'Jimmy Kimmel Live After Darth' on ABC →