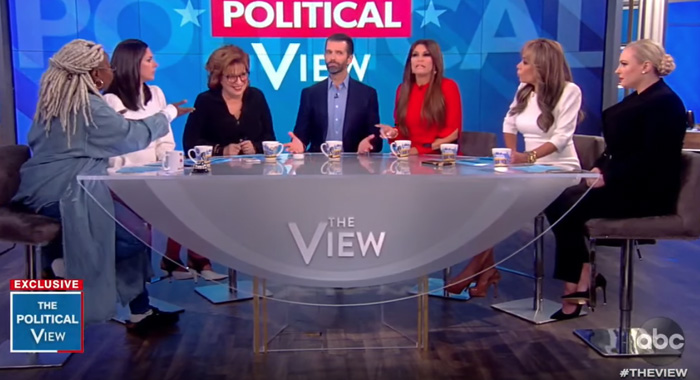 Like a pampered Piss Christ presiding over a Last Supper from Hell, Donald Trump Jr. stopped by The View today with Kimberly Guilfoyle in tow. The couple was on hand to promote Junior’s new book “Triggered,” which clearly stole its title from the 8,000 Netflix specials about comedians who are mad about pronouns. Just super original stuff. But before we begin, I really want to set the table with this anecdote from last month’s The Atlantic piece that actually tried to suggest that Junior is some sort of burgeoning “kingmaker” in the Republican Party. (He’s not.) The excerpt is from the beginning of his relationship with Guilfoyle and how his father reacted slash made everything super gross.

Some suspected that the president was simply fed up with the distraction the relationship posed. But according to one longtime Trump adviser, there may have been another reason for his displeasure. Over the years, Trump had frequently made suggestive comments about Guilfoyle’s attractiveness, the adviser told me, and more than once inquired about whom she was dating.

That’s right. The President of the United States was jealous that his son banged a Fox News anchor before he could. This is our world now. On that note, let’s get to the shit show!

Not even a few seconds after the couple was introduced, Abby Huntsman surprisingly came out firing and basically said, “F**k a book, let’s talk about you naming the whistleblower,” and from there everyone starting pouring gasoline on the nepotistic trash fire trying to be Daddy’s #1 Candy Boy. Via The Daily Beast:

Abby Huntsman kicked things off by comparing Trump Jr. to a “dictator” for tweeting out the alleged name of the whistleblower in the Ukraine scandal. “The whole point of releasing a name is to intimidate someone, to threaten someone, and to scare other people from coming out,” she said. “That’s something that dictators do. I have lived in China. I have seen that first-hand. That’s not what America does. We stand by our people. Why did you want to release the name?”

For the next several minutes, Trump Jr. defended his actions by arguing that the name had already been published on sites like the Drudge Report and expressed no regret for doing what could amount to a federal crime. He went on to whine that he wishes the “outrage” was equal when his family has been targeted by critics.

“He asked to be anonymous, your family did not!” Joy Behar shot back.

“I’m a private citizen putting this out there,” Trump Jr. protested to laughs of disbelief from the hosts.

As Whoopi tried to contain the yelling, which a couple of MAGA hats in the front row weren’t helping, Sunny Hostin put Guilfoyle on the spot by essentially asking her, “How goddamn stupid of a lawyer are you?” Via Raw Story:

“Kimberly, you’re a lawyer, we have known each other, you’re a former prosecutor,” co-host Sunny Hostin said. “Did you advise your boyfriend that it is a federal crime to out a whistleblower?”

Guilfoyle said she didn’t tell him that was a crime, but she agreed it was a bad idea.

“I did come out of the bathroom and say, ‘I left you alone for 10 minutes — what happened?’” Guilfoyle said.

Trump Jr. argued that was only a crime if the inspector general revealed the name, but Hostin pushed back.

Trump Jr. insisted that was not accurate, but Hostin wouldn’t give an inch.

“My law degree says it is,” she said.

Noticeably, Meghan McCain was quiet as a church mouse during this whole production. Not a peep out of her until it came time for her contractually negotiated time to spew words from her Gargoyle Made Out of Jell-O Shots Perch. In an absolute shocker of a move, Meghan read a seemingly pre-written statement about how Donald Trump is bad because he was a dick to Gold Star families — which is true — before the whole conversation devolved into a schmaltzy, meaningless call for “civility.” No exaggeration, that was the full extent of Meghan’s contribution to this debacle. Tough as nails, root-tootin’ Maverick Daughter Jr. quietly wilted back into silence never to be heard from again. (God, I wish.)

Like his father, Junior couldn’t even handle Meghan’s softball questioning without making himself the victim and f**king everything up. He proceeded to launch into a tirade about how his dad is controversial, BUT he’s the awesomest president that ever was, and hey, where was everyone when people were mean to his dad? A bullshit canard that Whoopi was not having and dropped this bomb.

“Part of being president is having a pair that can take whatever heat comes towards you.”

From there, the panel devolved even further to the point where Whoopi had to ring a goddamn bell to get everyone to shut up, which prompted Junior to make a quip that Whoopi was an example of “P.C. culture” because she was getting tired of his constant, lame-ass jokes. I’m talking he literally equated himself to Bill Burr and Dave Chappelle, which says a lot about that whole situation. More importantly, Junior’s King of Comedy routine was clearly the last straw for Whoopi who shut the whole show down 15 minutes early as Guilfoyle started stumping for Trump. Via Raw Story:

“I’ve known the president 13 years, I know Don Jr. I’m proud Latina, I know the measure of the man, I know his character — the entire family. I stand for them because I do believe their commitment. Women are doing better under President Trump, Hispanics, African-Americans — that’s not fake news, it’s real.”

That’s when Goldberg called the appearance to a halt.

“I will just say this because, it is the end of the show,” she said, pausing.

The other panelists seemed confused, because the show still had 15 minutes left.

“I don’t think it is, Whoop,” Huntsman said.

Goldberg made herself more clear.

“It’s the end of this show,” she said, gesturing toward her two guests — who realized they’d been sent on their way.

“Oh, okay,” Trump Jr. said, biting his lips as Guilfoyle made an exaggerated, but silent, laugh.

What’s incredible is Whoopi Goldberg spends every morning getting shrieked at by Meghan McCain, so her threshold for clowning is pretty high. Yet, somehow, these two jerkholes managed to drive Whoopi to the brink of booting their asses off of the show in just over 20 minutes. It’s almost impressive, in the dumbest possible way.