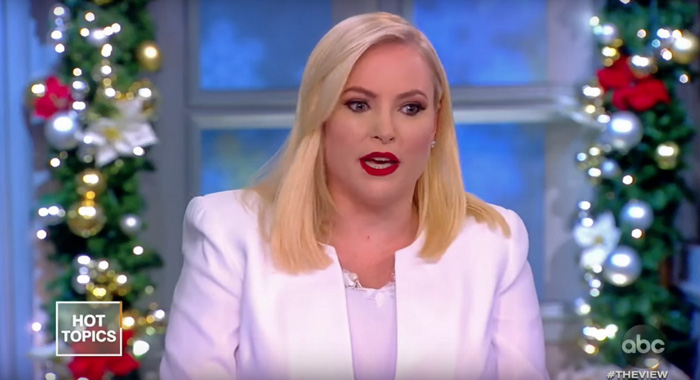 Folks, I don’t want to exaggerate here, but welcome to the goddamn Holy Grail of The View clips. I’m talking it’s so good that I’m barely going to set it up because it’s truly best if you just bathe in it like a bathtub full of Jell-O shots and ammo rounds.

After watching Matt Gaetz shaming Hunter Biden’s substance abuse problem on the House floor and having it spectacularly blow up in Gaetz’s dumb, DUI face thanks to Rep. Hank Johnson (D-Ga.), the panel discussion naturally honed in on nepotism, so you’ll never guess which two co-hosts sat there awkwardly silent. (I’ll give you a hint: Their names rhyme with Buntsman and Cocaine.)

As if that wasn’t a delicious enough stew, Joy Behar started suggesting that after the disaster in the UK, Joe Biden is presumably the top candidate for the Democrats, but she really wishes he would start tackling the Republican attacks on his family head-on. However, Behar went on a bit of a tangent that Biden could use his reputation as a grieving father to galvanize support, and that’s when Meghan McCain could no longer hold back the bubbling mayo-cauldron of white lady inside of her. Apparently, Meghan doesn’t think anyone should play the “grief card.” The same Meghan McCain who consistently uses her dead dad as a shield, battle cry, possibly even a bottle opener at the drop of a hat. Not to mention, every politician who stops by The View has to genuflect at MY FATHER’s legacy or her gargoyle shriek will rip the flesh from their bones, which Tom Steyer got to experience first-hand today.

More importantly, just think about this for a minute: Meghan McCain, the Meghan McCain, said no one should play the “grief card” during a discussion on nepotism. You cannot make this shit up even though I’m kind of convinced I made this all happen with my mind. Or Santa is real and got my letters. It’s a toss-up.

P.S. I love how Joy asks Meghan for a better phrase than the “grief card,” and Meghan responds by vomiting a word salad so jumbled and seemingly never-ending that it would turn Sarah Palin’s frozen Alaskan nips into red hot pokers. It takes skill to say that many words, yet have them mean absolutely nothing. You can’t teach that.