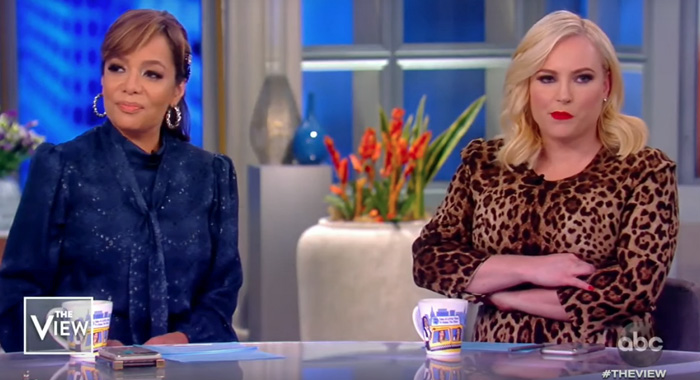 For what feels like an eternity, and not the cool kind where naked clones give me pocket watches — A Watchmen reference in a MY FATHER™ post? You bet your ass! — I’ve chronicled Meghan McCain’s inexplicable presence on The View, which somehow continues to reach new and ridiculous levels of pure white lady privilege. It should already be bad enough that she very rarely knows what the hell she’s talking about and often derails informative conversations with nonsensical hot takes that consistently blow up in her face, but she also has a penchant for throwing increasingly child-like tantrums. Like the time she stormed off set after getting burnt by Ana Navarro, or this morning’s delicious bit of schadenfreude that I’m going to make a meal out of, when Meghan literally crossed her arms and pouted after Joy Behar dunked on her so hard that it’s a miracle the words “BOOMSHAKALAKA” didn’t appear in fiery letters.

It all started with a panel discussion on Nancy Pelosi shutting down reporter James Rosen, who tried to pull some shit by suggesting the entire impeachment process is all because Pelosi “hates” Trump, which was an absolutely dumb-as-balls move considering Pelosi was notoriously hesitant to pull the trigger on impeachment. You can tell Meghan was primed for some shit when she immediately shot down Joy’s suggestion that Rosen was a “plant” by saying only the Democratic campaigns do that (riiiiight) and that Rosen is actually a “very well-known journalist” whom she worked with at Fox News. Setting aside that glaring oxymoron, Meghan is surprisingly right about one thing. Rosen is well-known, but for reasons she conveniently left out. Via NPR:

The network cited no reason for Rosen’s exit and did not announce it on the air. According to Rosen’s former colleagues, however, he had an established pattern of flirting aggressively with many peers and had made sexual advances toward three female Fox News journalists, including two reporters and a producer. And his departure followed increased scrutiny of his behavior at the network, according to colleagues.

Turns out you don’t get booted down to doing gotcha questions for Sinclair by being awesome at journalism, which is probably why Abby Huntsman, who also worked at Fox, let Meghan jump on that particular grenade while Abby called out Rosen’s blatant attempt at clickbait. From there, the panel continued to praise Pelosi for her “masterful” handling of the situation, and even Meghan agreed with that consensus when it reached her time to talk. Naturally, that lasted a nanosecond before she reminded everyone that her favorite recreational activity is horfing Jell-O shots while twirling machine guns. You see, Meghan got it in her head that it’d be an ultra sick burn if she pointed out that Pelosi’s congressional campaign is already selling “Don’t Mess With Nancy” shirts because apparently political merchandise is the devil now. And if all of this is setting off alarm bells because you’ve foolishly been reading every one of these columns, allow me:

YOUR HUSBAND SELLS “KAMALA IS A COP” T-SHIRTS, YOU MORONIC MEATBALL.

Fortunately, Joy wasn’t having any of this, and by the end of the discussion, Meghan was reduced to looking like a child who just got told to put the Lucky Charms back. Via Raw Story:

Host Joy Behar pointed out that political merchandise was nothing new.

That set McCain off.

“You know what?” she said, as the audience continued cheering. “I’m just trying to make a point. I have never worn a MAGA hat, and I think you know better than anybody that I would never wear a MAGA hat, but I just — politics doesn’t have to be a meme and clicktivism.”

By this point, Meghan has her arms crossed and is visibly pissed. Everyone in that room knows she just got burnt alive so badly that even she knows it, which is pretty remarkable for someone with the self-awareness of a Christmas ham. More importantly, for a brief moment, Joy makes this face, and just once in my life I want to be filled with this much petty joy and amusement at the total destruction of my enemy. 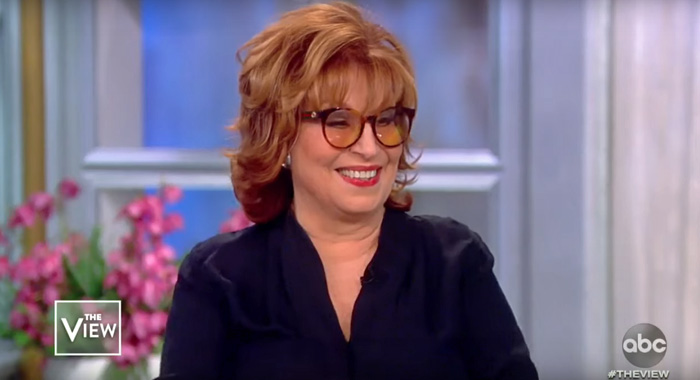 So the next time Meghan wants to call herself a “bad bitch” or lecture someone on Twitter that “I’ll be fine, honey” because she’s used to being the only conservative in the room or whatever, just remember the day she acted like an episode of My Super Sweet 16 when someone got the wrong Beamer. But then also try not to remember that ABC apparently pays her millions to do exactly that, and wow, this high ended real quick. I’ve been in car accidents with less whiplash. Jesus Christ.

Here’s the clip, which I went ahead and queued up for Meghan’s meltdown so you can dive right into that sweet, sweet muck. Happy Holidays!

← 'Paddington 2' Is The Kids Movie That Came To The Rescue Just When Grown-Ups Needed It | What's the Difference Between 'Merry Happy Whatever' and 'The Moodys Christmas'? →