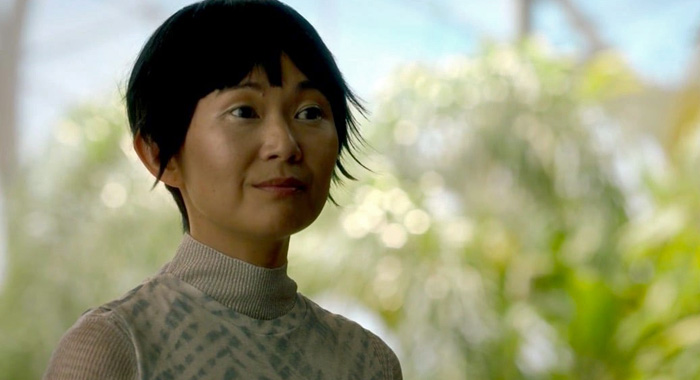 Who Is Lady Trieu's Father on 'Watchmen'? Or How I Learned to Accuse Superheroes of Not Wearing a Condom

While “An Almost Religious Awe,” the seventh episode of HBO’s Watchmen, dropped a massive blue bombshell, it also tossed an interesting tidbit about the mysterious Lady Trieu into the mix. Namely that she has a “father” who’s on his way to witness the launch of her ominous Millennium Clock alongside a clone of her mother. The show specifically went out of its way to tease the information, which suggests that Daddy Trieu is gonna be someone important. So just as the original comic dared to ask “Who watches the Watchmen?” the show ups the stakes by boldly asking “Who watches the Watchmen not pull out?” Sadly, the answer is me. And, OK, probably Petey. I’m not gonna pretend that guy doesn’t have charts and graphs of superhero dongs. Game recognize game. Anyway, let’s start wildly speculating. 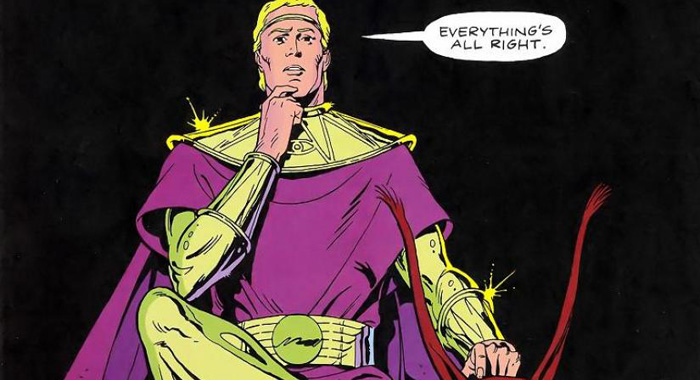 If the show is trying to heavily telegraph that Veidt is Lady Trieu’s father, it’s working. She keeps a statue of him in her lair, she refers to him as her “seed” of inspiration, and she’s insanely smart as shit just like him. There’s also the fact that Trieu absorbed Veidt’s entire company, which according to the Peteypedia, almost went bankrupt until he made a breakthrough in — wait for it — pet cloning. On top of that, you have Veidt’s deliberately obscured moon message that read “Save Me D-” and last time I checked, daughter starts with a “d.” (Then again, so does dildo, and a certain mammoth blue one has proven to be a critical lynchpin of the show. Food for thought.)

In a nutshell, there’s clearly a lot going on that directly connects Veidt and Trieu. Legacy is a vital ingredient in Watchmen, and DC Comics in general, so it would absolutely track if Trieu is Ozymandias’ daughter whether in the Biblical sense or she’s one of the few clones that he actually got right. Granted, it would be a very obvious reveal, but people nailed the Doctor Manhattan theory on day one, and the show still continued to slap every damn week. 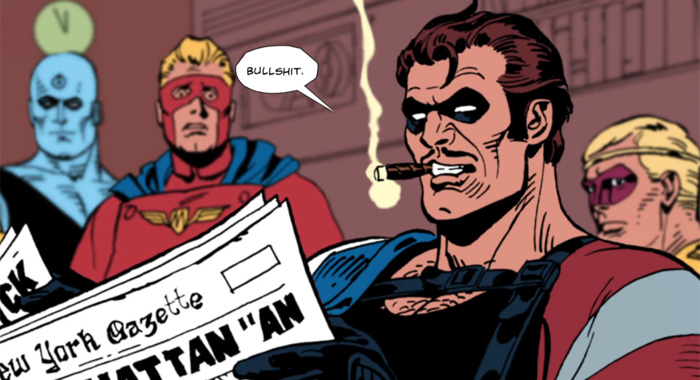 After watching the first two episodes of the show, I went back and reread the Watchmen book, which I cannot recommend enough. The show leans very hard into the source material, way harder than I would’ve expected for a mainstream HBO series, so you’ll definitely be rewarded by giving it a read. That said, for the love of God, please don’t try and use the Zack Snyder movie as a substitute. I will come to your house and throw a squid at your TV.

To the point, when Lady Trieu showed up and revealed her Vietnamese heritage, I immediately remembered that The Comedian spent his time in Nam knocking up local villagers. For weeks, I thought I was all kinds of clever for remembering that little factoid — until I researched this column and learned that it’s been in the goddamn Peteypedia the whole time. I’m talking there’s a newspaper clipping where Lady Trieu specifically denies being The Comedian’s daughter. However, the Peteypedia also has an entry that claims Veidt has no children, so grains of salt might not be a bad idea here. Of course, there’s the small matter of The Comedian being dead. But if Lady Trieu already cloned her deceased mother, it probably ain’t hard to whip up a batch of Dad, which would be extremely nuts because The Comedian is also Laurie Blake’s father and, uh, her mom’s rapist. I’m not a fancy TV writer, but that sounds like some high-ass drama to me. 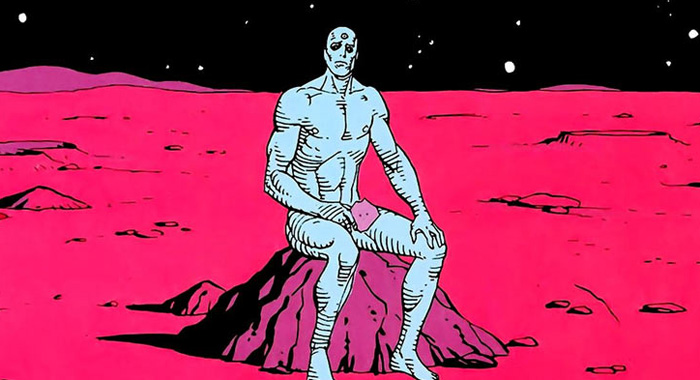 While it’d be a safe bet to say that the chance of Lady Trieu’s father being Veidt or The Comedian is a 50/50 split, there is a tiebreaker floating around that I’ll be honest, I don’t see happening: Doctor Manhattan. After the big Cal reveal, it would be relying way too much on the character even though Damon Lindeloff has now said in interviews that he couldn’t imagine doing a Watchmen show that didn’t prominently involve Doctor Manhattan. There’s also an elephant in the room that I’ve been thinking about for weeks now, and I’m dead serious about this question:

Maybe I read comic books too carefully, or in the weirdest, most incorrect way possible, but any sex scenes involving Manhattan — and Cal for that matter — basically show him being there to satisfy his partner with zero to little interest in his own gratification, which is never shown or even addressed. There’s a high probability that Doctor Manhattan just does not nut. And if that explosive theory doesn’t get me invited into the season two writers’ room then I’ve embarrassingly shot my wad here.

That said, there are ways for Manhattan to be Lady Trieu’s “father” besides the impossible scenario where he somehow knocked up a woman in Nam with the semen that I’ve already established he doesn’t shoot. At the very end of the book, Doctor Manhattan tells Veidt that he’s regained his interest in human life, and that perhaps he’ll “create” some. Could that mean that he now has the power to will human life into existence like, say, an extremely intelligent Vietnamese girl? Maybe!

There’s also another theory I’m kicking around that surprisingly doesn’t involve blue jizz, or a lack thereof. During the scene where we learn that The Comedian was knocking up villagers with every intention of leaving a gaggle of fetuses behind, one of his victims attacks him in a bar while Doctor Manhattan just stands there watching the events unfold. He doesn’t even lift a finger when The Comedian pulls a gun and shoots the pregnant woman dead, which doesn’t go unnoticed. The Comedian immediately gets in Manhattan’s face and asks him why he just stood there. He could’ve disassembled the gun or made it shoot flowers, but instead, he just watched, and this chills The Comedian to the bone. A man who just murdered a pregnant woman is startled by Doctor Manhattan’s lack of humanity.

Now for the wacky sci-fi part. It was shown in the book that linear time doesn’t exist for Doctor Manhattan, and the show has already dropped hints that he can travel through time. What if he went back to that fateful day in Nam and created life by reviving the dead woman, and more specifically, her unborn child who grew up to become obsessed with Doctor Manhattan? (In the Peteypedia, Lady Trieu’s Millennium Clock is believed to be an attempt to get Manhattan’s attention and also maybe a time machine. Yup.) Granted, this would technically still make The Comedian the father of Lady Trieu, but one could easily say Manhattan earned that title. 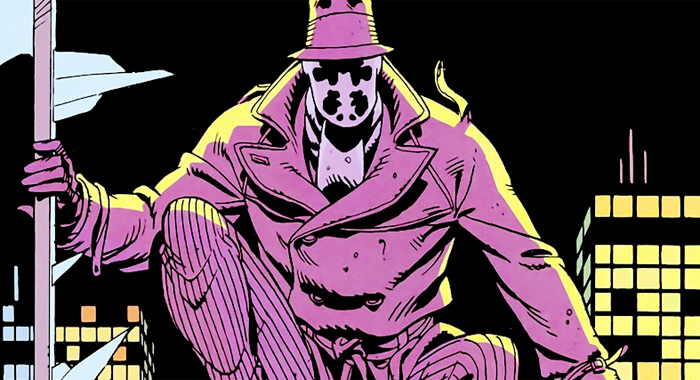 Some Random Shit out of Left Field

Just so we’re clear, it might look like I’m about to do a hot take by suggesting that Rorschach is Lady Trieu’s father, but really, I just wanted an excuse to mention that when Doctor Manhattan “killed” him at the end of the book, the effect looked exactly like Manhattan’s teleportation power. So while it’s not out of the realm of possibility that Rorschach could be Trieu’s father, his very prominent sexual hangups regarding his mom probably put a significant pin in that. That said, he’s still very much in play for other events in the show because literally anything can happen at this point. We’re already talking about clones, time travel, and a blue-donged deity who can practically alter reality at will. Everything’s on the table. Lady Trieu’s dad could be anyone from Jesus Christ himself to the comic book pirate with a raft made of dead bodies, and I wouldn’t bat an eye, because this show f*cks so hard even if one of the characters doesn’t jizz.