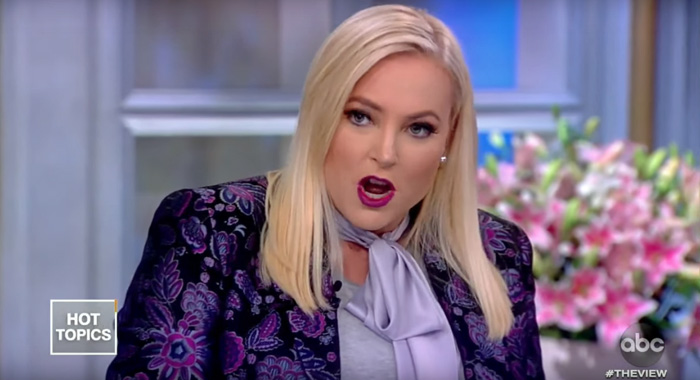 It’s Friday, so I’m not going to toy you folks along and ramble on for a few paragraphs before getting to the good stuff. We’ll do the foreplay after. On that note, here’s Meghan McCain storming off the set of The View because Ana Navarro told her to stop screaming during a tense, yet mind-numbingly stupid argument over the latest development in the Donald Trump whistleblower story that sure as shit looks like an impeachable crime. While that news absolutely should be our focus, let’s not pretend watching Meghan huff backstage isn’t a goddamn delicious pleasure. Even the audience can’t believe they finally saw it happened. It’s almost like there’s a feeling of hope in the air.

(Apologies for the wonky clip, but for some reason, Meghan storming off didn’t make it into the official embeds. Apparently, ABC hates YouTube views now.)

Meghan McCain stormed off after @ananavarro put her privileged, insufferable ass in her place. The panelists need to do THIS more often! Better yet, can Ana replace 'Me-Again' McCain on the panel?!? 🙏🏽#TheView pic.twitter.com/Mn6dxxYbMf

So how did we get to this point? Remember earlier in the month when Pamela Anderson and Meghan argued over Julian Assange and Pam scored exactly one good point that made Meghan literally snap at a dude in the audience? Well, Meghan felt today was the day to grind that particular axe.

If the words I’m about to post here make absolutely zero sense, don’t feel bad, because no one else on The View had a clue what the hell Meghan was trying to say. By the end, even Meghan admitted she was making a “clumsy” point, which probably should’ve occurred way sooner, but clearly she had a broader goal in mine and it’s the same one it always is: “MEEEEEEEEEEEEEEEEEEEEEEEEEEEEE!”

“This is what I know. We had Pamela Anderson on a week or two weeks ago, and I took her to task about Julian Assange. [Mike note: No, you didn’t.] There are a lot of liberals okay with him, those same people are screaming bloody murder right now about this whistleblower.”

“I think all interference from a foreign country in our election, all of it is bad and should be condemned, and you can’t play party politics with this, and there’s a lot of people on the left who are doing that with Julian Assange,” McCain added.

The other panelists seemed confused by the topic change, and host Joy Behar asked her to clarify.

From there, Meghan continued to dig herself deeper, and I really need to stop for a minute and recognize Sunny Hostin’s face game, which was on point the entire time. This is how you shade a white girl who consistently uses her panel time to repeat dumb shit that she saw on Twitter. 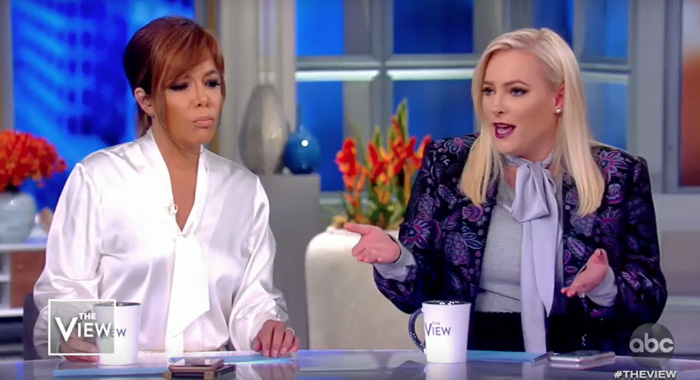 In fairness, here’s the part where I begrudgingly have to admit that I kind of started to get where Meghan was coming from, but it wasn’t the brutal burn she was looking for to own the libs. Because that’s obviously what’s important right now and not, oh I dunno, Donald Trump once again asking a foreign power to interfere with an American election.

McCain complained that she had been subjected to criticism from Bernie Sanders supporters who approved of WikiLeaks dumping hacked emails online to hurt Hillary Clinton’s election chances.

“I was taken to task by many Bernie supporters who think it’s okay, and people who have difference of opinions,” McCain said. “I believe you, in particular, and I don’t want the speak for you, but I know you and I diverge on that issue, and it has to be condemned all the way around, and I get frustrated when I do that because I think all interference from foreign adversaries in our country is dangerous and should be illegal.”

“There’s a lot of people on the left that are okay with Julian Assange,” she added, but aren’t okay with this whistleblower.”

Okay, so here’s the issue: Meghan is correct that the Extremely Online Left love Assange and were cool with him trying to take down Hillary Clinton. Those people exist, but they are not at all representative of the Left or liberals or whatever we’re calling reasonable Democratic voters who want more socialist policies, but without going full communist Russia. (Stranger Things and Chernobyl radicalized me to say that.) Meghan’s talking about a very fringe, but very vocal minority, and if she had any sort of analytical skills whatsoever besides being shot out of John McCain’s dick, she would know that.

As for saying online lefists are “mad” at this whistleblower, I don’t know if I’d go that far. Are some of them being contrarian dickbags who really hope that this story is nothing because it behooves them to act like Trump isn’t that bad after not showing up for Hillary? Sure. But again, we’re talking about a small percent of the Left, or whatever, who like to pretend they’re galaxy brains on the internet and aren’t at all indicative of the opposition to Trump despite Meghan trying to paint them as such. Shit, most of the time DSA Twitter is actively trying to tear down the Democratic Party, which is why she loves them and actively fuels their attacks on candidates. — “Kamala is a cop” T-shirt, anyone? — That said, if toxic BernBros are the spark that finally caused Meghan to run back to her room and slam the door? Keep those dank memes coming but pull the plug on the racism. You guys gotta stamp that shit out.

Anyway, the official View clip hit just as I wrapped this piece, and sure enough, it cuts right before Meghan storms off, but you can watch Ana Navarro shut her down after nobody on the panel knew what the hell Meghan was saying, which she was somehow self-aware enough to realize. If I’m being honest, that’s the real surprise. Daddy’s nepotistic little rhino can read a room? Holy shit.

← Review: How Can a Movie Starring Nic Cage and Cocaine Be As Lousy as 'Running With The Devil'? | Review: Brad Pitt Reminds Us Why He's a Star in 'Ad Astra' →