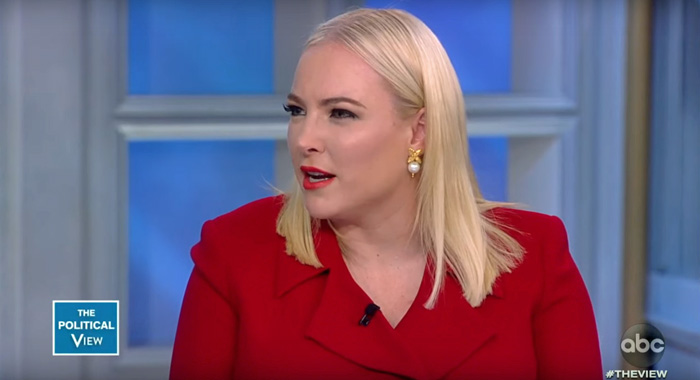 One of my favorite things about The View is how easy it is for almost any guest to dunk on Meghan McCain. Christ, Pamela Anderson got the best of her with nothing but a bucket of Julian Assange horseshit and some eye smoke. It’s like sparring with a toddler if toddlers lived on a steady diet of Jell-O shots and Federalist articles.

I was giving Meghan a rest because her squawking has become so predictably redundant that it’s not worth commenting on — Was it ever really though? — but it’s Cyber Mayo-day, so when in Rome. Here she is getting effortlessly wrecked by Senator Amy Klobuchar, which is a delicious spot of irony considering Meghan praised Klobuchar when she entered the race and glowingly referred to her as a “bad bitch.” Naturally, Meghan also slapped herself with the same label, so it was particularly fun to watch that categorization instantly disintegrate like it was never even there. Via The Daily Beast:

McCain kept pushing, however, telling the senator, “Part of the problem, though, is that I think there was an idea that Democrats have gotten out over their skis with Mueller and that the American public and, you know, because you live in the real world and you represent, you know, a Midwestern state, that people are so inundated with so much information that they just think it’s a witch hunt, and that’s why Nancy Pelosi was hesitant to go through with it. So do you worry about Democrats getting over their skis a bit?”

“I guess what I want to know is, where can we send him next?” Klobuchar asked with a smile.

So right off the bat, I don’t know why the hell Meghan keeps using the ski analogy, but I do know why she keeps trying to assert that impeachment is going to tank Democrats in 2020, and the answer is two-fold. One, she’s a moron who desperately wants to look like she’s not a moron, but being a moron keeps getting in the way. Two, she’s a Republican who doesn’t care who’s in office as long as it’s a Republican. She can talk as much shit as she wants about Trump and squirt out a few crocodile tears while pretending to confront his chinless ratf*ck of a son, but at the end of the day, Meghan will fall in line with the party just like MY FATHER™. And I’ve probably mentioned that at least a thousand times by now, hence the growing scarcity of these columns. There are only so many ways you can say, “Hey, this spoiled gargoyle in makeup is Queen of the White Power Harpies.”

However, to Meghan’s credit, she manages to accept her defeat quietly instead of engaging in the McCain family tradition of a horrifying plane wreck that ends in torture. But that’s boring as hell, so I’m going to reiterate how great The View is without Meghan. Here’s Sen. Klobuchar giving an informative, if not slightly dry explanation of the impeachment hearings, which the more the American public learns about the better. I can’t believe I’m saying this, but The View is actually helping by educating daytime audiences on this subject. What makes it even more of a compelling discussion is Meghan doesn’t say one goddamn word the whole time. In fact, the only thing she does is aggressively chug from her coffee mug the second Klobuchar mentions gun control, as if that’s going to do something. “Mmm, aren’t you thirsty, Senator? I sure am thirsty. You know who else got thirsty a lot? My father John McCain. Nothing more American than being thirsty! Glug glug glug…”

Here’s the part where Meghan pulls her ski analogy bullshit that goes absolutely nowhere in case you want to see all the words I just wrote happen with moving pictures. No judgment.

← Save the Peloton Ad Lady from Her Horrible Husband | 'The Mandalorian' is just 'Renegade' in Space (Baby Yoda is the Duster, Obviously) →