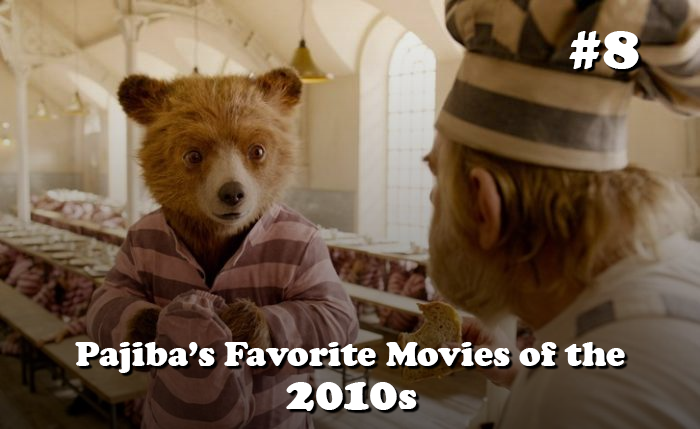 In early 2018, grown-ups had a lot of reasons to feel stressed out, angry, frightened, and overwhelmed. A litany of alleged abusers and rapists were being exposed by the Me Too Movement, sparking shake-ups in Hollywood, Fox News, and beyond, and spurring a lot of intense conversations over sexual misconduct. Among those accused, President Donald Trump was using Twitter to issue thinly veiled threats of nuclear war against Kim Jong Un, denounce the Mueller investigation and the press, and declare himself a “very stable genius.” In the UK, Brexit negotiations fueled tensions and xenophobia. Scientists proved (again) that global warming is real and running humanity toward disaster. Then, into all this, came a bear in a floppy hat, precious peacoat, and a love of marmalade. Paddington 2 proved a light in our darkest of days.

It’s not just that this much-anticipated sequel to the 2014 hit Paddington was richly charming, studded with slapstick, laced with whimsy, and stuffed with stars like Ben Whishaw, Hugh Grant, Hugh Bonneville, Sally Hawkins, Julie Walters, and Peter Capaldi. What made Paddington 2 so perfect for this darkest timeline was that it recognized how ruthless the world can be — even to the best of people — and gave us a roadmap on how to cope.

In Paddington 2, this adorable ursine lives with his adoptive family The Browns in Windsor Gardens, a neighborhood of which Paddington is a crucial part. He provides a hangry-preventing breakfast for a cycling neighbor. He helps the garbageman prep for his taxi driver written exam. He keeps an absent-minded doctor from forgetting his keys. And when this little bear takes to window washing to earn the funds for a special gift for his dear Aunt Lucy, he shines a pivotal light on a lonely Colonel, inspiring new love with the chipper newspaper vendor. The only one who questions Paddington’s position is self-proclaimed block captain Mr. Curry, who sneers at him as an “undesireable” who can’t be trusted.

Still, Paddington perseveres, making friends wherever he goes, including prison, after being framed by a theatrical thief, and railroaded by a spiteful judge. In the big house, his colleagues are grimacing, growling, and glowering tough guys with nicknames like T-Bone, Charley Rumble, and Knuckles McGinty. Paddington gets off to a rough start when he accidentally dyes all the black-and-white striped uniforms a Wes Anderson-approved pink. Things only get worse when this curious cub questions the menu of the snarling chef, Knuckles (Brendan Gleeson). But Paddington stays true to the lessons of his Aunt Lucy: “If you’re kind and polite, the world will be right.” It’s a mantra that pulls him forward and proves prophetic.

Stripped of all its cuteness, Paddington 2 has a grim premise. A Peruvian immigrant who has found a home, family, and work in the UK is ripped away from it all by a prejudiced justice system. He’s lost his life, his freedom, and his good name and thrown into a dangerous prison environment with no hope of escape. Yet Paddington persists. It’s not that he doesn’t experience fear, sadness, or anger. It’s about how he chooses to deal with these feelings.

In the face of cruelty, he offers patience and kindness. Even when the prisoners set him up for a likely thumping at the hands of Knuckles, he strives for friendship and harmony by sharing his family’s marmalade recipe. This act of good will sparks community within the prison, as they begin to share their own gifts and family recipes. Then, a joyful musical montage shows the transformation. Grimacing goons turning into smiling friends. The cold cafeteria becomes a cozy cafe, festooned with delicacies and pretty pastries. Even the cell block changes, as flower pots line the guard rails and the warden reads bedtime stories over the broadcast system to lull his inmates into sweet dreams.

That is not to say sweetness is always the way to get results. When Knuckles insults Aunt Lucy, Paddington responds — not with violence or name-calling — but with a hard stare, another thing learned from Aunt Lucy. Paddington doesn’t deny his bad feelings. He doesn’t ignore them. He recognizes them, and then considers what he can do about them. When it comes to the fear of enraging his cellmates, his ‘what-he-can-do-about-it’ was making friends. When it came to someone insulting the mother who raised him, it was showing that such behavior was not acceptable. Paddington doesn’t sink to the level of those who would offend or hurt him. When they go low, he goes hi! In doing so, he builds a community in prison just as he did at Windsor Gardens. And that community becomes pivotal as Paddington breaks free not once, but twice.

As the hard stare shows, being kind and polite doesn’t mean being a pushover. Sometimes, it doesn’t even mean playing by the rules. With help of three prison buddies, Paddington breaks out of the peneitentiary to prove his innocence. However, his friends have no faith in a system that railroaded this dear bear to begin with, and urge him to go on the lam with them. Paddington won’t leave behind his family, the Browns, so he races into a spectacular showdown with the nepharious Phoenix Buchanan (Hugh Grant). As he is a white male celebrity adored for being famous if nothing else, it will take more than one little bear to bring down this Phoenix. In fact, it will take each member of the Brown family and their unique set of skills — from steam engine knowledge, to photography, to ball-pitching, chakrabatics, and long-distance swimming — to defeat this arrogant rogue. Even after all that, more is demanded to rescue Pattington from an underwater grave.

Aboard a racing train, Phoenix ditches Paddington in the caboose, then sets it loose! The out of control car crashes off the rails, missing a bridge, and plummetting into the river below. Without missing a beat, mother Mary Brown (Hawkins) dives in after the sinking Paddington. But the door to the train car is padlocked, and their prying hands cannot break its hold. Silently, the mother and adopted son look to each other, the dread and grief hanging heavy like that darn lock in the unforgiving water. Then, the familiar grumble of the gruff but lovable Knuckles is heard! In the nick of time, the escaped cons dive in after Mary. Together, they all pry at the door and pull the poor bear to safety. In the end, Paddington awakes in his own bed at the Brown house to discover not only has the family exonerated him, but also his neighbors have pitched in to bring his adored aunt to London for the reunion Paddington had only dared dream of before.

Paddington 2 is a story so sweet it warms the cockles of the most hardened heart. Moreover, it’s a story that offers a path to hope. Just as Paddington recognizes his negative emotions, this children’s film recognizes some of the truly terrible things in this world, from xenophobic bias to corrupt justice systems, to life going (literally) off the rails. Then, it shows us a fuzzy David fighting back against the Goliath of these big problems, not with a sling shot but with a warm heart and a hard stare. One person alone may not be able to change the world. It’s not easy to choose kindness in the face of cruelty. Paddington shows us how one act of good will might spark another, building a community where people care for each other and can enact great good together. Though it’s about a little bear, Paddington 2 entreats us to remember our humanity and that of others. Or, as Aunt Lucy would say, “If you’re kind and polite, the world will be right.”