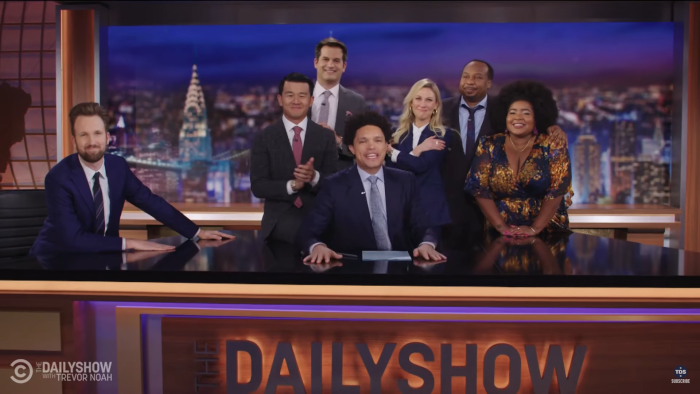 Trevor Noah Says His Goodbyes To 'The Daily Show'

Trevor Noah did not make a big deal out of his exit from The Daily Show. Everyone else did. It was sudden, surprising, and a bit of a bummer. Noah has grown comfortably into his role as the host. Ironically enough, he hit his stride when lockdown started, recording the show from his home and in hoodies. That time also influenced his decision to leave the show. Time is precious, and Noah wants to spend more of it with family and traveling the world. So, he hosted his final episode of the show last night, saying goodbye to his friends and coworkers.

There wasn’t a lot of fanfare in this episode. Noah didn’t have a famous band or big celebrities. He talked to the people he worked with. He did bits with some of the funniest people on television. Noah left his mark on late-night, but he couldn’t have done it without the likes of Michael Kosta, Desi Lydic, Ronny Chieng, Roy Wood Jr., and Jordan Klepper. His tenure was spent surrounded by a crew of immense talent, and it was truly touching that he turned the focus to them.

I’ll be honest and say that I spent most of this segment in tears. I didn’t expect to. Things start pretty silly, and maybe Michael Kosta is just an excellent poker player because he didn’t seem to break at all. It was the emotion from Desi Lydic that sent me over the edge. The sincerity from the rest of the crew just got harder to bear from there. I’m still crying as I’m writing this. It was such a set of sweet goodbyes.

We also get a Klepper on the street bit, in NYC, which doesn’t make me embarrassed to live here! Klepper went out the day of Trevor’s last show and asked New Yorkers what they thought of him leaving. Aside from one guy who turned the conversation to Jimmy Fallon, you get New Yorkers doing what they do best, giving their opinions.

Farewell, Trevor. You will be missed.