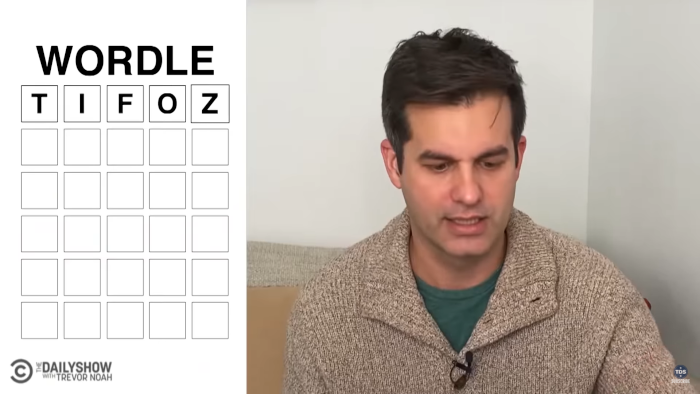 'The Daily Show' Gets Into The Wordle Craze

Even though I’m Totally hip and with it, now and then, popular things evade me. I’ve never seen any of the Jurassic World Movies. I never read The Da Vinci Code. Now, I’ve never played Wordle. I’ve seen the grids going around Twitter, but I’ve refused to investigate further. It seems to have taken everyone by storm. So, what is it? Michael Kosta of The Daily Show has the answers. Kinda.

Kosta starts the video like any other introductory video. He’s going to teach Wordle in a way that’s fun and accessible. He starts to play the game and all he needs is a five-letter-word. Any word, apparently. You just choose a five-letter word and that’s how Wordle starts. The snag is… Kosta can’t think of a single one.

What follows is a bout of frustration, regular among some Wordle players I’ve seen. When the game fires up, people can’t think of a five-letter word. Between this frustration and the idea that I think you have to post your scores online(?), I don’t think I’ll ever be a Wordle… er. Y’all enjoy, though.

What makes this sketch more than just a jab at a fad is Michael Kosta. He has really carved a niche for himself on The Daily Show team. Any time he’s onscreen is funny. Every bit he’s in is packed with energy and believability that sells even the most absurd premises. Like, a swath of people treating a word puzzle game like it’s the next Pokemon.

Maybe I’m bitter that I’m not into the game even though everyone else seems to like it? I don’t think that’s right.

It’s everyone else who is wrong. Boom! There’s a five-letter word.