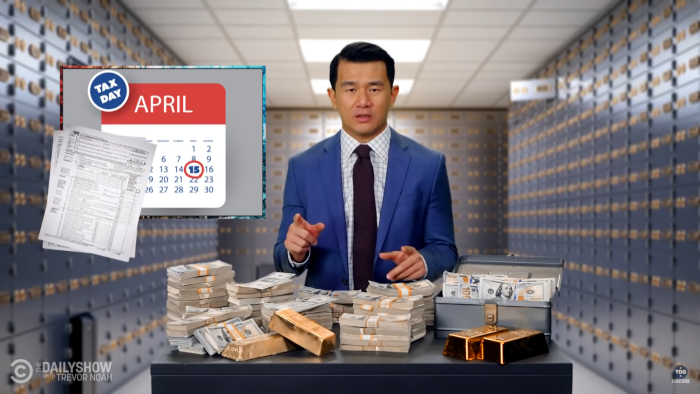 Tax season has come and gone. If you’re like Ned Flanders, you were up nice and early on January 1st, preparing your papers for the IRS. If you are not a cartoon character, you had to spend hours upon hours double-checking, collecting, and filling out forms. You even wondered why you don’t try that Cayman Islands thing everybody in the movies talks about. The American tax system is messed up, and Ronny Chieng is here to drive that point home.

In the latest edition of Chieng’s The Daily Show segment “America: WTF”, he explained the flaws in our tax system. Americans are forced to calculate their taxes in a weird guessing game. If they guess wrong? Fines, jail time, or if you’re rich, nothing? It’s frustrating as hell. It is even more frustrating when you hear how other countries do it. I want my government to just send me a tab! They’d likely find a way to screw it up, but it would still be nice.

Something else Chieng gets into is the size of our money. Usually, I would dismiss this argument. Who cares what shape money is? But as Chieng points out, different-sized money can help people who are blind. I’m embarrassed to say that that thought never even crossed my mind. It does not surprise me that America would fail to take accessibility into account, though. Hell, some people were mad when we tried to put Harriet Tubman on a $20 bill instead of Bloody Bloody Andrew Jackson.

America’s finances are long overdue for a change. However, that change is not likely, so expect more videos like this in the interim.