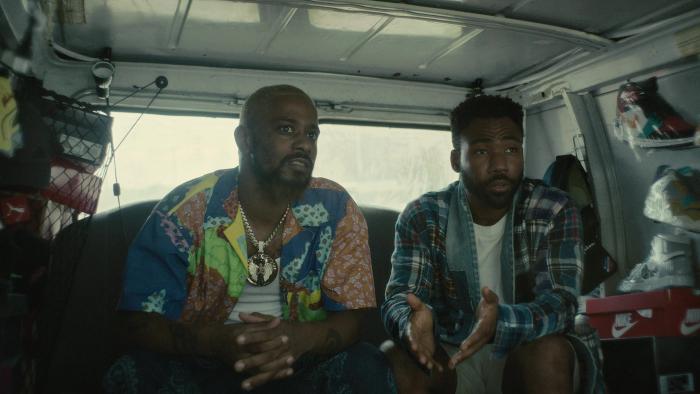 The Latest 'Atlanta' Features Yet Another Problematic Male Celebrity

Previously on Atlanta: Van takes a friend’s advice and decides to act as an extra in a television show. She brings Lottie with her, and when Lottie interrupts production by yelling at one of the actors, she impresses Mr. Kirkwood Chocolate, the mysterious and reclusive director/writer/producer who owns and runs his movie/television studio, Chocolateland, and he immediately casts her in the show. Much to Van’s increasing disapproval, Mr. Chocolate wants her around to appear in more of his productions, and the two of them end up butting heads over Lottie’s future.

THE STORY SO FAR: A serial killer has been targeting people who have recorded and posted YouTube videos of themselves dancing to “Crank That” by Soulja Boy back in the day. Unfortunately for Paper Boi, he also recorded a YouTube video of himself dancing to “Crank That” when he was younger, and he starts wondering whether he’s next on the killer’s list. Meanwhile, Earn and Darius are on the hunt for some hard-to-find Nikes and they end up crossing paths with a sneaker reseller who has exactly what they’re looking for … and they come with a price that has nothing to do with money.

WHAT’S GOOD ABOUT THIS EPISODE?: Paper Boi rejecting Darius’ advice about living off the grid like Jack Reacher: “I ain’t no hipster living with his sister’s girlfriend’s cousin picking boysenberries or some sh-t. Nigga, I’m rich.” Darius and Earn teasing Paper Boi about his need to have cable and streaming so he can watch the news. (“You want to know who died? TMZ. You want to know who’s canceled? Twitter. You want to know what’s going on in the Black community? The Shade Room comments section, or Lipstick Alley.”) Seeing a younger, drug-dealing Paper Boi actually dancing to “Crank That.” Paper Boi willing to pour a bottle of Hennessy all over the very expensive mixing boards and recording equipment in order to avoid any possibility of recording a track with Some Guy Named Doug. (Yes, that’s his actual rap name, like A Tribe Called Quest or A Pimp Named Slickback.) Paper Boi watching his old “Crank That” video on his phone, and seeing that the only comment is a death’s head skull emoji from someone whose initial is “A.” (Is this episode really just a backdoor pilot for another Pretty Little Liars spin-off?)

Paper Boi calling Soulja Boy to find out if he knows anything about the “Crank That” murders and finding out that he’s actually packing up everything he has (including his illegal video game systems that almost got him sued by Nintendo), and is leaving town to hide out at his ‘safe farm.’ (“A farm that’s safe? If you don’t got a safe farm, you good as dead. You know … ‘Like a good nigga, Safe Farm is there.’) Paper Boi learning that if you’re a celebrity trying to blend in with the rest of the regular-degular public, don’t wear baseball caps with no logos on them, or else you’ll end up being recognized just like Chris Evans. (And also that only crackheads buy belts with the digital display belt buckles on them.) Earn and Darius meeting The Shoe Man, who has the exact sneakers that they’re both looking for, and in the exact size, and the cost of those sneakers? The Shoe Man just wants to see Earn and Darius kiss. (Darius is very open to it, whereas Earn is like, “Absolutely f-cking not!”

Paper Boi being spotted by the Crank Dat Killer, who kinda-sorta looks like The Weeknd, and takes out a pistol to fire at him in the middle of the crowded mall. This is where several other people, including a woman with a baby carriage, take out their own pistols and return fire. Earn and Darius, after haggling with The Shoe Man over how long their kiss has to last, finally deciding to go ahead and just do it (while The Shoe Man has “All My Life” by K-Ci & Jo-Jo playing in the background on his radio), only for The Shoe Man to be shot and killed by a stray bullet from the Crank Dat Killer’s pistol while they’re kissing. Some Guy Named Doug coming to Paper Boi’s rescue by rolling up next to him in his car and driving off to safety. Earn, Darius, and Paper Boi discussing that the person shooting at Paper Boi was actually just an old rival of his from high school, and not the Crank Dat Killer, who was caught by the police and is an entirely different person. Paper Boi actually recording a song with Some Guy Named Doug to thank him for saving his life … and as expected by everyone who is familiar with Doug’s music, it sounds like absolute trash.

WHAT’S NOT SO GOOD ABOUT THIS EPISODE?: I’ll get to that at the end of this recap.

ANY CAMEOS FROM THE CAST OF COMMUNITY? No, there are no Community-related cameos, but Soulja Boy actually appears in this episode.

SOULJA BOY? SERIOUSLY? DOES HE TALK ANY MORE SH-T ABOUT DRAAAAAKE?: Yes, he is in this episode, and offers Paper Boi some advice about getting his own ‘safe farm’ so he can hide out from the Crank Dat Killer or anyone else who is looking for him. (Hawkeye had one in Avengers: Age of Ultron, and it worked out pretty damn well for him, his family, and the rest of Earth’s Mightiest Heroes)

IS MR. CHOCOLATE IN THIS EPISODE?: No, he is not.

HOW MANY F-BOMBS WERE THERE IN THIS EPISODE?: One or two, considering that a gunfight happens at the mall that makes this episode feel like Boogie Nights.

ON A SCALE OF 1 TO “WHAT THE HELL DID I JUST WATCH?” HOW WEIRD AND TERRIFYING WAS THIS EPISODE?: I’d probably give it a five.

ANY TIME-TRAVELING ALIENS IN THIS EPISODE?: No, and there are no cast members from The Goldbergs in this episode, either, so Dustin, you can relax.

HOLD UP, WAS THAT ACTUALLY CHRIS EVANS IN THIS EPISODE?: No, that wasn’t Chris Evans (whose luck wearing baseball caps in public to remain anonymous isn’t as good as that of Captain America or his fellow heroes in the Marvel Cinematic Universe). This was just another joke made about Chris Evans, the first one being in “New Jazz” last season, and he has never been asked to be on Atlanta. This is kinda unfortunate, as Chris Evans recently gave the impression that he would’ve loved to be in an episode.

WHAT EXACTLY WAS THE DEAL WITH THAT CHARACTER WE MET IN THE EPISODE, THE ONE WHO WAS TRYING TO BREAK INTO THE RAP GAME?: Roberto is an employee at a fast-food joint in the mall who is hoping to get his big break as a rapper in order to support his girlfriend and his baby daughter, so that they no longer have to live at his mother’s place. Much like B-Rabbit in 8 Mile, he believes that he just needs one shot and one opportunity to prove himself worthy of a record deal … and that one shot/opportunity comes when he finds out during his shift that Paper Boi is at the mall. This does not work out in his favor, as Roberto makes the huge mistake of trying to spit lyrics at Paper Boi when he is literally running from his gun-toting high-school rival … and his only reward is getting mushed in the face and sent flying through a plate-glass window.

Frankly, if your own instincts for self-preservation are that nonexistent for you to ignore loud gunfire and Black people running for their lives, all so you can audition your rap lyrics for someone who is clearly running for his life and doesn’t have time for your bullsh-t? To quote Velma Kelly, and the five other merry murderesses of the Cook County Jail:

SO WOULD YOU KISS ONE OF YOUR MALE FRIENDS FOR A RARE AND EXPENSIVE PAIR OF SNEAKERS?: ………. Depends on which of my male friends is with me when this offer is made, and if I actually think they’re attractive.

TO SUM IT ALL UP: Another solid and hilarious episode, this one not only touching upon how your actions on the Internet, no matter how big or small, can easily come back to haunt you, but also touching upon the things that we’re willing to do for something that we give way too much value to, whether it’s sneakers, those limited edition Mondo posters, or tickets to see Spider-Man: No Way Home on opening weekend. (The latter certainly isn’t new, especially if you’re old enough to remember the “What would you do for a Klondike bar?” commercials that always aired on television) Depending on who you ask, the biggest problem with this episode is the fact that Soulja Boy is actually in it.

Much like Chet Hanks, Liam Neeson, and the late Kevin Samuels appearing last season, Atlanta once again has another problematic male celeb showing up for a guest spot. As funny and effective as it may have been for him to be in on the joke and to be a part of it, it still doesn’t change the fact that Soulja Boy, outside of his many legal and personal skirmishes, has been accused more than once of physically and sexually abusing women. This is enough to make you wish that more producers, directors, and showrunners would be a lot more serious about having a “No A—holes on Set” policy, and making sure that it stays enforced, no matter how much you may want a certain celebrity to be a part of your project.

(deep, heavy, Negro spiritual sigh) Fingers crossed that Chris Brown or Trey Songz don’t show up on Atlanta as we get closer and closer to the series finale next month.

“Lose Yourself” by Eminem…

And “Somebody’s Gotta Die” by The Notorious B.I.G.


← Twitter Users Ponder the Most Attractive a Man Has Ever Been in Film | In 'God's Creatures,' A Mother Has to Choose Between Her Son or the Truth →