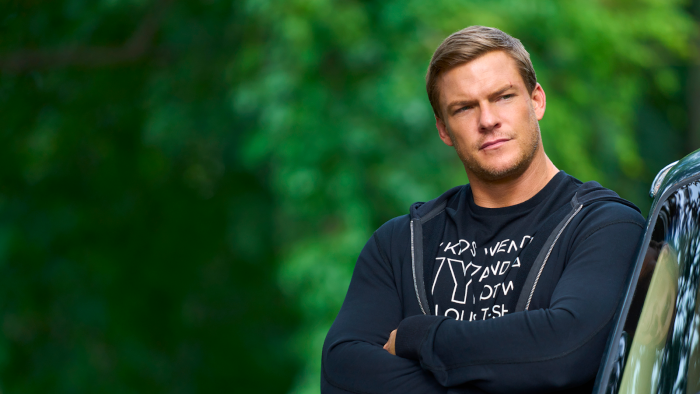 'Reacher' Is a Resoundingly Successful Adaptation of its Source Material

There’s a line in the Murder By Death song, “I’m Coming Home,” wherein lead singer Adam Turla growls “Turning brick walls into doors, I’m coming home.” That idea of “turning brick walls into doors” is often what I’d think about when I read Lee Child’s seemingly endless series of novels featuring the nomadic ex-military policeman, Jack Reacher. Reacher is an implacable, nigh-invincible mountain of a man (listed in the books as 6’5” and weighing over 250 pounds) who wanders the country, righting wrongs and punching his way through mysteries in a gloriously pulpy fashion. The franchise was briefly adapted into a vehicle for Tom Cruise via two films that, while not terrible, were decidedly NOT Reacher.

Enter Amazon, and their newest series, Reacher. Going all the way back to the beginning, they’ve made an eight-episode season based solely on “Killing Floor,” the very first Reacher novel. Trading Cruise in for the far more imposing Alan Ritchson (recently seen as Hawk in DC’s “Titans”), Reacher is a resoundingly successful adaptation of its source material — for better or worse. Ritchson nails the fundamentals of Jack Reacher — he’s physically imposing, huge and built like a brick shithouse. He carries the unflappable confidence of a man who’s got the odds figured out well before his opponents do, and who matches his brawn and skill with a meticulous investigative mind and keen instincts.

The series kicks off with Reacher wandering into Margrave, Georgia, and almost immediately being wrongfully arrested for murder. He’s quickly embroiled in a mystery involving crooked cops, corrupt politicians, out-of-town hitmen, and the criminal machinations of the town’s largest employer. He gains tenuous allies in the recently transplanted Detective Finlay (Malcolm Goodwin), and Officer Roscoe Conklin (Willa Fitzgerald), who also ends up being the inevitable romantic interest. It’s a twisty story of corruption and murder, and bodies pile up steadily along the way as Reacher continues to investigate against all odds (and against almost everyone’s warning).

It’s all a fun, pulpy, often brutally violent romp whose swings hit more than they miss. Ritchson takes on Reacher’s persona flawlessly, equal parts smug self-confidence and dogged determination. His physicality serves the series’ fight scenes well, and it’s a visceral thrill to watch him plow through a room full of hardasses without remorse or regret. At the same time, instead of simply being a human Maslow’s Hammer, he’s also weirdly brilliant, with Batman-like deductive powers and a dogged need to know what happened. Reacher wants to punch his way through his enemies, but only after being absolutely certain that he’s punching the right ones.

The supporting players are all gamely along for this vicious, pulpy, sometimes outright silly ride, and the shining star of the bunch is Willa Fitzgerald as Roscoe, a take-no-shit deputy who spends the series being somewhere between admiring and exasperated of Reacher’s bull-like approach. Perhaps equally interesting is the addition of Maria Sten as Frances Neagley, another former MP with some surprising character traits and a delightful sibling-like rapport with Reacher. Neagley features prominently in several of Child’s novels, but isn’t actually in “Killing Floor,” yet her addition to the series is welcome and enjoyable.

There are hiccups, some due to the novel itself and some due to other factors. There’s an almost game-breaking coincidence that drives the central plot (no spoilers!) that can sometimes be hard to swallow. There are some extraneous flashback sequences that don’t really serve the story and feel more like filler than anything else. But thanks to Amazon’s reliance on shorter, tighter seasons, it never bogs down too much, and the pace is generally brisk and exciting. Reacher isn’t a game-changer by any means, but if watching a clever, brash, often-shirtless hulk of a man hammer his way through a mystery is your bag, then you’re definitely in for a treat.


← Netflix's 'Murderville': Improv is About to Have a Moment, Isn't It? | Review: Netflix's 'All Of Us Are Dead' Doesn't Need A Second Season, But It Deserves One Anyway →