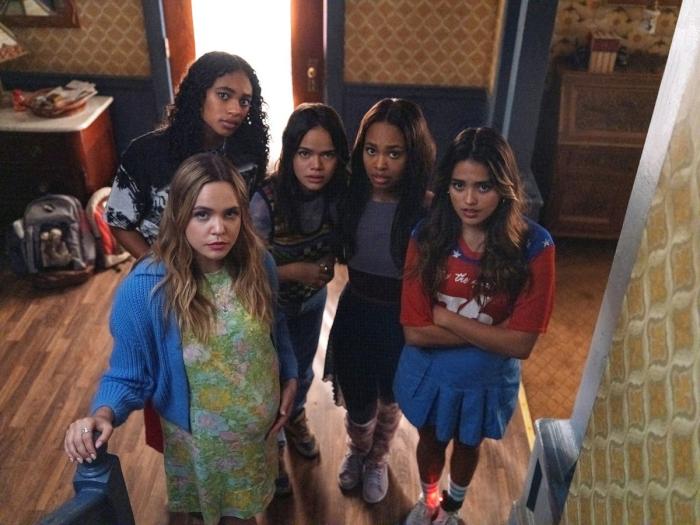 Pretty Little Liars: Original Sin comes from Riverdale creator Roberto Aguirre-Sacasa. You’d think that after six seasons of that genre word salad that I’d steer far clear of this HBO Max series, but I’m the same person who has watched ten seasons of Ryan Murphy’s American Horror Story, 11 seasons of The Walking Dead and its spin-offs, and fought for the renewal of a show I hated. Fool me once, shame on you. Fool me twice, and I’ll just keep watching.

The thing about Pretty Little Liars: Original Sin is that, through its first three episodes, it’s a lot like the first season of Riverdale and the first five episodes of every season of AHS: Compelling, addictive candy that will almost certainly fall apart midway through the season when Roberto Aguirre-Sacasa decides to introduce an alternate dimension and a cataclysmic comet strike. But for now? It’s like a ’90s horror movie has been turned into a television series whose pop-cultural references feel like they are being spoonfed to its intended Gen Z audience by a Boomer.

Pretty Little Liars: Original Sin is the fourth entry into the Pretty Little Liars franchise, but don’t worry if you haven’t seen any of the previous ones: Neither Roberto Aguirre-Sacasa nor co-creator Lindsay Calhoon Bring were involved with those shows, either. While Original Sin takes place in the same universe of stories based on the novels of Sara Shepard, no knowledge of that universe seems necessary, although I suspect that the occasional nod to the original Pretty Little Liars goes over my head.

The series follows a group of teenage girls, who are being stalked and murdered by a serial killer known as “A.” The mothers of these same teenage girls were involved in a tragic incident in which their bullying led to the suicide of a classmate during a Y2K party in 1999. Presumably, “A” — who bears some resemblance to a Peeping Tom Leatherface — is killing these teenage girls because of the sins committed by their mothers.

“A’s” motives are likely not limited to the actions of their parents because the girls in the present are also bullies. Karen Beasley (Mallory Bechtel) is the queen of the Plastics who is shitty to anyone who opposes her, including her best friend, Imogen Adams (Bailee Madison), with whom she has a falling out after Karen’s boyfriend kisses Imogen. Imogen is a pregnant teen who is on the outside of the popular circle after being ostracized by Karen. Imogen’s mom also took her own life or was murdered after receiving a flyer for the 1999 Y2K party from “A”.

Imogen befriends several other girls with whom Karen takes issue, and they bond over their shared hatred of Karen. “A,” meanwhile, works behind the scenes to further drive a wedge between the girls so that they turn on each other, which makes them easier to murder and/or frame for murders.

Basically, it’s Mean Girls/Carrie crossed with I Know What You Did Last Summer a generation removed, both in its setting and execution. It also does what Ryan Murphy and Roberto Aguirre-Sacasa often do, which is to squeeze as many genres of horror as possible into one season of television, although fortunately, Original Sin hasn’t gone supernatural. Yet.

It’s not a great show, and it often feels like someone’s parents trying to make TikTok videos, which is fine because there are probably more adults watching than teens, who increasingly get all their content needs from YouTube and social media and not HBO Max. However, in an era where so much horror is “elevated,” it’s vaguely refreshing to see an old-fashioned slasher that doesn’t aspire to be anything more than Jason Voorhies killing off Heathers.