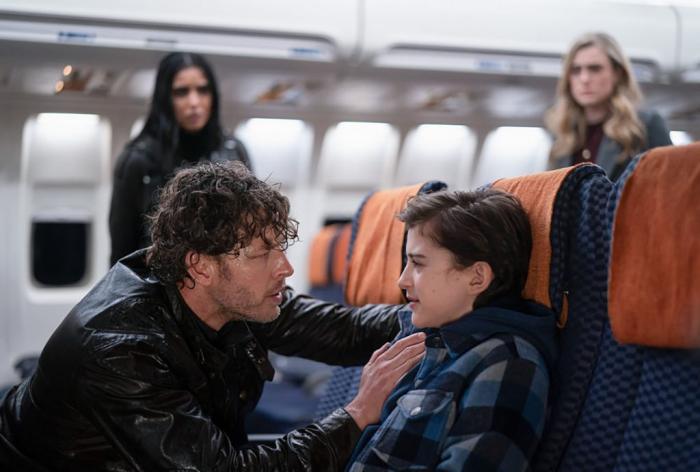 Late last night, Deadline reported that NBC had canceled its supernatural conspiracy thriller, Manifest, after three seasons. It was confirmed by Jeff Rake early this morning.

I’m devastated by NBC’s decision to cancel us. That we’ve been shut down in the middle is a gut punch to say the least. Hoping to find a new home. You the fans deserve an ending to your story. Thanks for the love shown to me, cast, and crew. #savemanifest

The network canceled the series despite the fact that it was by far the highest-rated of their four bubble shows (all four are serialized, and three have been canceled, including Debris and Zooey’s Extraordinary Playlist, although the fourth, Good Girl, seems likely to return). Meanwhile, Manifest debuted on Netflix last week and immediately shot up to the top spot among their most-watched movies and television shows, where it remains, as of this writing.

Now, if you’ve seen any of my coverage of the series over the last three years, you might think this decision would bring me joy, or at least a sense of relief. You’d be wrong, and it’s not exactly because I’ve grown fond of the weekly hate-watch (although, there’s that, too).

The reality is this: This is exactly why viewers have lost faith in network television. It’s one thing to give a big conspiracy thriller an opportunity and cancel it after one season (as NBC did with the nonsensical Debris), but you can’t string along millions of viewers (and add millions of more on Netflix) and then pull the goddamn rug out from underneath them. There are a lot of people who (inexplicably) love this show, and I know, because I have gotten a lot of emails from them demanding that I quit this profession over my recaps. I haven’t received this much hate mail since that time I said something borderline negative about Joe Rogan or that time I failed to afford the same affection for Jared Padalecki as I do Jensen Ackles (it really is all or nothing with that fandom).

But it’s less about this specific show, and more what it continues to mean for broadcast network television, which continues to pander to broader audiences but nevertheless refuses to honor them. I don’t care how good or bad it is, but if you give a serialized drama with an endpoint, you owe it to your audience to follow through. NBC didn’t have to give Jeff Rake the six seasons he wanted to tell his story, but they owed him a heads up. They owed him an opportunity to land the series. They didn’t have to give him the world, but the least they could have offered was a “shortened fourth and final season” so that he could conclude his story, so that all those people who jumped aboard the Manifest plane last week on Netflix aren’t left with their junk flapping in the wind.

I know that it all comes down to “business decisions,” but this decision is bad for NBC. It’s bad for broadcast network television, which is already a wasteland of reality television and police procedurals. I didn’t like Manifest, but at least it was different. It wasn’t a Chicago or L&O series. At least it tried to do something besides solve cold cases or put out f**king fires. The only reason I was able to recap it for three years is because not every single episode followed the exact same blueprint.

You don’t see that on network television anymore. All the conversation about television surrounds Netflix, Disney+, Amazon, Apple TV, Hulu, and HBO/Discovery — and that’s where all the awards go, too — but broadcast network television still commands a relatively huge audience. The networks don’t have to just cling to their aging audiences and die out right along with them. NBC, ABC, CBS, or Fox could actually decide to reinvent themselves as free alternatives to the streaming networks. There’s no reason why the next Ted Lasso or Mare of Easttown couldn’t debut on a network and command a much larger audience — Grey’s Anatomy and This Is Us are watched by way more people than anything on HBO Max — except that the networks have given up. They have decided to crawl into their caves and wait for the sun to burn out. Broadcast network television is dying, but the gunshot wounds are self-inflicted. The cancelation of Manifest is just one more stab to the abdomen, and one less reason to ever, ever allow ourselves to get invested in anything even remotely serialized or interesting or different on a network. We’re done. Why bother?

I did not like Manifest, but I am going to miss the hell out of that incoherent goddamn show.

← Chrissy Teigen Wrote Another Apology for Her 'Horrible Tweets' | Conan Welcomes Back Live Audiences And No, You're Emotional →