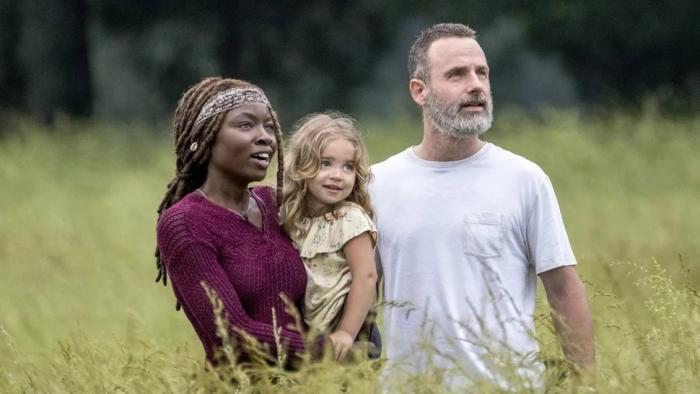 As is almost always the case at Comic-Con, The Walking Dead dropped a big announcement yesterday, namely that the Rick Grimes movies are dead (no surprise) but that, in their stead, AMC will premiere a six-episode Rick and Michonne series next year.

This is mostly good news. Even with the showrunning prowess of Angela Kang, the reliable presence of Jeffrey Dean Morgan, Melissa McBride, and Norman Reedus, plus the return of Lauren Cohan, The Walking Dead hasn’t quite felt the same without Danai Gurira and Andrew Lincoln. With the whereabouts and fates of both characters left uncertain after their departures from the mothership series, it’s a relief that the universe will be able to close the book on the two most famous characters.

My guess is that the Daryl spin-off — set in Europe — will ultimately converge with the Rick-and-Michonne series, as well.

The logline for the Rick and Michonne series is as follows:

It is “an epic love story of two characters changed by a changed world. Kept apart by distance. By an unstoppable power. By the ghosts of who they were. Rick and Michonne are thrown into another world, built on a war against the dead… And ultimately, a war against the living. Can they find each other and who they were in a place and situation unlike any they’ve ever known before? Are they enemies? Lovers? Victims? Victors? Without each other, are they even alive - or will they find that they, too, are the Walking Dead?”

Still, it will be nice to see Lincoln and Gurira again, and I for one am glad it will be a six-episode series instead of a big-screen movie, which never felt quite right for The Walking Dead. I’m also very curious to see whether Gimple attempts to connect their stories with the overall mythology established by The World Beyond and Fear, or if he’ll scrap it all and start all over.

The Rick and Michonne series will join the previously announced Daryl spin-off, the Negan and Maggie spin-off, and the promising Tales of The Walking Dead, as AMC continues to extend the brand.

Finally, the last eight episodes of the mothership are also set to arrive on October 2nd. The trailer looks … good, although the most intriguing part is the twist teased in the final seconds — super zombies — that connects with the variety of zombie we know exists in Europe from The World Beyond.