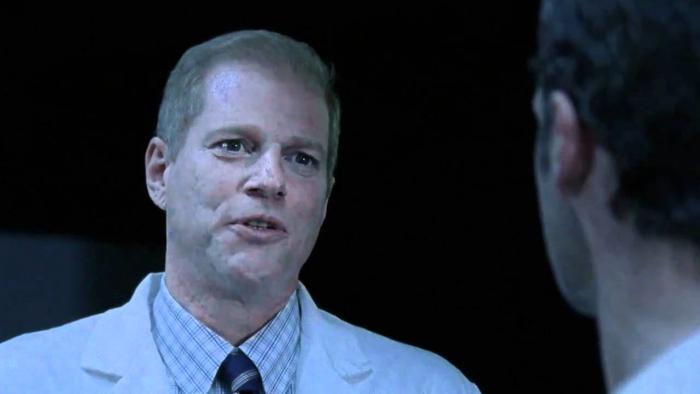 What the Hell Happened in the Post-Credits Scene in 'The Walking Dead: World Beyond' Finale?

Fear the Walking Dead is bringing back a long-dead original character.

We do know more about the Civil Republic, the outfit that abducted Rick Grimes in season 9 of The Walking Dead, but not much that we couldn’t have guessed. They’re an organization like so many organizations in this universe devoted to the “greater good,” and that greater good apparently entails committing genocide on 100,000 people here and there. Resources are scarce and the CRM reckons that those resources belong to those attempting to save humanity, namely the Civil Republic Military (CRM) and the select scientists trying to find a cure for the zombie virus.

Going into The World Beyond, the goal of the CRM was to find a cure for the virus and kill everyone in the Civic Republic’s three communities: Omaha, the Campus Colony, and Portland. The CRM managed to wipe out Omaha and the Campus Colony off-screen at the outset of the series. The World Beyond characters prevented them from taking out the Portland colony (for now) in the finale, although no cure for the zombie virus has been found. The leadership of the CRM also changed. The series began with Elizabeth Kublek (Julia Ormond) as the head of the CRM, and now it appears to be Jadis (Pollyanna McIntosh), the sole spin-off character from The Walking Dead, has taken over as the military leader.

That’s it. That’s the sum total of 20 episodes. The CRM still exists (but under new leadership), and a few of the other The World Beyond characters died, while some survived with the intention of heading to Portland. We may or may not ever see them again.

HOWEVER, there is one post-credits scene at the end of The World Beyond that had nothing else to do with the series itself that appears to be an attempt to set up the Rick Grimes movie or another spin-off. Maybe. Again, I cannot stress this enough: The thing that we have been waiting for two years to see has jack-shit to do with The World Beyond; the after-credits scene could have aired at the end of any random episode of Fear the Walking Dead or The Walking Dead. It would not have made a difference.

In any respect, remember our old friend Dr. Edwin Jenner from the first season? The guy from the CDC played by Noah Emmerich? He’s back in this scene — or rather, a French scientist walks into a room and watches a video with Dr. Jenner speaking. Here’s what he says, and it’s basically all E Pluribus Unum nonsense. Feel free to skip over it:

The problem, as I see it, is that the samples we have simply aren’t fresh. There’s just too many variables involved on how the clock affects them, and even after a few minutes, we— we can’t get an accurate picture of the biology involved, at least from the start. We obviously have seen the end. Again and again. Still, we will have fresh samples soon. That’s a certainty.

Well, in brighter news, I’ve … reviewed the latest data on your side, and the use of cardiac plaques as a host medium for steroidal therapies to jump-start the circulatory system in the hopes of short-circuiting the brain or perhaps regaining function to cause nerve confusion is — is a fascinating approach, and we are all anxiously awaiting anything that comes back from your first trial. We all have to work together here. Solidarity, right?

Fact of the matter is, we only have so many supplies left. We’re not getting any more, so everything counts that much more. Every collection. Every test. I almost broke a petri dish yesterday and almost put my fist through the wall. Glad the “other Dr. Jenner” stopped me. The infirmary is closed. Sealed, actually. We’ve been venturing out for the basics. The “other Dr. Jenner” has gotten pretty damn good at it.

But getting back to the data— the idea of activating systems to work against reanimation is a promising idea. But, as we’ve discussed, the systems themselves have to be studied to see exactly how they’re working or not working… For example, can we build up acids in bodies that don’t have blood flow? Of course, that gets right back to that idea of jumpstarting circulatory systems… We need to do two things simultaneously— observe this and attack this.

It’s mostly gobbledygook. The important thing is not Dr. Jenner. It’s the French scientist watching the video. A man we do not know walks in holding a gun. He speaks to the scientist in French. This scene also clearly takes place in France. The gist of their conversation is this: French scientists were apparently responsible for creating the virus that gave rise to the zombies.

“You started this,” the man says to the scientist. “Then you made it worse,” he adds before shooting her in the head. The scientist dies. But she reanimates as a zombie within 20 seconds, and then she runs toward a steel door and starts pounding on it in a way that makes clear the zombie is not only a fast zombie but has incredible strength.

In other words, the same French scientists responsible for the zombie outbreak made it worse by trying to find a cure. They created a new variant where zombies do not die if they are shot in the head; they reanimate quickly; they are fast zombies; and they have superhuman strength. So, basically, it’s Z Nation.

What this has to do with the Rick Grimes movie is not clear, but it certainly seems to be setting up something and, if not a Rick Grimes movie then perhaps a European spin-off. But whatever it is, it’s clear that Scott Gimple — the architect of The Walking Dead universe — added the post-credits scene in the hopes that The Walking Dead fanbase would not lose their sh*t if we hadn’t been given anything for our efforts. As it is, you can completely skip both seasons of The World Beyond and simply watch the after-credits sequence, which is already on YouTube.


← Review: Jane Campion Probes at the Limits of Hate and Love in 'The Power of the Dog' | Is Sylvester Stallone a QAnon Believer? Sure Looks Like It →