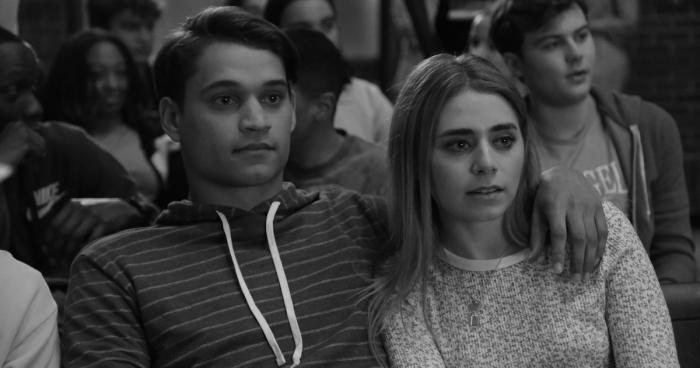 Previously on Atlanta: Paper Boi and Darius decide to get high on hallucinogens and walk around Amsterdam together.

THE STORY SO FAR: A biracial high-school student named Aaron, who has spent most of his life passing for white, is trying to figure out how to afford tuition for college. Aaron and the rest of the graduating senior class attend an assembly where a Black multi-millionaire announces that in order to give back to the community, he is personally going to pay for the tuition of every graduating senior who is going to college…but only if they’re Black.

WHAT’S GOOD ABOUT THIS EPISODE?: Aaron playing a first-person shooter video game with two other Black male players and quickly showing viewers how racist and misogynistic and downright hostile that multiplayer sessions can get when players have distance and anonymity on their side. Aaron and his father conversing with each other about his father’s refusal to fill out any applications for financial aid or take out any loans, as well as Aaron’s naïveté about how police treat Black people. The jersey for the 2016 Logan Paul Comedy Tour that is hanging on Aaron’s wall. Aaron sitting with his friends and his girlfriend as they vent about Black students getting their tuition paid for when they already get to go to school for free, and how loud they’re all being as they celebrate the scholarship announcement. The audition process that Robert puts all of the Black students through, and the long line of non-Black students preparing themselves to look and act as Black as possible in order to win, from singing Shai’s “If I Ever Fall In Love,” to braiding their hair and putting waves in it, to even reenacting the cover of OutKast’s classic album, Stankonia.

The actual audition process, in which Aaron is questioned on nearly everything about Black culture that Black people should know (including the price of Arizona Iced Tea), which Aaron fails miserably, and is even compared to Clarence Thomas before he is told to leave. Aaron deciding to lash out by constructing a flamethrower in his garage and burning the entire school down, which is the same idea that is carried out by a Nigerian-American student named Felix, and after much sh-t-talking between the two of them, Aaron and Felix are both trying to kill each other with their flamethrowers, deathmatch-style. Felix getting shot by the police, and receiving a scholarship check as a result before he is taken to the (good and white) hospital, while Aaron is arrested and sent to jail. Aaron being paroled a year later and working in an electronics store, and who is now in full Chet Hanks/Jesse Williams/Chris Jamal Evans mode. The final shot of the episode, when Aaron is reunited with his ex-girlfriend, and turns the charm all the way up to 11, before breaking the fourth wall and looking at the camera like Michael Jackson in the video for “Thriller.”

HOW MANY F-BOMBS WERE THERE IN THIS EPISODE?: A couple, due to Greg (played by legendary comedian George Wallace) losing his temper with Aaron at the end of his audition, and Aaron losing his own temper when he’s told that he won’t qualify for the scholarship.

ANY CAMEOS FROM THE CAST OF SOLO: A STAR WARS STORY?: None.

ON A SCALE OF 1 TO “WHAT THE HELL DID I JUST WATCH?” HOW WEIRD AND TERRIFYING WAS THIS EPISODE?: Five, as I definitely wasn’t expecting this episode of Atlanta (or any episode) to end with dueling flamethrowers, or to have Kevin Samuels show up in a guest role.

THE KEVIN SAMUELS WHO JUST DIED EARLIER THIS MONTH, AND WHO HAS HAD BLACK TWITTER BUTTING HEADS WITH EACH OTHER EVEN MORE THAN USUAL?: Yes, indeed.

WAIT, WHO IS HE IN THIS EPISODE?: He plays Robert “Shea” Lee, the Black multi-millionaire whose scholarship announcement on behalf of Black students is what sets this all in motion.

OH, WOW! JUST…HUH! DON’T YOU FIND IT IRONIC THAT KEVIN SAMUELS JUST DIED, AND THEN HE JUST SHOWS UP ON AN EPISODE OF ATLANTA A FEW DAYS LATER?: I sure do. The ironing is delicious.

I KNOW THAT BLACK TWITTER IS DIVIDED BETWEEN THOSE WHO DON’T CARE THAT KEVIN SAMUELS IS DEAD, AND THOSE WHO ARE ANGRY AT THE SUPPOSED LACK OF SENSITIVITY REGARDING HIS DEATH. SO WHAT DO YOU HAVE TO SAY ABOUT THIS?: I wasn’t all that familiar with Kevin Samuels, or what made him so notorious with Black Twitter. But after everything I’ve read and learned about him, and his willingness to demean and talk sh-t about Black women to boost his own reputation and fatten his own pockets, all I have to say about him and the fact that he’s now dead is …

That about covers it. If that makes you unhappy or upset with me, go ahead and share your thoughts in the comments. You wouldn’t be the first to curse out my very existence, and I guarantee you won’t be the last.

ANY TIME-TRAVELING ALIENS IN THIS EPISODE?: Yes.

WAIT, REALLY?: No, Dustin, there ain’t no aliens in this episode! Go eat a bowl of Raisin Bran and stop asking me this question.

TO SUM IT ALL UP: If there was ever any doubt that this season of Atlanta will be the most controversial and divisive one yet, those doubts were pretty much silenced with this past episode. In the last recap that I wrote, I joked about how Rachel Dolezal could possibly show up before the season ends, and considering the lineup of guest stars who have shown up so far, it seems like less of a joke and more of a possibility. From Chet Hanks to white Liam Neeson to Kevin Samuels, Atlanta has been making a lot of viewers question just what the hell Donald Glover was thinking with his casting process, and what exactly was he trying to show or accomplish. In the case of Kevin Samuels, there was nothing about his character that seemed like a commentary on all of the questionable advice he would give via his YouTube videos, which only made those same viewers think that Glover was once again showing his disrespect of Black women by allowing Samuels to just show up and play his regular-regular role like he was a regular-regular guest star. Or perhaps the fact that he plays someone who gets to judge other people on their Blackness and decide whether they deserve to succeed and flourish in life is the commentary that he wanted to make. Whether Glover’s aim was at Samuels, or at Black Twitter for their many comments and discussions about Blackness, about whether some Black celebrities are meeting their criteria, and how those very same comments and discussions end up becoming very colorist very quickly? That’s for the viewers to decide and discuss and write think pieces about, as they do about every other episode of Atlanta.

All that being said, this episode (which was written and directed by Donald Glover) was another memorable one, even if it does make very little sense that Felix would get a scholarship check after getting shot, when it would be more likely that he’d go to jail instead of going to college, just like Aaron. And I was also hoping that we would get more focus on Robert “Shea” Lee changing the name of the school from Stonewall Jackson High School and naming it after himself, but that unfortunately didn’t happen here. (Which can both be filed under the “WHAT’S NOT SO GOOD ABOUT THIS EPISODE?” section of this recap)

Only one episode left this season, which is the season finale, and which looks like it will be focused on Vanessa, who has been off doing her own thing, and scaring the sh-t out of Earn as a result. Hopefully, she will get more screen time that will fill in the blanks on how she’s been feeling and what she’s been up to.

This episode of Atlanta has been brought to you by “Brown Skin” by India.Arie:


And by “Hanging On A String” by Loose Ends:


← The Selena Gomez Hosted 'SNL' Features Steve Martin, Plus the Worst Cold Open of the Year | Wait, This Is Millie Bobby Brown?! →