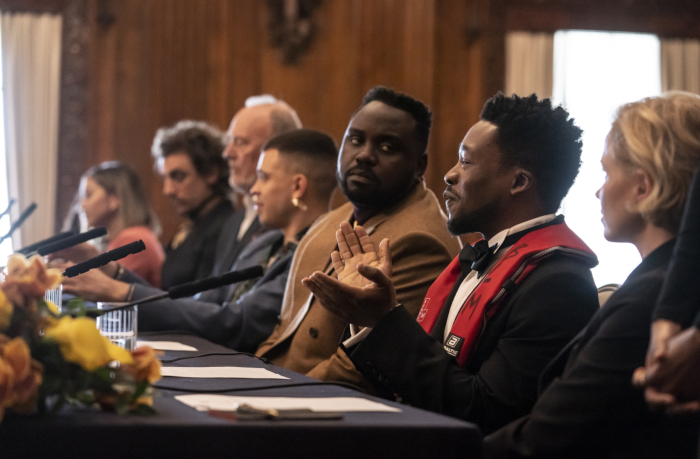 'Atlanta' Recap: 'White Fashion,' The Episode That Promises Racism Will Be Over By 2024

Previously on Atlanta: Earn, Paper Boi, Darius, and Socks (which is not spelled S-O-X, and who has somehow become a member of Paper Boi’s entourage) find themselves on the hunt for Paper Boi’s cell phone, which goes missing after one of Paper Boi’s performances, and which leads them to confront an obsessive hardcore fan of Paper Boi’s named Wiley.

THE STORY SO FAR: After the newest clothing line from a white-run fashion company results in massive backlash from the African-American community, Paper Boi is approached about taking part in a press conference in order to help them look good and get their groove back. Darius accompanies Sharon, the white and female head of hospitality, to a Nigerian restaurant called Eko Chops due to his hunger for some jollof rice. After weeks of separation, Earn is reunited with Van, who has apparently been exploring Europe and going shopping while doing so.

WHAT’S GOOD ABOUT THIS EPISODE?: “Get this girl a cigarette, she’s freezing. Come on!” The shot revealing what Marcello’s Central Park-inspired clothing line actually looks like, and the fact that it actually has “Central Park 5” printed on the clothing. Earn and Paper Boi’s brief reference to the rumors about Tommy Hilfiger being racist towards Black people, followed by Paper Boi’s comment that Marcello looks like Drop Dead Fred. Darius’ description of jollof rice: “It’s as if your taste buds are being scammed by a Nigerian prince at a Burna concert.” Paper Boi finding out that he won’t be paid for this, and immediately letting Marcello know what it will cost for him to play along and do what’s being asked of him. Earn: “You’re not worried about what the streets will think about you doing this?” Paper Boi: “Man, f-ck the streets, man! I’ve shot niggas!” The two of them conversing about whether or not Earn would or wouldn’t take advantage of a situation like this, and then reminding themselves of what white people do to Black people who do everything possible to change the game by uplifting their community (“They kill them.”) Darius: “Who told you that [jollof rice was Ghanaian]? Was it a Ghanaian?” Khalil (a.k.a. the Atlanta version of DeRay Mckesson, who actually got mad at War of the Planet of the Apes because he thought that one of the apes was based on him due to his tendency to wear a vest, when he really wasn’t based on DeRay at all) introducing himself to Paper Boi: “So is this your first time apologizing for white people? It’s the best, the dinners [at these press conferences] are amazing. I haven’t paid for a meal in 73 police shootings.”

The French reporter asking if racism will be over after the apology at the press conference, and the responses that follow from both Paper Boi and Khalil. The look on Paper Boi’s face and his increasing exasperation when he hears the social justice activists/influencers he’s sitting down with explain what they want to do in terms of helping other Black people. (“I wish for ten tickets to A Raisin In The Sun for my charity, and Julia Roberts better be in it, not an understudy like last time. Oh, and tickets to the Black Panther 2 premiere.”) Paper Boi confronting DeMarco (a.k.a. the Atlanta version of Shaun King, who really, really, really should not be trusted with your money, your attention, and definitely not your money, and a lot of you really should be listening to the Black women who have spent years telling you this sh-t) as to whether he is even Black, and every other Black person at the table turning into this meme right here. (“Yeah, it don’t sound right. It don’t sound right when he says it. Does he say ‘nigga’ a lot?”) Earn convincing the concierge that he and Van deserve a free hotel room after being harassed and racially profiled by an angry white woman in their lobby. (Van: “Are you staying here?” Earn: “I am now.”) The growing anger and disappointment on Darius’ face when he realizes that Eko Chops has been closed down, and that Sharon is responsible for making that happen so that she and her husband could operate their own Nigerian food truck called Naija Bowl, where they make jollof rice with raisins, and cheesy jollof rice, and is card-only when accepting payment. Paper Boi being pissed the f-ck off when he realizes that Marcello and company took all of his ideas and simply “All Lives Matter-ed that sh-t” by taking the Reinvest In Your Hood campaign, and turning it into the complete opposite of what Paper Boi wanted.

ANY CAMEOS FROM THE CAST OF COMMUNITY?: One would think that Chevy Chase could’ve and should’ve appeared in this episode about white people who think they’re doing great things in the name of business when in reality, they’re indulging in problematic behavior towards Black people that does far more harm than good, but no. There are no Community cast members to be found here.

HOW MANY F-BOMBS WERE THERE IN THIS EPISODE?: Several, and of course, most of them are courtesy of Paper Boi, who isn’t happy at all when he sees what the Reinvest In Your Hood campaign looks like, and especially not when he’s told by Khalil that the American Red Cross is also involved and doing their part to help Black people in need. (“Nigga, I know what the f-ck the Red Cross is! They’re the worst one! Them niggas ain’t never gonna see that f-cking money now!”)

ANY CAMEOS FROM THE CAST OF SOLO: A STAR WARS STORY?: No. Still no cameo appearances by Phoebe Waller-Bridge, which really shouldn’t be expected anyway, despite Glover’s insistence that the two of them are still friends.

ON A SCALE OF 1 TO “WHAT THE HELL DID I JUST WATCH?” HOW WEIRD AND TERRIFYING WAS THIS EPISODE?: This episode of Atlanta isn’t nearly as weird or terrifying as previous episodes, but Darius’ storyline can and probably will make you want to flip several tables when you see how it ends.

ANY TIME-TRAVELING ALIENS IN THIS EPISODE?: I really do look forward to NBC airing another cheesy sci-fi show for Dustin to watch and recap, so he’ll stop asking this question. Because no, there are no aliens in this episode.

WHERE’S VANESSA DURING THIS EPISODE?: When Earn has finished meeting up with a friend in a hotel, and then asks the concierge where he can find the nearest Apple Store, he sees Van walk in with shopping bags in hand, and who is still doing her thing without (seemingly) a care in the world. Earn then confronts her for being missing for weeks and not telling him or anyone else where she’s been all this time. But in the middle of their conversation, Van is loudly confronted by an angry white woman who accuses Van of stealing a wig from a nearby department store, and tries to physically restrain her, Miya Ponsetto-style, in order to make a citizen’s arrest. Instead, she’s ordered to leave by the concierge, and offers both Earn and Van a room for them to stay in, free of charge.

DIDN’T VAN TELL DARIUS EARLIER THIS SEASON THAT SHE ALREADY HAS A BOYFRIEND?: Yes, she did say that.

AND YET……?: And yet, it didn’t stop her from hooking up with Earn (who worries about everything, according to her), and then being gone once again by the time he wakes up in the morning.

TO SUM IT ALL UP: There have been some complaints on social media from viewers who feel that this season of Atlanta is focusing too much on white people, and that it needs to wrap up this “Earn and friends handling their business in Europe” storyline and go back to actually taking place in Atlanta. This is understandable, and sounds very much like the complaints that were made about the second season of The Wire and how the show started by focusing on a largely Black cast of characters, only to end up focusing on a whole bunch of white people and becoming worse as a result. (Of course, whenever I’m reminded that those complaints about Season 2 of The Wire still exist, I turn into Maddie from Euphoria and can only respond with “Bitch, you better be joking!”) And considering that this season of Atlanta so far has been just as funny and incisive as ever, my response is the same to any naysayers about this series as well. “White Fashion” did an even better job of hammering home some of the themes its earlier episodes have tackled so far: White allies who only make things worse with their performative activism and who usually don’t notice or care when they do, white people making unfortunate and easily avoidable mistakes when they are the only ones in the room where it happens and the only ones making the decisions, and Black people being reminded that 1) All skinfolk ain’t kinfolk, 2) Sometimes you have to be as just as sneaky and manipulative as white people when it comes to getting what you need/want/deserve (and which all goes back to Paper Boi’s “Niggas do not give a f-ck about us” speech to Earn at the end of Season 2), and 3) Black people gatekeeping the things and customs and places that we hold near and dear to us (in other words, telling anyone who isn’t Black to stay the f-ck out of Black people’s business) is becoming more and more of a necessity. Because white people can and will take those things for themselves under the belief that they deserve those things and they can do them just as well as Black people can, if not better. And also because gentrification is a hell of a drug. I’m both excited and terrified to find out what Atlanta will do next to continue dealing with these themes, and how many more fans they’ll probably piss off as a result.

This episode of Atlanta has been brought to you by “The Space Program” by A Tribe Called Quest:

“New York, I Love You, But You’re Bringing Me Down” by LCD Soundsystem:

And by “In Your Eyes” by BADBADNOTGOOD, featuring Charlotte Day Wilson: