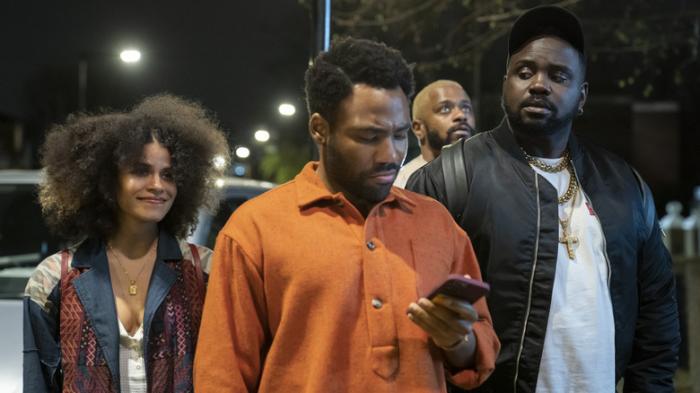 'Atlanta' Recap, 'The Old Man And The Tree'

Previously on Atlanta: Earn caught a flight to Amsterdam where Paper Boi would be performing, except for the fact that he was in jail for some unknown reason. Darius and Vanessa went shopping together in a thrift store, which sends them both down a very unusual rabbit hole that ended with the two of them seeing a dying man euthanized by being brutally smothered while lying in his own bed.

THE STORY SO FAR: Earn, Paper Boi, Van, and Darius attend a party that is being held at the home of a reclusive billionaire named Fernando. Paper Boi soon ends up playing poker with Fernando and is not happy with how their game ends. An awkward conversation between Darius and an Asian woman named MK that he meets at the party results in a white partygoer names Socks (which is not spelled like S-O-X) eager to prove that he is an ally and that he does not tolerate racism of any kind. Earn is approached by a young painter/influencer named T.J. to become his manager and help invest in his ideas and his artwork despite the fact that his artwork isn’t particularly good. Van is just eager to enjoy her vacation, even if her behavior causes Earn to worry about her.

WHAT’S GOOD ABOUT THIS EPISODE?: Earn jokingly showing everyone what his White Voice sounds like, only to have Paper Boi and Darius tease him by saying that’s just his regular voice. (Sadly, when Darius uses his White Voice, he doesn’t sound anything like David Cross). Darius: “Good sirs, I’m gonna go get a drink and also find the bathroom you don’t want nobody to use.” The look on Paper Boi’s face when he realizes that Fernando was being literal when he asked if he likes trees. Darius responding to Socks’ hat hair, which gives off some Walton Goggins vibes: “Your hairline is intense, man.” Darius attempting to catch a piece of food in his mouth, which he immediately starts choking on once he catches it. Earn noticing T.J. getting closer and closer to him in the hallway as he’s approached by Will to invest in T.J.’s idea. Fernando’s story about how he ended up having sex with a Black male ghost (yes, you read that correctly), and how his exit from the poker game when he loses to Paper Boi results in everyone else immediately getting up to leave as if Fernando just lost a basketball game at the playground and is coming back with a gun to bust a cap in everyone’s asses. Socks turning Darius’ conversation with MK into a game of telephone with every other white person at the party who is eager to prove their allyship, to the point where someone believes that MK actually said “All lives matter” to Darius, and this night overall not turning out well for MK. Paper Boi somehow getting his hands on a chainsaw and using it to cut down the ancient tree at Fernando’s house that he holds dear before snatching everything he can get his hands on (which is mostly food from the Nando’s restaurant built in his home) and running out of there to escape (and to laugh his ass off with Earn and Darius) in a taxi … which is being driven by Socks. (A much more different ending for Paper Boi, compared to what happened the last time he confronted someone who owed him a large sum of money)

ANY CAMEOS FROM THE CAST OF COMMUNITY?: None whatsoever.

HOW MANY F-BOMBS WERE THERE IN THIS EPISODE?: Several, due to Paper Boi being very impressed with how the outside of Fernando’s house looks like a run-down flat, but the actual inside of the house looks like it belongs on MTV Cribs.

ON A SCALE OF 1 TO “WHAT THE HELL DID I JUST WATCH?” HOW WEIRD AND TERRIFYING WAS THIS EPISODE?: This episode wasn’t terrifying, but not surprisingly because this is Atlanta, it was pretty weird. Van goes from stealing random knick-knacks in Fernando’s house to pushing other partygoers into the pool for her own amusement. All of that, combined with her disappearing from the party to eat at a diner and ignore Earn’s phone call when he reaches out to her, is reminding me of Gretchen’s storyline from Season 2 of You’re The Worst, in which it was slowly revealed that she is living with depression. Whether Van will be shown experiencing something similar to that is still a mystery for now, but considering her recent mention of her panic attacks, as well as Earn pointing out that her mother is concerned about her, the likelihood of that does appear to be strong.

ANY TIME-TRAVELING ALIENS IN THIS EPISODE?: To Dustin’s ongoing disappointment, no.

TO SUM IT ALL UP: Another great episode of Atlanta this season, which does a terrific job of highlighting how white people can end up doing more harm than good with performative allyship that’s largely fueled by White Guilt, as well as the fact that partying with the rich and powerful will always end up being and feeling strange and unusual, no matter what happens or where it happens. (If you saw Eyes Wide Shut or if you’ve ever been to any party with white people where there is immediate access to cocaine, which is not cheap, you already know this to be true.) After seeing what appears to be a slave (or a random Black man who most likely experiencing all of the nonexistent pleasantries that come with being Black in the early twentieth century) in the background of a photo that shows Fernando’s ancestors, Earn listens to Paper Boi’s advice and agrees to help T.J. with his business since Black people scamming and doing what they have to in order to survive and flourish is a necessary evil.

I can easily think of a few Black folk who lost a lot of money on Universal FanCon that would strongly disagree with this, but that’s a whole other story. If you’re on Twitter, keep an eye out for some of those same Black people to remind you later this month that the organizers of Universal FanCom are some scammers who still owe them money. Unfortunately, using chainsaws to destroy the property of said organizers isn’t really an option.

And by these two commercials for Nando’s, a fast-food chain I was not at all aware of or familiar with until this very episode.