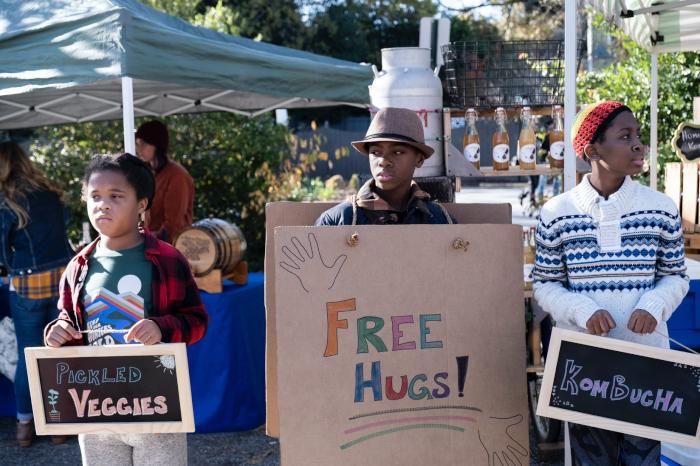 Previously on Atlanta (and these previous events happened back in 2018): Tension between Earn and Paper Boi continues to grow, as the two of them search for an entertainment lawyer to represent Paper Boi while also preparing to go on an international tour with Clark County. Earn is also forced to deal with the growing possibility that Paper Boi will fire him and hire another manager, most likely Clark County’s manager, Lucas. When the opportunity presents itself for Earn to show how loyal he is to Paper Boi, and that he’ll do whatever he needs to protect him while also protecting himself, their bond with one another only became stronger.

THE STORY SO FAR: A young Black boy named Loquareeous Reid is removed from the custody of his mother and grandfather from Family and Children’s Services (and by “removed,” I really mean “kicked out of the house by his mother because she thinks he called the cops on her”), and is sent to live with two white women named Amber and Gayle (who come off like evil versions of Alexis and Stevie from Schitt’s Creek), and their family of adopted Black children named Lanre, Yves, and Fatima. His time spent living with this family becomes very unpleasant very quickly.

WHAT’S GOOD ABOUT THIS EPISODE?: The opening scene in which a Black man and a white man are fishing together on what appears to be Lake Lanier, and the white man explains that the reason why his friend feels like the lake is haunted is that the lake is sitting on top of a town that was largely self-governed by Black people before it was flooded, and all of the town’s residents were killed. (Which then ends very similarly to the opening scene from Twilight Zone: The Movie). Loquareeous being forced to dance in the school hallway by his mother and grandfather after they are both called down to speak to the principal and guidance counselor. The looks exchanged between Lanre, Yves, and Fatima (which probably aren’t even their real names, considering that Amber and Gayle choose to refer to Loquareeous as “Larry” instead) when Loquareeous asks Amber where the washcloth is to go with his towel, followed by Amber immediately changing the topic because …washcloths really don’t seem to be a thing in many white households for some reason. (Along with not showering regularly, or not washing their legs when they do shower, and actually feeling the need to tell the whole world about it on social media.)

The fact that Amber and Gayle are both nose-blind to the fact that their house stinks thanks to the smell of kombucha and pickled brussels sprouts. Loquareerous attempting to escape from Amber and Gayle by running to the nearest police officer, only to have him do nothing except boast about nearly shooting him and then telling him how much he looks like R&B singer Aloe Blacc thanks to his hat. Gayle repeatedly finding ways to imply that Loquareeous isn’t appreciative enough of his Blackness, by referring to him as a snitch, by telling him about all of the starving children in Africa (which white people love to talk about almost as much as they do about all of the “Black-on-Black crime in Chicago”), and by telling him to shake his booty more when helping them sell their merchandise at the farmer’s market. The random white man’s response to the “Free Hugs” sign that Loquareeous is forced to wear: “Awww, is Hugs your father?” The other FCS caseworker shows up for a welfare check on Loquareeous and the other children, except that this caseworker is a Black woman who is not accompanied by any police officers for support, unlike the previous FCS caseworker who was confronted by Ms. Reid, which is what results in this caseworker being killed offscreen by Gayle, and Loquareeous seeing her clipboard in the pile of garbage bags outside the house before the family leaves for a trip to the Grand Canyon. The looks exchanged between Loquareerous and the other three kids that make up an entire conversation between them all: “I think these white women are about to kill us.” “Yeah, nigga, we know!” “Sweet release.” “My hair hurts.”) Loquareeous outwitting Amber and Gayle and jumping out of the van before they complete their suicide pact and their van crashes into the waters of the lake where this episode first started. (Though to be honest, I thought for a brief second that Loquareeous was going to yell “Wild card, bitches!” before jumping out, but I’m glad he didn’t. The final scene between Loquareeous and his mother, when he returns home and she lets him know (without offering an apology or asking for an explanation regarding everything that happened to him) that spaghetti is in the refrigerator for him to eat while he watches cartoons.

WHAT’S NOT SO GOOD ABOUT THIS EPISODE?: The only bad thing about this episode is seeing how Amber and Gayle “cook” fried chicken, which is taking raw chicken, drenching it in flour, and then microwaving it for eight to twelve minutes. That, and the fact that these kids were expected to eat it, disturbed me far more than anything I watched in Jackass Forever, or when Teddy Perkins prepared that ostrich egg so that he could eat it, and made me want to vomit like a damn Crank Yankers puppet.

HOW MANY F-BOMBS WERE THERE IN THIS EPISODE?: One, when Ms. Reid tells the Family and Children’s Services caseworker, “You got me f—ked up!” when she arrives to do a welfare check on Loquareeous. And when a Black person says that to you, especially an older Black woman, you should prepare yourself to be cursed out, or knocked out, or maybe even both.

ANY TIME-TRAVELING ALIENS IN THIS EPISODE?: (sighs) No, Dustin. I know you really miss watching Manifest and La Brea, but there are still no time-traveling aliens anywhere to be found here.

TO SUM IT ALL UP: It has been four years since Atlanta has aired on FX with new episodes, and there’s something quite impressive about the fact that the show’s very first episode upon its return doesn’t really feature any of the regular cast members, and instead focuses on a random child who is kicked out of his home and forced to live with another family. Much like the “Teddy Perkins” episode that aired last season, “Three Slaps” is far more terrifying and unnerving to watch than anything that Ryan Murphy and his writers could ever conjure up for American Horror Story. It touches upon the tragic history of Lake Lanier, and the very strong possibility that it’s cursed, due to the large number of deaths that have occurred there over the last several years, as well as the murder/suicide of the Hart family (and how one of the children, Devonte Hart, appears in a viral photo in which he tearfully hugged a police officer before his death). Like the series premiere of HBO’s Watchmen did regarding the Tulsa massacre, it opened the eyes of several viewers to historical events about African-Americans that they weren’t entirely familiar with and knew very little about. (If any of this had been taught in school, it would most likely be considered Critical Race Theory, and would result in somebody getting fired for attempting to make white students feel sad).

As darkly funny as it is to see Amber and Gayle fail so miserably when it comes to making something as simple as fried chicken, it’s actually an example of food-gentrification by white people, and how they insist on finding ways to make ethnic cuisines that tastes worse in comparison to the original recipes, and looks like the Struggle Plates we see all over Twitter around Thanksgiving. All of this only highlights how utterly disturbing their actions are towards the children they’re supposed to be raising. They both insist on referring to Loquareeous as “Larry” because they think it’s cute, and mostly because they’d rather not learn how to spell and pronounce his name. (Much like how several white reporters in entertainment news treated Quvenzhané Wallis in regards to her name, and even tried to refer to her as “Little Q” or as “Annie” because referring to her by the name of her character from Annie is so much easier than researching and asking questions on correct pronunciation.) None of them are given decent food to eat, which results in their declining health and sickly appearance, and they’re all forced to work outside in Amber and Gayle’s garden. There is one moment when Amber tells Loquareeous that he should sing a song while he’s working, and instead of letting him sing YoungBoy Never Broke Again’s “Make No Sense,” she instead tells him that he should sing Porter’s “Don’t Wanna Work No More,” and then laughs at her own joke before Gayle joins in and laughs as well. That particular moment is both chilling and infuriating the more I think back on it. When they’re both confronted with the reality that their white savior complex won’t be enough to keep their family afloat, they decide that killing their children in a murder/suicide rather than having them placed back in foster care to be with other families who might possibly treat them all better is a more appealing option to them, as Amber and Gayle truly believe that the children’s lives will be miserable without them and their guidance. It only makes you breathe a sigh of relief when “Three Slaps” ends with only Fake-Ass Thelma and Louise (and their dog, Cornpop, who spent the entire episode eating better food than any of the children do) losing their lives, and not Loquareeous or any of the other children.

This was a fantastic episode, which proved that Atlanta hasn’t missed a step since its return. It has only increased my anticipation in seeing how the rest of the season is going to go, while also wondering just how amused and terrified I’m going to be while watching each episode.

And by this cover performance of Queen’s “Somebody To Love” by Foo Fighters drummer Taylor Hawkins, who died this past Friday at the age of 50.

May he rest in peace.