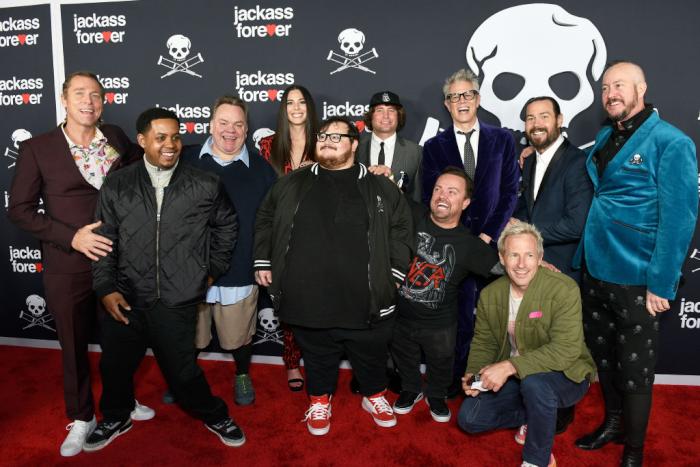 'Jackass Forever' Review: Bless This Art, For It Will Live In Perpetuity

Regular readers may be aware that I consider myself a bit of a connoisseur of ‘lowbrow’ comedy. I’ve lost track of the amount of times I’ve written a variation on the sentiment: ‘I love ‘sophisticated’ and ‘clever’ humour as much as the next guy, but if you really want to bust my gut, show me a person falling over.’ I’ve been saying that since I started here over half a decade ago, and, if anything, as time has gone on and the world has spiraled further into disaster, I’ve only learned to appreciate the art of physical pain and real-life slapstick more and more.

And ‘art’ really is the correct choice of terminology here. The French philosopher Michel de Montaigne once famously said: ‘On the highest throne in the world, we still sit only on our own bottom.’ He was reminding us that no matter what our occasional pretensions or aspirations to some higher state or purpose, humanity remains a creation of earthy matter. We might be capable of great feats of conceptual flight and philosophical fancy, but we would do well to remember the fleshy and humble physical form that binds us to this world. With Jackass, this is exactly the thesis that Johnny Knoxville and his merry band have been expounding on for two decades, and Jackass Forever—the latest film entry from the lads, directed as always by Jeff Tremaine—is the swansong of a group of artists that have used the medium that is their collective pain to remind us over and over again of our provenance. Their bodies—and the very earthy matter therein—have been a glorious, battered canvas.

Arriving over a decade after the previous entry in the series, the fantastic Jackass 3D, there is a powerful sense of nostalgia and bittersweet acknowledgment of the passage of time that permeates Jackass Forever. This would be apparent in any film featuring people we have come to know and love over twenty years, but it’s made all the more powerful by the knowledge and the evidence of all that they have done over those years. Obviously, this doesn’t overwhelm the gleeful anarchy and gross-out bodily humour on display throughout—this is still a Jackass film after all—but the notion of the body’s impermanence has been inherent to Jackass since the moment Johnny Knoxville first took a taser to the chest at the turn of the new millennium. In pursuing their craft to the edges of mortality, this carnival of personable, manic jesters has held up a mirror to our own fragile existence. Jackass Forever may well be the final entry in this singular series centred around a group of colourful personalities subjecting themselves to outlandish pratfalls and gruesome injuries for our edification. It probably should be. I don’t want it to be, but it probably should be. All around fifty years old now, and suffering the accumulated bodily trauma that their work has wrought upon them, Knoxville and Co. have more than earned the right to not push their luck any further. Nevertheless, it will be incredibly sad to see them go.

Lest it sound like I’m trying to over-intellectualise things, let’s take a step back. Jackass Forever follows the same basic template as all the other films have. This is still a collection of skits—some only a few seconds in length—that heavily features dudes getting smashed in the nuts. There is nothing groundbreaking here for the series (apart from that sense of finality), and there doesn’t need to be. If you have enjoyed the Jackass formula before, you will have an absolute blast here. The cinema I saw it in shook with laughter and convulsed with empathetic recoil over and over. The crew shakes things up a little bit by featuring a few new faces that prove as game as the old guard, and the mix of old and new is judged adeptly, but the feeling of warmth we experience at seeing Knoxville back together again with Steve-O, Chris Pontius, Wee Man, Dave England, Danger Ehren, and Preston Lacy is the most potent part of the Jackass Forever experience. We have been watching these boys (and their genitals) for over twenty years, and while their pain and daring might be the hook, it is their camaraderie and love that provide the bedrock upon which this is all built—and which gives this entry such a strong emotional resonance. The promotional material for Jackass Forever leaned heavily on this feeling. The trailer for the film opened with the line ‘When was the last time you got together with old friends to laugh your assess off?’ combined with old black and white footage of a youthful Jackass crew, before cutting to a visibly grey and wrinkled ensemble shot of our heroes. The guys know this is strong stuff, and that they have earned our investment. I’m not gonna say there are parallels here with Richard Linklater’s sublime Before Trilogy—but, you know, I’m also not not gonna say that.

And, look, this stuff certainly won’t be for everyone. Jackass Forever is 1 hour and 44 minutes of dicks and tasers and cackling and people screaming in pain. But for a potent illustration of the virtues of Jackass as a whole, look no further than the legions of YouTube ‘prank’ shows that have followed in its wake. Typified by the execrable Paul brothers, these cheap and vacuous videos adopt many of the surface trappings of Jackass without understanding what actually makes it great. Narcissistic displays in which their creators always come out on top, often at the expense of suffering third parties, they thrive on nonconsensual cruelty and are bereft of imagination. The contrast with Jackass couldn’t be starker. Johnny Knoxville and Co.’s project abounds with endless creativity and is centred around ego-destruction—the joke, and the pain, is always on the boys themselves rather than innocent bystanders. That’s not to say that there haven’t been some questionable moments throughout the series’ multi-decade history, but by and large, the space it has occupied has been a warm and loving one—as well as a subversively progressive one, with its anarchic ongoing fusillade against homophobia just one of its merits.

The interviewer tip toeing up to the line of "is it possible that Jackass is at least a smidge gay?" and Knoxville's response is my favorite interaction that's ever happened as part of a press tour pic.twitter.com/BSuOXZbwU8

Measuring Jackass Forever against its predecessors is a tricky proposition. There might be nothing as visceral as, for example, Steve-O’s masterpiece from Jackass 3D, ‘The Poo Cocktail Supreme’, but that’s trying to measure up to a very high bar indeed. What matters is that the rhythm of longer segments and shorter skits here is as on point as ever, the creativity is at gonzo levels that a younger Jackass crew would be proud of, and Danger Ehren and every single facial expression he ever makes remains a secret weapon powerful enough to knock me off my seat repeatedly. So measuring Jackass Forever against other Jackass films isn’t easy. Measuring it against everyone else who has tried to do what they have done, and who probably ever will try, is much simpler: There is no competition here. In craft and in message, in execution and in personality, the Jackass boys (and it has exclusively been boys up until this entry, but that’s a discussion for another time) stand alone.

Because of the Covid-19 pandemic, I haven’t been to the cinema very much at all over the past few years. When I have gone, I have had a powerful experience each time. I’ve seen Portrait Of A Lady On Fire, Sound of Metal, and Annette. I’ve no qualms at all about putting Jackass Forever alongside those when it comes to appreciating the power of the cinematic experience.

Plus, this one has Steve-O in a bathtub farting an explosion so strong it sends him flying backward and shatters the bathtub. Bless him, and all the boys. I for one would like to thank them for everything.

← James Gunn Disputes Steven Soderbergh's Characterization of Superhero Movies (Sort of) | 5 Shows After Dark: 'How I Met Your Father' on Hulu, 'Olympic Winter Games' on NBC →