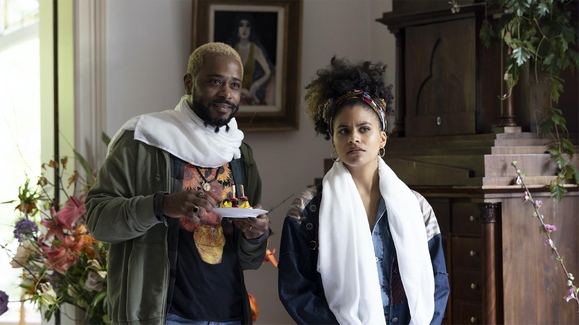 Previously on Atlanta: A young Black boy named Loquareeous Reid is removed from the custody of his mother and grandfather from Family and Children’s Services (and by “removed,” I really mean “kicked out of the house by his mother because she thinks he called the cops on her”), and is sent to live with two white women named Amber and Gayle, and their family of adopted Black children named Lanre, Yves, and Fatima. His time spent living with this family became very unpleasant very quickly.

THE STORY SO FAR: Earn catches a flight to Amsterdam, where Paper Boi will be performing, except for the fact that he is in jail for some unknown reason. Darius and Vanessa go shopping together in a thrift store, which sends them both down a very unusual rabbit hole in terms of where they find themselves before the day is over.

WHAT’S GOOD ABOUT THIS EPISODE?: Earn losing both his belt and his underwear, which an airport security agent discovers when he has to pat Earn down, and Earn’s pants end up falling down around his ankles as a result of him having to raise his hands up. Paper Boi absolutely loving his time spent in jail, mainly because his cell looks and feels like a room in a five-star motel where they bring food and dim the lighting and adjust the thermostat for maximum comfort. Pretty much every line out of Darius’ mouth, from him admitting how incredibly high he is when talking to Earn, to him confessing that he can’t have children due to his balls being crushed when he was a kid in Nigeria, to asking Van if she and Earn are going to have another baby together. (Which Van shuts down by telling him that she already has a boyfriend, and hopefully his name is not named Arthur Fleck) “Pretty sure that’s Tupac Shakur. I felt the thug spirit in my bones on the way up here.” The police officer being very insistent on taking Earn’s used tissue away from him to throw away. Earn showing his confidence as Paper Boi’s manager by demanding $20,000 from Dirk, the venue owner, only to then watch Paper Boi throw half of the money to his crowd of fans waiting for him outside the police station where he was held in jail. The look of confusion on Earn and Paper Boi’s faces when they see a baby in blackface dressed as Zwarte Piet, followed by the look of confusion and irritation on Paper Boi’s face when Earn waves back at the baby. (Seriously, no other actor does looks of confusion and irritation better than Brian Tyree Henry). The scene where we find out just why Paper Boi ended up in jail in the first place. The looks of horror on Darius and Van’s faces when they realize just how the ‘living funeral’ that they’re attending actually ends. Dirk’s failed attempt at putting a beatdown on Earn (who witnesses said beatdown and walks away astonished at how racism is working in his favor), thanks to everyone at the Paper Boi concert wearing blackface.

WHAT’S NOT SO GOOD ABOUT THIS EPISODE?: Seeing so many people in Amsterdam wearing blackface briefly reminded me of how white people are way too f-cking fond of ruining Halloween for everyone else because of how they insist on wearing it as part of their costumes. Beyond that, I have no complaints about the episode.

ANY CAMEOS FROM THE CAST OF COMMUNITY?: No. But considering that so many people in this episode are wearing blackface, and Chevy Chase has quite the reputation for being a planet-sized dickhead to others, I almost expected to see him show up for a moment.

ANY TIME-TRAVELING ALIENS IN THIS EPISODE?: No.

TO SUM IT ALL UP: This is much, much, much less intense and terrifying in comparison to “Three Slaps,” but it’s still as well-written and wonderfully directed, which is to be expected from watching any episode of Atlanta. Being reunited with the main cast and seeing what each character is up to is an absolute delight (even if Darius and Van’s storyline felt like something out of Midsommar), and despite the fact that most of this season will not be taking place in Atlanta and instead be set in Europe, none of that changes how high my expectations are, and seeing Paper Boi enjoying his fame, Earn having to do his part to keep Paper Boi’s career a successful one, Van trying to figure out what her next move will be and if her time in Europe will help at all with her panic attacks, and Darius … being himself and doing his own thing as only he can.

As for the 300 legs of fried chicken that Paper Boi wants Earn to get for him at the end of the episode: I just hope that they’ll look and taste a hell of a lot better than any of the fried chicken coming out of Amber and Gayle’s kitchen.

And “What I Am” by Edie Brickell & New Bohemians.