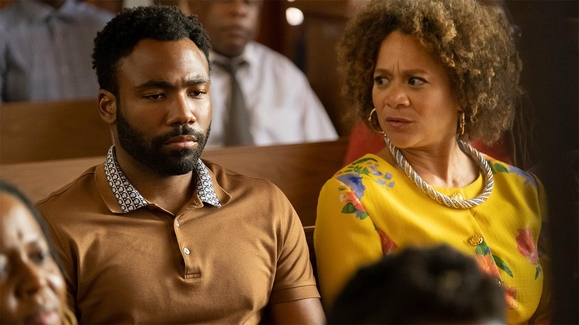 'Atlanta' Recap, 'Light-Skinned-ed:' The Complete Opposite Of Being Easy Like Sunday Morning

Previously on Atlanta: Paper Boi is paid a cool million to spend time with a teenage boy and aspiring rapper, and show him the ropes to how to be successful, only to end up getting some very unexpected career advice. Earn attempts to sign R&B singer D’Angelo as a client, and things end up taking a very weird turn. (Considering this is Atlanta I’m talking about, that’s saying a lot.)

THE STORY SO FAR: What starts out for Earn as a trip to Sunday service at church with his mother (Gloria), his aunt (Jeanie), and his grandfather, ends up as a heated feud between mother and aunt, with Earn (and Paper Boi) caught in the middle. Elsewhere, Earn’s father is spending his Sunday morning walking around the mall before all of the little kids and teenagers show up and is harshly reminded of why he chooses to do this.

WHAT’S GOOD ABOUT THIS EPISODE?: Earn wanting to eat something before church, but Gloria refusing to stop, and Jeanie offering him some cough drops out of her purse. (If I had to guess, the cough drops are Luden’s, and probably cherry-flavored.) That moment of hesitation from Earn when he hears that Gloria and Jeanie are having issues with each other, and though he wants nothing to do with that, he still goes ahead and asks what the problem is. Jeanie then talking about Van is now living in sin due to having a baby with Earn out of wedlock. (If there’s one thing that older Black folk love more than respectability politics, it’s sharing their unwanted opinions about how you look, how often or how little you come to church, and how you live your life.) The look on Earn and Jeanie’s faces when Gloria instantly drives off with her father, and they’re both left standing there and wondering what is happening.

The interpretive dancers in whiteface makeup on stage at church, who reminded me of one of Van’s former students from Season 1. Raleigh refusing to offer any advice to Earn on how to handle this, as he takes his three hours of free time at the mall very seriously. That light movement of Earn’s head when you hear him cursing under his breath as Jeanie catches him trying to sneak out of church, followed by him turning to face her with a smile as if he wasn’t trying at all to sneak out of church. Jeanie: “I wasn’t born yesterday. I watch Criminal Minds, and I know when someone’s up to something twisted.” Raleigh refusing to let any salespeople at the nearby kiosks stop him from enjoying his free time, until he runs into one who convinces him that he looks really good in a hat.

Paper Boi chilling in the studio with fellow rapper Gunna over a game of UNO (whose social media account stays pissing Black Twitter off every time it feels the need to establish what the ‘official’ rules of the game are), which is loudly interrupted by Jeanie storming in after Earn and demanding that everyone clear on out. (I love the moment where Jeanie compliments Gunna’s earrings as he leaves, to which he quietly and respectfully responds, “Thank you, ma’am.”)

Jeanie organizing a phone conference with Gloria, Pearl, and Willy (played by the one and only Katt Williams, appearing on Atlanta for the first time since Season 2) to discuss what is happening. Willy: “You can’t kidnap your own dad. I don’t have time to explain it to you right now, but the word ‘kid’ is in it, so mathematically, it’s impossible.” Jeanie going off on Willy and Pearl for not taking her side, and blames their bitterness towards her on the fact that they hate her because she’s light-skinned and they’re not…which only results in Willy and Pearl laughing at her and calling her out on her bullish-t. (Willy: “Nobody hates you ‘cause you’re light-skinned, Your Majesty.” Pearl: “I hate you ‘cause you’re evil.”) Jeanie then going after Gloria by accusing her of being upset that their father doesn’t remember or recognize her because of his dementia, even though he’s capable of remembering and recognizing the many other children he has around town, which results in Gloria and Pearl ending the conversation and hanging up. (Willy, on the other hand, reminds Jeanie that she still owes him some money, and in half the time it takes to blink, Jeanie hangs up on him.)

Grandpa confirming with the police that he knows that he’s with Gloria and that he recognizes her, before informing them that they’re both in Egypt. (Which Jeanie instantly believes, and even the police look at her as if she has no common sense whatsoever.) Raleigh rocking his newly-purchased hat, and quickly realizing that he has lost track of time, and that he is now in the mall with all of the kids and teenagers running around and making noise now that church has let out. And unfortunately for him, he runs into some teenagers who can’t help but make jokes about his hat, and insist on taking a photo with Raleigh to post on Instagram. Earn and Paper Boi deciding to use the Shmurda Exit to leave the studio and get the hell away from Jeanie, who is on the phone demanding that the police find her father, that they arrest both Earn and Paper Boi, and then demands to speak to a manager when they refuse to do both.

WHAT’S NOT SO GOOD ABOUT THIS EPISODE?: Yet another episode that doesn’t feature Vanessa. Darius isn’t seen in this episode at all, and as much as both characters are missed, it’s also very likely that Zazie Beetz and Lakeith Stanfield are busy with the feature films they’ve been working on has prevented them from appearing as frequently as the audience would like. (Getting into fights with Brad Pitt and raising just as much hell as all of the other assassins onboard a bullet train is pretty damn time-consuming)

ANY CAMEOS FROM THE CAST OF COMMUNITY?: No cameos, but if you want to see the cast of Community that badly, then you probably already know that since we got six seasons, we’re now getting a movie as well. It’s highly unlikely that Chevy Chase will be returning as Pierce because he’s Chevy Chase (and fortunately for us, we’re not), but if Dan Harmon really wants to use the character that badly, he can always recast him with Tig Notaro. If it worked wonderfully for Zack Snyder when he made Army of the Dead, it will work just as well for Dan Harmon making the Community movie)

HOW MANY F-BOMBS WERE THERE IN THIS EPISODE?: Just one, courtesy of a loud and angry driver who does not appreciate Gloria’s driving skills.

ON A SCALE OF 1 TO “WHAT THE HELL DID I JUST WATCH?” HOW WEIRD AND TERRIFYING WAS THIS EPISODE?: 3, to be honest. It was an episode that gets under the audience’s skin not by being weird or surreal, but by being very recognizable when it comes to the Black family, and what we at home know when it comes to being in one.

ANY TIME-TRAVELING ALIENS IN THIS EPISODE?: No, Dustin. If you really want time-traveling to keep you entertained every week, that’s what the new version of Quantum Leap is for.

TO SUM IT ALL UP: Another well-made episode of Atlanta that reminds viewers as to why they’re happy about the show being back in its home turf. As interesting and fascinating as Season 3 largely was, a story like the one featured here in “Light-Skinned-ed” could not be told in Europe, or with some newly-introduced white characters the audience isn’t familiar with. It not only highlighted the dynamics that is to be found in many a Black family, but also shed more light on Earn’s relationship with his own family, and how both he and Paper Boi have no interest in making the same mistakes and falling into the same traps that they’ve seen happen to them. (Earn and Paper Boi being told by the studio receptionist to not turn around, and not look back at the increasingly angry and loudmouthed Jeanie as they leave through the Shmurda Exit or it will not work, is further proof of this.)

It also shows how older Black folk feel disrespected and unappreciated by the younger generation, as evidenced by how Jeanie thinks she is being treated by Earn and Paper Boi, and especially Raleigh’s encounter with the group of teens at the mall, how it ruins his day so much that he no longer feels confident or enthusiastic about his hat, and how he unleashes his anger and frustration at the waiter who doesn’t move quickly enough to bring some bread to the table for Gloria to take home. There were terrific performances by the guest stars, particularly by Isiah Whitlock Jr. as Raleigh (who likes to rock his Bluetooth earpiece when shopping for cell phones that come with night vision), and Michole Briana White as Jeanie. (If you’re familiar with writer-director Ava DuVernay’s work, you’ll know that this isn’t the first time Michole has played a difficult-to-deal-with family member who nobody else likes)

I could touch upon the aspects of perceived colorism in this episode, and how Jeanie sees herself as a long-suffering victim of said colorism when it comes to how she is treated by her family. But I’m not doing that here, because 1) No. 2) Hell no! 3) If there’s one thing I’ve learned from the hellmouth that is Twitter, it’s that when it comes to discussing colorism amongst Black people, there is little to no nuance or consistency anywhere to be found whenever some people feel the need to discuss it. So that Pandora’s Box is staying closed.

This episode of Atlanta has been brought to you by “Family Affair” by Sly and the Family Stone:

“Your Mom’s In My Business” by K-Solo:

And of course, “Redbone” by Childish Gambino: