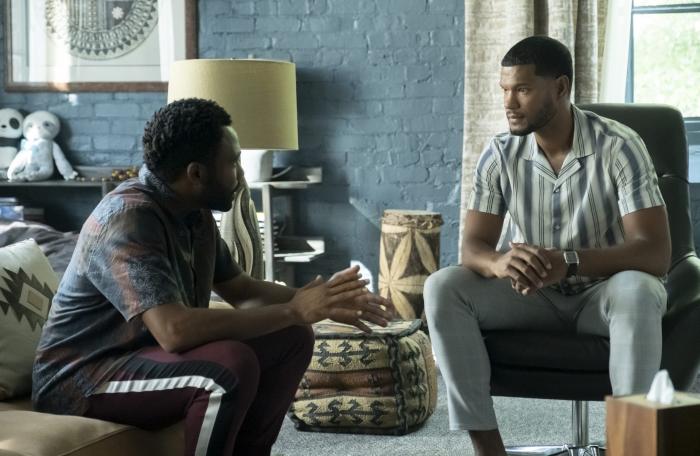 Previously on Atlanta: Earn, Paper Boi, Vanessa, and Darius are home from Europe and back in Atlanta, where things are just as weird and surreal as ever before. Darius attempts to return an air fryer at a department store for a refund during a massive riot that’s popping off for reasons unknown, only to get followed all over town by a white woman in a motorized wheelchair who is armed with a knife and who thinks Darius stole his air fryer. Paper Boi learns that Blueblood, one of his favorite rappers, has died unexpectedly, and finds himself in a scavenger hunt that he organized shortly before his death. Both Earn and Vanessa not only find themselves constantly running into their exes as they spend the day shopping at Atlantic Station, but realize that they’re both unable to actually leave.

THE STORY SO FAR: In order to improve his physical health, Earn has begun attending therapy sessions, where he opens up more about himself and about his past. An aspiring author named Lisa is approached about having the manuscript for her children’s book published and begins preparing for her life to change as a result, only to realize that her life is about to change for the worse and not for the better.

WHAT’S GOOD ABOUT THIS EPISODE?: Lisa heading to the office of the literary agency to meet Gordon Rosenbaum, and his assistant turning out to be none other than Tracy. (Yes, that Tracy, who was last seen knocking on Paper Boi’s door so he could keep crashing on his couch, only to be not be told that Paper Boi would be touring out of the country for the next few months). Earn’s therapy sessions with a Black male therapist named Dr. Tillman, where he discusses the exact reason as to why he left Princeton in the first place (Earn’s white female friend, a fellow R.A. named Sasha, held on to a suit that he had purchased for an upcoming job interview and was not willing or able to return the suit to him when he really needed it, resulting in Earn using his master key to enter her room when she wasn’t around and retrieve his suit, and Sasha feeling violated by this and reporting him to the dean, which ruined Earn’s reputation and forced him to leave), as well as the fact that he was abused at a young age by a member of his family. Lisa’s growing enthusiasm for her book being published and her future as a writer, which isn’t entirely shared by her best friend (who has been lending Lisa more than once to help her out) after Lisa reveals that she quit her job.

Earn explaining to Dr. Tillman how his attempted return to Princeton (with both Van and Lottie keeping him company for this trip) for a seminar on campus went horribly wrong as a result of racism he experienced at the airport from an employee who refused to let him board his flight and sent TSA agents after them. Lisa arriving at the library to read her book The Homeliest Little Horse (about an unattractive and unappreciated white horse who comes to the rescue of all the other darker horses when they find themselves in trouble, and is rewarded for its efforts as a result) to the children there, only to have every single one of the children make fun of her book and insult it before getting up to leave. (Except for one child who stays behind, only because she fell asleep from boredom). The revelation that Lisa was never going to be published in the first place, and that she was the target of a Massive Multiplayer Scam by Earn from the moment she was introduced in this episode, as payback for her being the airport employee who ruined his trip to Princeton and his attempt to spend more time with Van and Lottie.

And Earn mentioning the late Kim Porter as he explained to Dr. Tillman why he’s in therapy, which is mainly because his doctor refuses to believe that anything is wrong with his health, despite the physical pain he’s been dealing with? A very nice touch.

WHAT’S NOT SO GOOD ABOUT THIS EPISODE?: Nothing that comes to mind, thought like Darius, you too may find yourself wondering if Earn’s behavior is extreme pettiness or terrorism.

ANY CAMEOS FROM THE CAST OF COMMUNITY?: None, though considering it’s about a white person and their harmful racist behavior, you’d think Chevy Chase would make an appearance in this episode.

HOW MANY F-BOMBS WERE THERE IN THIS EPISODE?: A couple, mainly from Earn as he explains to Dr. Tillman what happened to him, Van, and Lottie at the airport.

ON A SCALE OF 1 TO “WHAT THE HELL DID I JUST WATCH?” HOW WEIRD AND TERRIFYING WAS THIS EPISODE?: About a 5 on that particular scale.

ANY TIME-TRAVELING ALIENS IN THIS EPISODE?: No, but if you believe what Twitter had to say about this episode, Kendrick Lamar was in it, and was simply in the background of the scene between Lisa and her best friend as a regular-degular extra.

WAIT, REALLY?!?!: Take a look at the screenshot in this tweet and judge for yourself.

TO SUM IT ALL UP: This is the second episode to air after “The Most Atlanta” as part of the hour-long Atlanta season premiere, and what an impressive and powerful one-two punch this turned out to be to kick-start the season. Not only do we get to see Earn reveal so much about himself in ways that he has never done throughout the entire run of the show so far, but we see him get to do so with a Black male therapist, and bond with him in ways he wouldn’t be able to with anyone else (such as Tillman asking whether Sasha and Lisa were white, and him quickly understanding when Earn tells him that the question isn’t even necessary since they both know the answer). And in seeing this, we learn how much of Earn’s actions and goals are motivated by spite, and his need to prove himself and make fools of those who look down on him and underestimate him, even when Tillman tells him that it isn’t always the best approach to take.

(FYI: If you heard Dr. Tillman’s voice and found yourself wondering if he’s the same person whose voice is heard in every commercial for Atlanta, as well as the “FX presents…” and “Viewer discretion advised” portions of each episode, you’re not alone and yes, that is the same person)

By the time the episode ends, we realize just how much Earn thrives on spite, as evidenced by what we see him do to Lisa, and how her life soon ends up in a downward spiral as a result of what he sets in motion. And though it may seem extreme for Earn to do as much he did to hurt Lisa…once we learn who she is and what she did, it becomes very hard to feel any sympathy for her. (It also shows the opening scene in a new light, in which Lisa greets her Black male neighbor as he comes home from work, only for him to ignore her completely, and she is later seen looking at him in his apartment through her window. Whether she’s doing it for lust or to make sure he’s not doing anything suspicious is unclear, but it gives further insight into who she is and makes the ending even more of a gut-punch)

We have all seen far too many videos of Black people being forced to confront racism yet again as a result of white people refusing to mind their own business as they demand to be shown respect and deference that they haven’t earned, and some of these confrontations have resulted in either violence or police interference or both. If given an opportunity to be petty and strike back at a white aggressor who made your life difficult, who took away your peace of mind, and show them the true meaning of “F-ck Around And Find Out,” it’s hard to imagine that most Black people would turn that opportunity down. (Don’t even bother asking me if I would do what Earn did, because the answer will always be “yes.”) Paper Boi and Darius may not agree with what Earn did and how he did it (Considering that this is the same Paper Boi who expressed how proud he was of Earn after witnessing him stick a gun in someone else’s luggage in order to avoid getting arrested by the TSA, his response was somewhat surprising), and Earn may have realized afterward that therapy is still a necessity for him, but at the end of the day (a phrase that has forever been ruined for me thanks to Black reality shows on VH1) … you and your white woman’s tears shouldn’t expect much sympathy or forgiveness when your racism and your ignorance ruins your life by blowing up in your face like a land mine.

This episode of Atlanta was brought to you by “The Payback” by James Brown:

“One Way Or Another” by Blondie:

And of course, “Cold-Blooded” by Rick James: 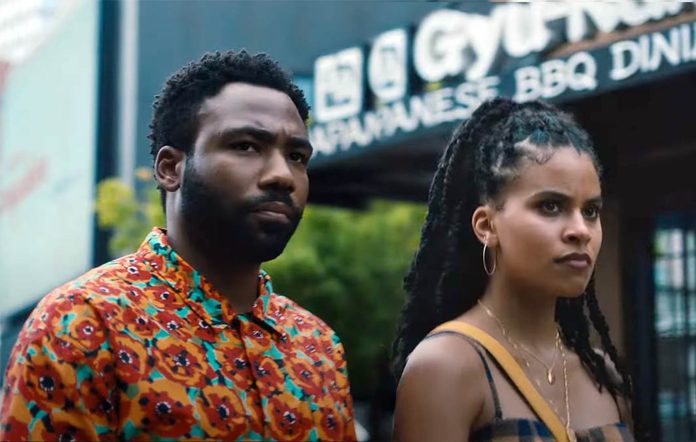