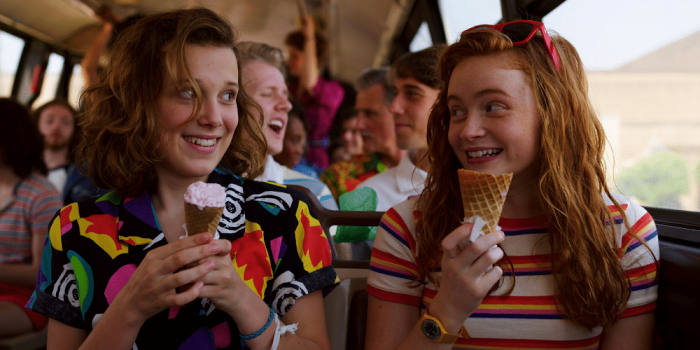 Thanks to 'Stranger Things,' Netflix Is Cocky Again

Over the last three months, it felt odd after all these years for Netflix to be showing signs of retreat. Reed Hastings didn’t gloat about their numbers as much, and Ted Sarandos didn’t defend its problematic stars with the same fervor (that’s not true, actually). They laid off 500 employees; they canceled some series that hadn’t even gone into production yet; and they announced that they’d do what they’d never dreamed of doing: Adding an advertising tier.

What a difference three months — and the enormous success of Stranger Things — makes. You resurrect two ’80s songs, and you’re right back on top of the world.

Granted, Netflix still lost 1 million subscribers worldwide in the last quarter (and 1.3 million total in the United States and Canada), but that’s significantly better than the 2 million subscribers it expected to lose after the 200,000 subscriber loss in the first quarter. “Less bad results,” is the new rallying cry of Reed Hastings! Not only did Netflix manage to lose fewer subscribers than anticipated, it also managed to eke out a revenue growth of 9 percent despite paying $70 million out in severance packages.

Still, the ad-supported tier is coming (probably in early 2023), although apparently, the it will not grant access to all the content. They’ll be cracking down on passwords, too: They’re rolling out another test in Latin America, where they will charge $3 for an extra household, which ain’t so bad, actually, if you can convince the folks who share your password to pony up the extra $3 a month (if they are your parents, I’m sure they’ll just swallow it).

Meanwhile, Hastings is singing the praises of the binge model again — all this content! Immediately at your fingertips! — while insisting that linear television will be dead in the next five to ten years. If the NFL moves to streaming, he’s probably right (Apple TV is currently the favorite to take over NFL Sunday Ticket, which will not only put another nail in linear TV’s coffin but could spell the demise of Direct TV). Hastings is also bragging about the “convenience” of their big-budget movies, including Gray Man starring Chris Evans and Ryan Gosling, out this weekend.

“This is an enormous, big-budget action film that normally people would have to go out and spend an enormous amount of money on to go see, and it’s going to premiere on Netflix,” Hastings said, which would be great if 1) people were more excited about Gray Man, and 2) people were less excited about returning to theaters post-COVID (I seriously saw a sold-out showing of Top Gun: Maverick on a Thursday night two months into its release).

Still, when Netflix does well, the streaming industry does well (and shares in media stocks rose after Netflix’s earnings announcement yesterday), so that’s good for everyone. Then again, since Stranger Things aired, I haven’t been able to find a goddamn thing to watch on Netflix, and no, I’m not going to watch Persuasion. I got bored enough the other night that I tried to watch Ricky Gervais’ stand-up special out of morbid curiosity. I made it halfway through and fell asleep. Even putting the transphobia aside (and there is so so much of it), he’s completely lost it. He spends the entire special trying to get a rise out of his audience by telling terrible, intentionally offensive jokes and then repeatedly laughing at his own material (because no one else was).

“As Nielsen will announce on Thursday, our share of US TV viewing reached an all-time high of 7.7% in June (vs. 6.6% in June 2021), demonstrating our ability to grow our engagement share as we continue to improve our service,” Hastings added. I’ll be curious to see what that will look like, however, in between seasons of Stranger Things and Bridgerton and without Ozark, because I don’t see another big hit on the streaming platform coming until the next season of Cobra Kai, nearly two months from now. I very much doubt that Sandman is gonna bridge that gap.