'Stranger Things' Season 4 (Part I) Teeters Between Greatness and Tediousness

The Duffer Brothers really swung for the fences this season. They were mostly successful.
Both the presentation of the show and its scope are supersized this year. Each episode clocks in at over an hour, with the seventh episode at 90 minutes long. The universe of the story has expanded geographically and chronologically, taking us out of Hawkins to California, Utah, and Russia. The beginnings of The Upside Down, which is also bigger this time around, are revealed as is the truth about Dr. Brenner’s program from which Eleven escaped at the beginning of the first season.

This season’s arc is driven by four distinct storylines, one of which they could have done away with completely and not compromised the integrity of the show, and another that’s over-inflated and stuffed with dour scenery and monologues. It’s necessary but it could have been edited. Then there are the two primary plot lines The Duffer Brothers built to converge neatly in the last two episodes airing later this year. This season has a similar feel to The Conjuring Universe in the way The Duffers have tied the events of multiple generations, locations, and objects to each other. However, Chad and Carey W. Hayes gave themselves more room to build those connections in The Conjuring movies. The Duffer Brothers stuffed two pounds of meat into a one-pound sausage casing. This season has too much going on and much of it is mundane, real-world stuff as opposed to the scary sci-fi story we were promised. I found myself frustrated as they frequently cut from one storyline to another, but if you can hang in there past all of the boring bits, the seventh episode pays off. 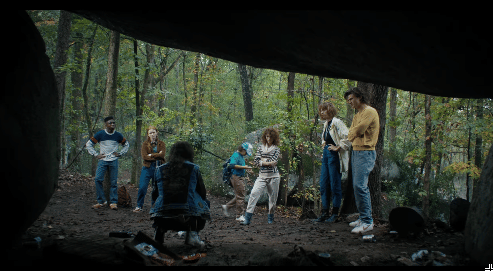 As usual with Stranger Things, every episode is a pastiche of 80s movie references. The heaviest influence this season is the original Nightmare On Elm Street with heavy doses of The Exorcist and Poltergeist. More importantly, The Duffers drew on the “Satanic Panic” of the mid-eights to inform this season. The new character, Eddie Munson — who everyone is going to really love or really hate — is the embodiment of every 80s middle-class parents’ fear that their kid has fallen in not only with the “wrong” crowd but might be in league with The Devil. The Hellfire Club, the name Eddie has given to his gang of Dungeons & Dragons players, is branded as a cult when bad things start happening in Hawkins (again.) The other new character introduced at Hawkins High, perfect mega-jock Jason Carver (played by Mason Dye), is the opposite end of the spectrum from Eddie. He’s possibly more dangerous than every member of The Hellfire Club put together as he whips the town into a frenzy to hunt down Eddie and his friends — who include Dustin and Lucas — who Jason believes are responsible for the rising number of deaths.

My real nitpick about Season 4 is that while the younger cast does an excellent job, some of these older “kids” are too old to convincingly play high school students. Joe Keery and his hair are 30, Natalia Dyer (Nancy) is 27, Charlie Heaton (Jonathan) is 28 and Joseph Quinn (Eddie Munson) is 29. They all look it. That is fine, but there better be a huge time jump, or a new cast in Season 5. We also have to talk about the sartorial choices made for the cast this year, too. First, Will Byers (Noah Schnapp) has outgrown the Dorothy Hamill bowl cut. I know that lots of kids in the 80s rocked that look; I was one. But after the age of seven or eight, boys didn’t get that cut anymore. I spent most of Will’s scenes being distracted by his hair, which is a shame because he did a nice job with the limited amount of scenes he had this season. He’s a good-looking kid, with a bit of a Daniel Radcliff vibe going on; he just needs a better haircut for season 5.

My favorite fashion of the season (besides literally everything in the roller skating rink) belongs to Nancy. It’s on-brand for her character to look like someone’s stressed-out Working Mom, but I really like how they dressed her as a movie theater soda cup in the second episode. 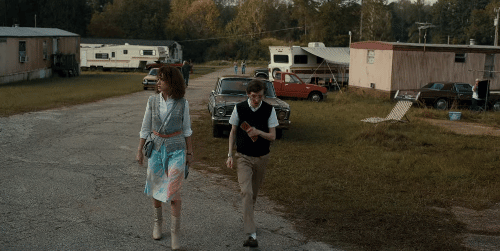 There is not one moment in these any of these first seven episodes when The Gang is all together, and the season suffers for it. Eleven is on her own, reliving her past trauma in an attempt to get her powers back. Will, Jonathan, and Mike are bungling their way across the Southwest. Joyce and Murray (going for his Bob Newby unexpected hero moment) are working to free Hopper. Dustin, Lucas, Max, Steve, Nancy, and Robin unravel the mystery of The Upside Down in Hawkins and face off against this season’s Big Bad — Lord Vecna. 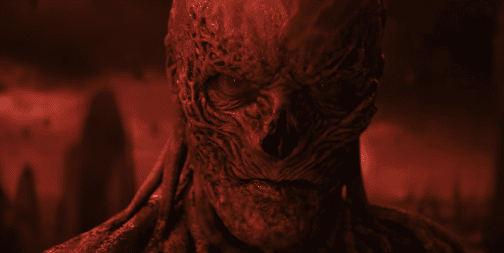 Despite its shortcomings, there’s a good character and relationship development in these episodes. If they can stick the landing with the last two episodes, when hopefully everyone converges in Hawkins, it will all be worth it though. Episode 8 is around 1 hour, and 25 minutes; and 9 is almost two and a half hours long so there’s plenty of time to wrap up this season in a satisfying way … or kill our waning love completely.


← A Major Character Exits 'Fear the Walking Dead' in a Sham Episode | No, Having a Baby in America Isn't Terrifying At All: 'Our Father' and a Failure of Legal Protections →