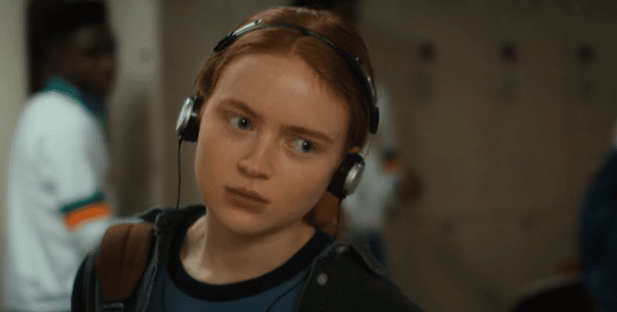 (Spoilers abound. Turn back if you haven’t watched “Dear Billy” yet.)
Stranger Things Season 4, episode 4 “Dear Billy” is doing for “Running Up That Hill” what Donnie Darko did for “Mad World.” Kate Bush’s 1985 single was her most successful, entering the UK charts at number 9 and peaking at number 3. It was also a hit in the US, reaching the top 30. It’s a song about wanting to swap lives with someone, to gain a better understanding of how they view the world.

The idea of longing for a deeper understanding has a lot of meaning for Sadie Sink’s Max at the beginning of this season of Stranger Things. Max is drowning in guilt over what happened to Billy during the fight against the Mind Flayer at the end of Season 3. Between seasons she broke up with Lucas and is studiously avoiding everyone who had anything to do with Billy’s death. Isolating herself from all of her friends while her mother drinks herself to sleep every night. Lord Vecna zeroes in on this guilt and makes her a target of his plot to collect souls to strengthen his powers early on in the story, although no one knows what’s happening until it’s almost too late. 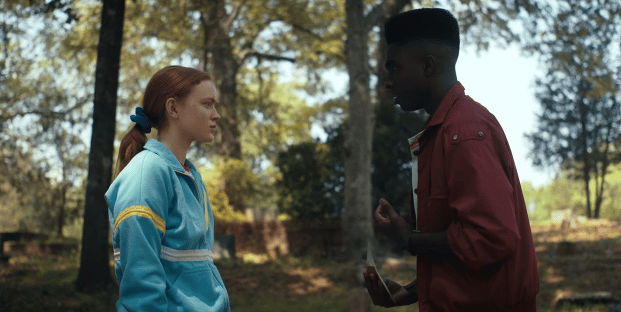 Lucas, too, is suffering. He’s desperately trying to distance himself from the weirdness of previous seasons’ events by joining the Hawkins High basketball team and ditching out on The Hellfire Club’s Dungeons & Dragons campaign. He doesn’t understand why Max broke up with him. He sees her suffering and wants to be there to help her but she continually pushes him away. When she realizes that she’s being targeted by Lord Vecna she assumes her fate is the same as Chrissy The Cheerleader and Fred The Newspaper Nerd (I can call him that because I, too, was a newspaper nerd.) Max writes a series of letters to her loved ones that she leaves for them to find after her death. Dustin, Lucas, and Steve take her to the cemetery where Billy is buried so she can read her letter to him aloud at his grave. There she hands Lucas a letter of his own but he doesn’t want it. “I’m right here! We’re right here!” he insists. He cannot understand why she won’t communicate, she cannot understand why he insists she’s worth communicating with.

Her letter to Billy is a study in survivor’s guilt. She feels guilty about how Billy died, that she just stood there and watched. She feels guilty that she can’t tell anyone how he died, or that he died a hero — saving her and Eleven’s lives. She feels guilty that they hated each other so much while he was alive. Everything would be all right again and they might have become friends, like real siblings, if she had done more to save him during the battle at Starcourt Mall. She apologizes to him and signs off “your shitty little sister, Max.” And is immediately swept away into Vecna’s dreamscape where he confronts her, disguised as Billy. Vecna As Billy tells Max that he thinks a part of her wanted him dead, is glad he’s dead. He pushes her to admit this, and finally reveals his true face. Max runs off into the dream cemetery, which eventually opens up onto a hellish, red tinted landscape and the ruins of the mansion Vecna calls home.

While all of this is happening, Nancy and Robin have been working to gain access to a previous player in Vecna’s plans. Former Hawkin’s resident Victor Creel was convicted of murdering his family back in 1959 but claimed the demon in his house did it. Creel is in Pennhurst Asylum (that’s a real place!) now, under the care of Dr. Hatch. As they tour the facility, Hatch explains to the girls, “We’ve found that music has an effect on the broken mind. The right song, particularly one which holds some personal meaning, can prove a salient stimulus.”

He’s right. The guys rush to find Max’s walkman and cassette tapes, blasting “Running Up That Hill” into her ears, hoping it will somehow anchor her to them. The song cuts a hole through the miasma of The Upside Down, revealing a window back to the real world. As Max is about to succumb to Vecna’s power, she remembers her friends through flashbacks to season three events. And that understanding, that she does have friends, that Lucas IS there for her, that they do all love and need each other, ultimately gives her the strength to lash out at Vecna and make a break for it.

Kate Bush’s song swells in the background as Max stumbles across uneven ground, towards the pulsating window leading back to Hawkins — back to her friends, her love, her life — Vecna hurtling projectiles at her from the sky. Was there a hill? The stunning visuals of the blood-red land and atmosphere of The Upside Down, Max running full out, dodging giant chunks of debris as they hurtle towards the ground. All the while Kate Bush’s lyrics plaintively crying out about making deals with God to swap places with those we love. Max would swap places with Billy if she could, exchanging his death for her own. She would swap places with any of the kids at Hawkins High just to feel “normal” again. She wishes Lucas could swap places with her to really understand how terrible everything is in her world. But mostly she would swap places to get from The Upside Down back into the arms, and safety, of those who love her most. It is a sad and desperate scene, made all the more melancholy by Bush’s lyrics.

Thirty-seven years after “Running Up That Hill” was released The Duffer Brothers and Sadie Sink with her fierce performance in this scene have given the song, and the artist, new life and new charts to conquer. It’s been stuck in your head for days already anyway, admit it. So here’s a link to the original, very 80s-looking music video.