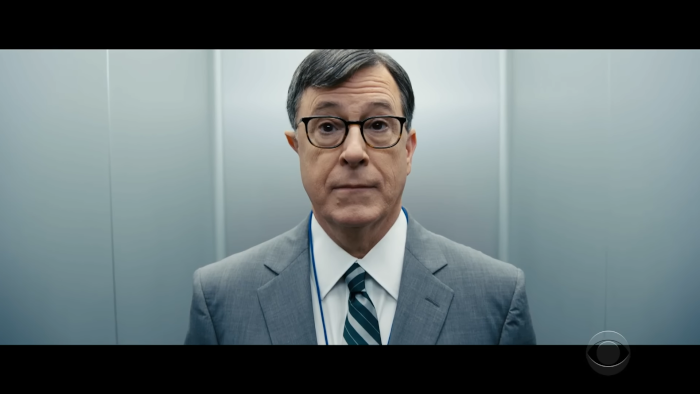 I was late to Severance. I have 16-month-old twins. If I watch anything in a timely manner, it is a miracle. Once I did, I loved it. My wife and I finished it in about three weeks (this was fast because, again, twins). I may have watched and finished it even faster, however, if it had retained its super, totally real scenes with Stephen Colbert.

In the most recent episode of The Late Show with Stephen Colbert, the eponymous host revealed that he had scenes filmed for Severance. While they ended up on the cutting room floor, he decided to share them with the audience. They feature Stephen, here known as Steve C, starting at the mysterious Lumon. It’s clear immediately that this will be a sillier trip down the elevator, as Colbert passes gas on his way down to work, only to wonder who dealt said gas when he reawakens as his Innie (a work version of one’s self that takes over when you work at Lumon).

Colbert, being unleashed on Lumon is one of the funniest sketches his team has produced in a while. That isn’t a slight towards the Colbert Crew. They make great stuff all the time. This sketch was just a perfect use of not only the material at hand but Colbert himself. He gets to let loose and have fun. How John Turturro, Tramell Tillman, and Adam Scott were able to keep a straight face, I have no idea. It was probably easy for Adam Scott as he was clearly not available to film with everyone else. But hey, scheduling is tough.

As I eagerly await Severance’s second season, this was a wonderful placeholder.

← The Gossip Rags Are Trying to Manufacture a Feud Between Savannah Guthrie and Hoda Kotb | Beto Lets Loose On A Heckler, NPR Clutches At Pearls →