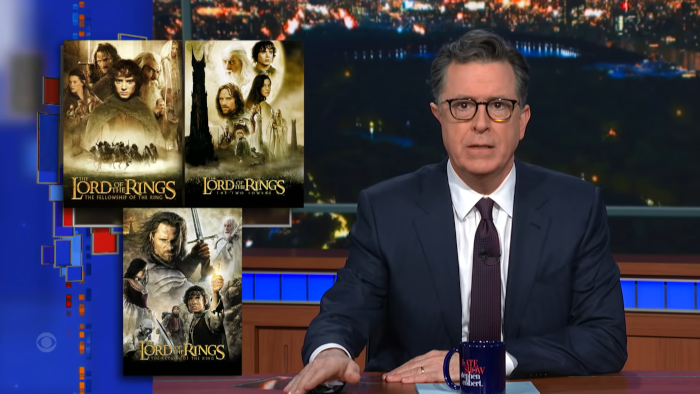 Sometimes something will come along that makes me deliriously happy. Twenty years ago this Sunday, that thing was Peter Jackson’s big-screen adaptation of JRR Tolkien’s The Fellowship of the Ring. That movie blew my twelve-year-old mind. It opened up new worlds to me and sent me down a path of fandom I did not know was possible. My love for The Lord of the Rings was born that day and has grown ever since. Now, twenty years later, I can celebrate that love with something else that makes me deliriously happy: a star-studded rap tribute to the greatest movie trilogy ever.

Stephen Colbert is a well-known The Lord of the Rings superfan. So much so that his guests have, on occasion, made a game out of trying to stump him with LOTR trivia. It only makes sense that he would launch a tribute on the twentieth anniversary of his favorite films. I just didn’t expect it to slap as hard as it does! It’s very silly, of course, but give me Hugo Weaving rapping in Elvish on every record going forward, please, and thank you.

Speaking of Weaving, he’s one of seven cast members to appear in the video. I won’t spoil who the rest are, since the reveals are part of the fun. What I will say is that while they couldn’t get everybody, there are some solid replacements. The effort put into this video is pretty immense, but even Stephen Colbert doesn’t have the reach of Sauron and his many spies.

While this is all fun and games, Colbert also brings up a great point. Where’s the fanfare for this classic trilogy? Not only is The Lord Of The Rings film trilogy a massive achievement, but it also consists of some of the last old-Hollywood style blockbusters. Where now we would see green screens and computer-generated soldiers (and make no mistake, LOTR has some of that), The Lord Of The Rings trilogy contains scenes with hundreds of extras, shot on locations that are home to large sets built from scratch. They are a symbol of a bygone era, filmed right when that era was coming to an end.

The Lord of the Rings film trilogy is the greatest of all time. End of article. Kind of. You still need to watch the video.


← The Final Straw that Led to The Decision to Fire Jeff Garlin from 'The Goldbergs' | Review: Joaquin Phoenix's 'C'mon C'mon' Will Make You Hope for a Better Future →