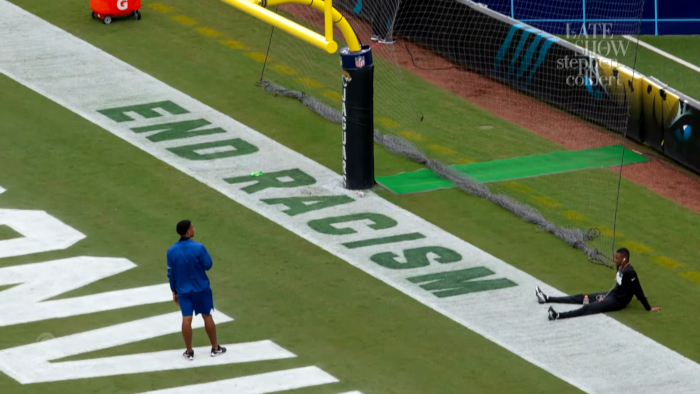 I am not a fan of the National Football League. It’s important to get that out of the way. There was a long time where I considered myself a Packers fan, but that ended long before Aaron Rodgers started doing his own research. My breaking point with the league came when Colin Kaepernick was, essentially, blacklisted for using his platform to protest racial injustice. It should come as no surprise that a league that goes out of its way to suppress Black voices has a racism problem.

The newest episode of The Late Show with Stephen Colbert kicked off (nailed it) with a video package about the NFL. It starts with a step in the right direction. The Washington Football Team changed its name to the Commanders. Unfortunately, but not surprisingly, that’s followed by incidents of racism among coaches and fans. Everything in the video is real, except for the excellent tag at the end.

None of this is new. The League only last year agreed to stop doing “race-based brain testing.” Of course it’s plagued by racism. Unfortunately, it just doesn’t seem to matter to people. I’ve had friends who claim to be allies and progressives and the like all drop that the minute their Fantasy football draft starts. I know it’s complicated, and it’s not like every other sports league is perfect, but the NFL seems to revel in its shittiness and continues to get worse.


← Gwyneth Paltrow Eats Vagina Candle for Super Bowl Ad | The Watergate Era Content is Coming, But Will Anyone Care? →