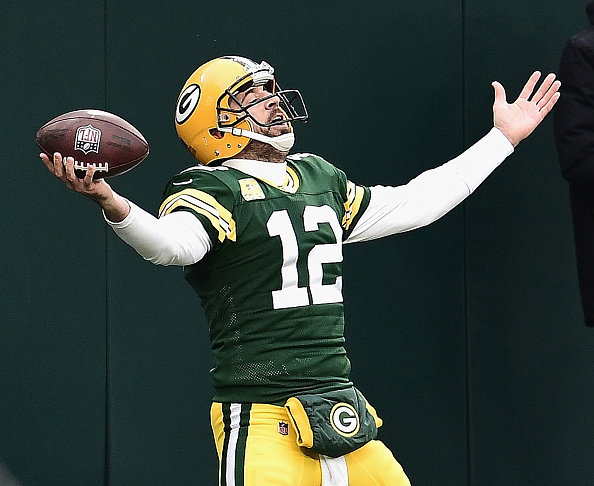 Over the weekend, Aaron Rodgers and the Green Bay Packers were eliminated from the NFL playoffs after the QB struggled against the San Francisco 49ers and the frigid temperatures of Lambeau Field. Social media had a field day mocking Rodgers, while throwing a lot of his anti-vax comments back against him. The loss also came right after Rodgers fumed about Joe Biden calling our current predicament in America a “pandemic of the unvaccinated.”

“When the president of the United States says, ‘This is a pandemic of the unvaccinated,’ it’s because him and his constituents, which, I don’t know how there are any if you watch any of his attempts at public speaking, but I guess he got 81 million votes,” Rodgers said. That COVID rant was subsequently hijacked by a Donald Trump spokesperson as “proof” of the Big Lie.

How the hell did Aaron Rodgers find himself being quoted to support Donald Trump’s contention that the 2020 election had been stolen? Is this what happens when you’ve been radicalized by Joe Rogan? How did a beloved QB, Jeopardy! host and Celebrity Jeopardy! winner find himself not only the recipient of misinformation but a spreader of it?

Truthfully, Aaron Rodgers has been susceptible to conspiracy for years. I recalled listening to him on a few podcasts years ago before the rise of Trump. He sounded mostly reasonable, although he had on more than one occasion shared details of his 2005 UFO encounter. At the time — pre-Trump — this sounded mostly silly and harmless. “Oh, the Green Bay Packers’ QB had an encounter with aliens?! Cool!” But we live in a different world now, one where the off-the-cuff remarks about a UFO encounter are less an adorable story from a doofy NFL quarterback and more like the seeds of an insidious crackpot conspiracy theorist.

I listened to an Aaron Rodgers podcast appearance from six years ago — in the time before Trump — and what sounded charming and harmless then now sounds like the beginning of Rodgers’ undoing. He not only spoke of an alien encounter but of a megalithic alien structure that’s blocking the light from a star 1200 light-years away (it was dust), and he had some other thoughts about the government covering up UFO sightings, which in and of themselves weren’t that alarming. However, Rodgers — who unsurprisingly also confessed that he was a huge Malcolm Gladwell fan — only seemed to pick up bits and pieces of the information he relayed but confessed ignorance to the larger story. What’s that maxim about how a “little knowledge is a dangerous thing”? That’s Aaron Rodgers in a nutshell. He only knows enough to be dangerous.

On that same podcast, Rodgers also confessed that he was a “huge fan” of the History Channel, which has evolved in the last 15 years into a hotbed of conspiracy theory. Rodgers took special notice of two shows on the History Channel that he loves: America Unearthed and Ancient Aliens. I don’t know much about those two series, specifically, except that on American Unearthed, “if Dan Brown wrote about it, odds are good that [host] Scott Wolter believes it and investigates it.”

Meanwhile, Ancient Aliens posits, as Salon has noted, that “everything from death rays to macaroni and cheese was actually invented by extraterrestrial visitors thousands of years ago and given to humans.” The Awl (RIP) even suggested in an article titled, “Ancient Aliens is everything that’s wrong with America,” that Ancient Aliens approach to its topics parallels the Republicans’ approach to science.

Ancient Aliens deployed its anti-scientism earlier than the G.O.P., and beat out Donald Trump’s beliefs about birth certificates by a full two years. Both they and the show rely on an attitude that Hannah Arendt called “vulgarity,” which, “with its cynical dismissal of respected standards and accepted theories carried with it a frank admission of the worst and a disregard for all pretenses,” something that viewers, whether of Fox News or “Ancient Aliens,” take not as a criminal condescension, but which they “mistake for courage and a new style of life.”

Just because something calls itself The History Channel doesn’t mean it contains actual history.

In 2012, years before Trump took office, the Smithsonian mag described the approach of Ancient Aliens in an article called “The Idiocy, Fabrications, and Lies of ‘Ancient Aliens’” thusly:

There was so much wrong with the Ancient Aliens episode that I could spend all week trying to counteract every incorrect assertion. This is a common technique among cranks and self-appointed challengers of science; it is called Gish Gallop after young earth creationist Duane Gish. When giving public presentations about evolution and creationism, Gish rapidly spouted off a series of misinterpretations and falsehoods to bury his opponent under an avalanche of fictions and distortions. If Gish’s opponent tried to dig themselves out, they would never be able to make enough progress to free themselves to take on Gish directly. Ancient Aliens uses the same tactic—the fictions come fast and furious.

The “Gish Gallop” sounds exactly like every episode of Joe Rogan’s podcast.

Aaron Rodgers has been huffing the conspiracy paint for years, which in some ways illustrates that even if you’re “smart” enough to attend Berkeley or win Celebrity Jeopardy, it doesn’t mean you’re intelligent enough to discriminate between accurate information and misinformation. Aaron Rodgers will clearly believe anything he is told, as long as the misinformation is spoken with an authoritative voice and comes with citations, regardless of how flimsy those citations might be. Anyone who disagrees with Rodgers, meanwhile, is getting their information from the wrong (i.e., respectable, science-based) places. Given how easily he’s manipulated, and how he selects only the information that reinforces his own skewed worldview and validates his ego, it’s only a matter of time before he falls headfirst into a QAnon rabbit hole.

← Review: 'Memoria' is a Languid Genre-Bending Drama that Invites the Audience to Embrace the Unknown | What's Going On with 'All-Star Weekend,' the Unreleased Bro Comedy Where Robert Downey Jr. Plays a Mexican? →