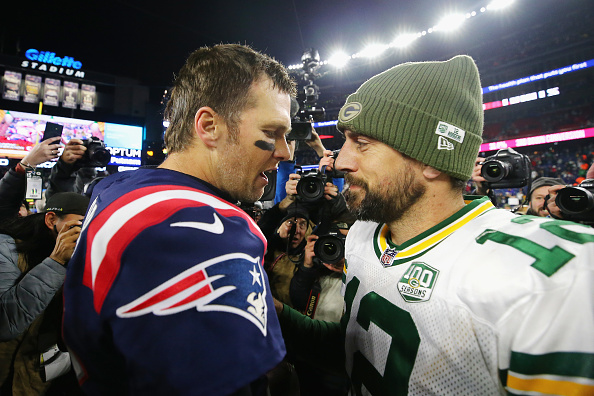 Can we all take a beat this morning and celebrate not only one of the greatest — if not the greatest — playoff weekend in NFL history, but also that next weekend’s round of playoffs, the AFC and NFC championships, will not feature Aaron Rodgers or Tom Brady. That last time neither one of those made it to the Conference Championship round was 12 years ago, in 2009 (the year that Manning threw a pick-6 in the Super Bowl and Drew Brees and the Saints won).

If you’re neither a Bucs nor a Packers fan, it was a good weekend for NFL fans. Aaron Rodgers’ 38-year-old bones couldn’t deal with the frigid temperatures in Lambeau and he fell to a piece of chewing gum with an arm, Jimmy Garoppolo, whose best games are those that require the least amount of effort from him (Garoppolo managed all of 131 yards on the day with no TDs and one interception, although it should have been several more). Granted, the Packers’ special teams melted down giving up a blocked field goal and a blocked punt for a TD, but it’s not the special teams’ fault that the Packers could only muster 10 points, and only 3 points after the first drive of the game. That was Aaron Rodgers. The jokes on Twitter — where Rodgers now goes by the nickname “Throw Rogan” — were phenomenal.

Everyone thought Throw Rogan had a shot, but they didn't bank on his natural immunity to winning.

Why is everyone taking all these jabs at Aaron Rodgers?

Aaron Rodgers and the Packers can still make it to the Super Bowl if Mike Pence has enough courage.

Everyone stop making fun of Aaron Rodgers, he hates being needled.

Aaron Rodgers will spend the next few weeks contemplating his future, where either the Green Bay Packers will bend to his will for another season or finally say enough and ship him off to Minnesota like the drama magnet before him, Brett Favre. I’d expect any other QB who wins the MVP Award (as Rodgers is expected to do) and lost in such spectacular fashion to be angrier and more energized than ever to lead his team back next year, but Rodgers has never been much of a team player. After entering 2021 as one of the most popular athletes on the planet — he hosted Jeopardy! and was beloved! — Rodgers ends his 2021-22 campaign as one of the least liked players in the league.

Meanwhile, the most polarizing player in the NFL, Tom Brady — who has both high favorability ratings and the second-highest unfavorability ratings behind only former teammate Antonio Brown — also lost over the weekend. Brady did not play poorly, at least not in the second half when he managed to bring the Bucs back from a 27-3 deficit to tie it at 27. However, he left a little too much time on the clock (42 seconds) and Matthew Stafford and the Rams managed to eke out a win with a last-second field goal. It’s a good story for Stafford, who spent the last 11 seasons toiling away in Detroit before he finally got to see what it was like being surrounded by an actual NFL team instead of a rotating cast of bad draft picks.

Yeah, sex is pretty great. But have you ever seen Aaron Rodgers and Tom Brady both get eliminated from the playoffs?

Somehow, despite seeing Brady and Rodgers eliminated — and Joe Burrow and the Bengals beating the Tennesee Titans with a last-second field goal (sorry, Derrick Henry) — the NFL saved the best game for last. The Chiefs and the Bills played in one of the best playoff games ever, scoring 25 points between them in the last two minutes of regulation. Josh Allen and the Bills scored with a 1:52 left to take the lead; Patrick Mahomes and the Chiefs answered with another TD (Tyreek Hill is fast, y’all!), taking the lead with around a minute left. Allen turned around and scored again, leaving the Chiefs with only 13 seconds to score a field goal. The Bills should have kept the ball on the ground for the kickoff and ran out a few of those ticks, but alas, they kicked it into the endzone. Mahomes managed to use those 13 seconds to move the Chiefs into field goal range, tie the game and send it to overtime. We all knew that whoever won the coin toss would win the game. Neither defense had any gas left in the tank. The Chiefs won the coin toss, and soon the game. Josh Allen didn’t even get to set foot on the field during overtime because the NFL’s overtime rules are a travesty.

It’s hard not to be excited for Mahomes, one of the most popular and least problematic players in the NFL (although his brother is an asshole). Then again, my excitement level faded as soon as the Chiefs’ fans celebrated by doing the Tomahawk Chop, not that the media is paying any attention to it.

The media when Kansa City Chiefs fans are doing the chop. pic.twitter.com/mzG4cgqixp

The Chop is nothing more than Redneck Spite. They know it’s racist — at this point, it’s part of its appeal for those who do it. The same goes for the Atlanta Braves. It’s pitiful. It has to stop. They should get Stefon Diggs on it.

← Start Your Week Off Right By Watching Jennifer Coolidge React To Impressions Of Her | How Is an Artist Supposed to Make Money When Even the Super Bowl Halftime Show is Paying in Exposure? →