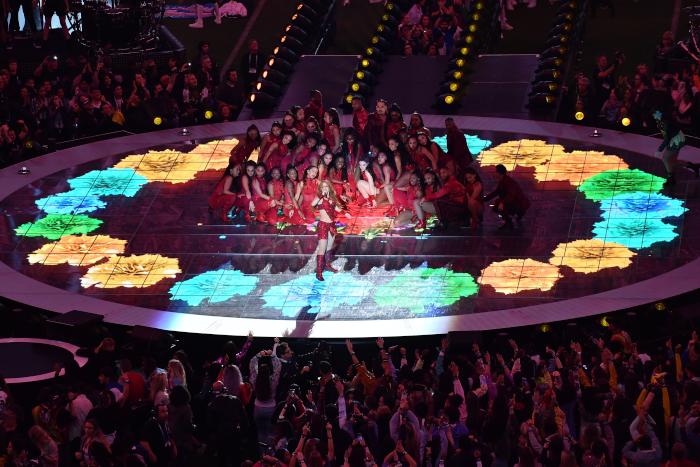 How Is an Artist Supposed to Make Money When Even the Super Bowl Halftime Show is Paying in Exposure?

When the trailer for the Super Bowl halftime show came out, the 2000s teen and the 2010s young adult in me were PUMPED. Finally, a chance to see generational GOATS, Kendrick and Eminem, going toe-to-toe on the same stage! Mary J. Blige named the co-headliner, as she DESERVES. And also Snoop Dogg. I don’t want to acknowledge the other guy. At last, we have a halftime show centered around hip-hop… IN TWENTY-TWENTY-TWO, in cleaned-up versions. I bet Roger Goodell still put out some feelers around to see if they could get someone less ethnic, maybe the Cha-Cha Slide guy that he danced at his daughter’s wedding.

But the NFL has a knack for bringing out the worst in people, mostly through repeated concussions, but also in fostering a culture of screwing people out of the compensation they deserve. On Friday, dancer and choreographer Taja Riley called out the halftime show organizers (chiefly, Jay-Z’s Roc Nation) for trying to pay backup dancers with the worst currency of late capitalism: exposure (crypto comes in second, of course). Riley, with years of experience working with every single major star, including Beyoncé, didn’t mince words:

Taja called out the show’s lead choreographer Fatima Robinson, herself a legend, and BlocLA, an agency specialized in dancers, for even considering this possibility. Robinson defended herself claiming that the show will host over a hundred paid dancers, with the “volunteer” dance crew being part of the field cast. This is the audience you have seen on the field during most performances, usually local performers brought in to provide artists with the energy of a live show without having to actually rope in spectators from the Stadium, which would be a logistical nightmare. Of course, most times it is a good trade-off: The performers get to attend a free concert by a major popstar and all they have to do is just have a good time and maybe catch the stars when they crowd surf.

But that isn’t at all the deal being offered here. With the Super Bowl being hosted in Los Angeles for the first time since 1993, the producers thought this was a good chance to exploit desperate artists trying to catch a break. That’s quite literally what Robinson said in her defense, save for the exploit part. These performers are expected to attend eight mandatory training sessions in or around the SoFo Stadium, each one extending for at least eight hours. Missing just one will be a cause for … is it firing if they are not being paid? And because you can’t have injury without insult, the dancers are expected to provide their food and transport, because as we all know, Los Angeles is a city where everything is close by and offers plenty of affordable public transportation. They are encouraged to provide their transportation EVEN ON THE GAME DAY, and if they could pleeeeease use Lyft or Uber to avoid overcrowding the routes into the stadium, thank youuuuu!

I have a little bit of eyewitness experience in event planning, and whenever you see this kind of shit being offered, it means someone in the chain of command is skimming money off the top for themselves, and it means someone down the chain of paid workers will get screwed. Once again we are seeing “exposure” rear its ugly turtlehead. Weren’t we supposed to have left this in the past along with Amanda Palmer’s Patreon career?

I don’t need to make an argument as to why the organizers need to pony up ALL OF THE EXPENDITURES of the performers, at the very least providing food and a bus, because trying to get hundreds of people into one place, along several days and amid a pandemic is something you might get for free in LA but don’t expect any good performers. Nor should they expect the kind of people that, for example, won’t end up crowding around the cameras to get their 0.15 seconds of fame or attempt to dry hump Eminem. If they plan to go on like this, it is going to be a shitshow. They need to pay up because they have the money.

That’s the most insulting thing. If the Super Bowl halftime show won’t pay you, who the hell will? I think any dancer would consider being part of that show a highlight of their career. Call me a traditionalist, but I think a career highlight should net you money, or at the very least leave you in the black. Yes, I know this is a global problem because as long as finance bros skirt around reading something more than the preface of a Yuval Noah Harari book, the arts will never be taken seriously as a J.O.B. Even for something like hip-hop/street dancing, practiced and enjoyed by an audience of millions.

Working for “exposure” only works for two kinds of stages: Small, niche engagements that might help an artist get to a higher tier, provided certain conditions are met (like having a green room or a guarantee that relevant gatekeepers will be in the audience); or for superstars, like the ones headlining the Super Bowl halftime show, who famously don’t receive a salary but get a chance to reach an audience of hundreds of millions.

As for everyone else down the food chain, they all deserve to at least get food and transport vouchers. If the Super Bowl halftime show avoids that responsibility, it sets a very dangerous precedent.


← Brady, Rodgers Eliminated in Wild NFL Playoff Weekend | This Is Either Exhausting, Genius, or Both →