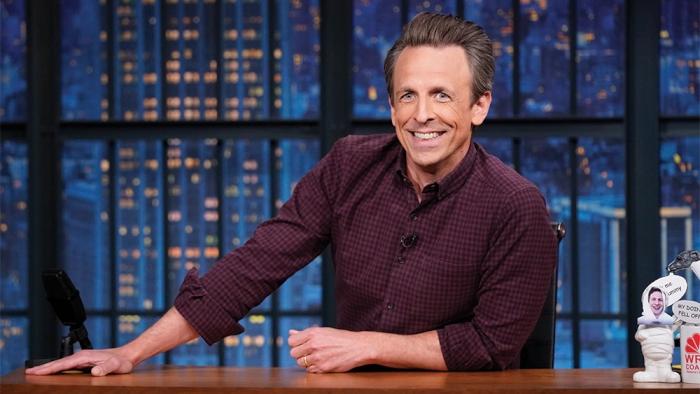 Late-Night TV Is Dying, But Where Will that Leave Seth Meyers?

My oldest kid basically thinks that the Internet really began with YouTube, which — to him — is a sort of old-school medium. But he watches a lot of it, which he consumes differently than me. I watch late-night clips, trailers, or scenes from old movies.

Declan, however, watches a lot of content original to YouTube — a lot of Hank Green and Lindsay Ellis-type stuff. Essays, deconstructions, etc. He got bonkers excited last week because one of his favorite YouTubers, Super Eye Patch Wolf, spent an hour digging through old interviews, pictures, and all of Nathan Fielder’s television shows to figure out if Nathan Fielder is for real, or if he is a character (It’s pretty fascinating).

All of which is to say: If this is what kids are watching these days, that’s amazing. With some limited exceptions, I don’t think that Gen Z is spending a lot of time watching late-night television. To be honest, I don’t blame them.

Late-night ratings across the board are falling; veteran hosts are leaving (Conan, Trevor Noah, James Corden) or being pushed out (Samantha Bee), and it’s not just because linear television is dying. We consume entertainment differently. We don’t want a facile 5-minute pre-rehearsed five-minute interview with a celebrity; we’d rather listen to them speak for an hour on a podcast.

What works on late-night are insightful, deeper dives, as we see with John Oliver’s Last Week Tonight. If you look at Late Night videos on YouTube, which is where Meyers is getting most of his viewership these days, you’ll see that celebrity interviews do 50-100K page views, but Closer Look segments track closer to 1.5 million views. It’s not that attention spans are shorter; it’s that we want more insight.

All of which is to say that late-night talk shows are dying. Colbert, Fallon, and Kimmel may have a few years left, but the rest will have to evolve or die. That, unfortunately, may also include Late Night with Seth Meyers. According to The Times, NBCUniversal is reportedly talking about making changes at Late Night, where revenue is declining. It may just mean cutting staff, but they are also reportedly exploring moving Late Night to Peacock or MSNBC.

I love Late Night (which I only watch on YouTube), but I think the key is not to move it somewhere else or reduce staff but to emphasize what works: “Closer Look” and comedy bits. Reduce it to half an hour. Air it when it tapes and make it available immediately on Peacock and YouTube. No one stays up to 12:05 to watch Seth Meyers interview Fred Armisen, but if we got a Closer Look at 6:30 p.m., it could be the equivalent of the nightly news, but with jokes. I would probably watch that most nights, and I’d stick around for “Jokes Seth Can’t Tell,” and if Seth still wants to interview Fred Armisen? That’s what podcasts are for.

For the record, NBC insists to the Times that all of the options they’re exploring will keep Late Night on NBC. For now.


← Someone Leaked Kanye Footage That Tucker Carlson Didn't Air | 'Interview With The Vampire,' 'She-Hulk,' 'House of the Dragon,' And More On Podjiba! →