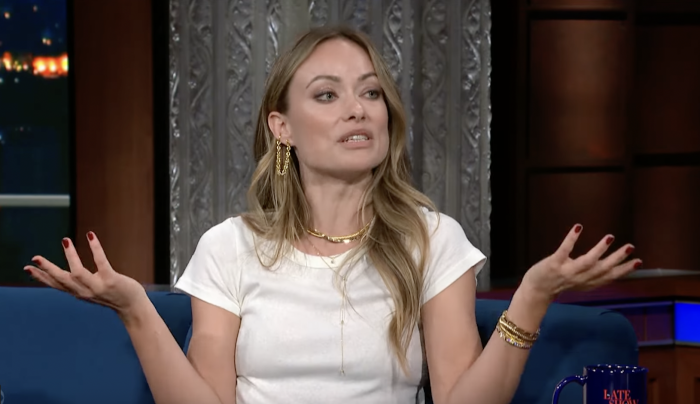 All of which is to say, whatever else you think, at least Olivia Wilde is going out there and answering the questions, whether she wants to or not. Are some of them silly? Absolutely. Harry Styles did not spit on Chris Pine, but wasn’t it fun for a day to think that he did? It’s the Internet. The world is … difficult right now. We crave high drama with low stakes. The Don’t Worry Darling drama is exactly what those of us who consume gossip sometimes need. The Venice Film Festival was basically like crack, and “Miss Flo” played right into it.

To Wilde’s credit, on The Late Show with Stephen Colbert, she answered Colbert’s questions about the drama, while also pointing out — rightfully — that male directors (often tyrannical, often abusive) would not have to answer the same questions (see, e.g., David O. Russell, who screams at his actors, has made life a living hell for some of them, and even conceded that he sexually assaulted his own niece).

And so, what does Wilde have to say about Shia LaBeouf? Basically, the situation was such that LaBeouf could legitimately say he quit, and she could legitimately say she fired him. She tried to “mediate” a dispute between the actors; it failed; and she was essentially given an ultimatum: LaBeouf or Pugh. She chose Pugh. LaBeouf quit.

Meanwhile, she flat-out denies spit-gate. “People can look at a video that shows evidence of someone not spitting on someone else and they’ll still see what they want to see. And that is the creation of drama, and that is clickbait.” Yes, yes it is. And thank you for that, Harry Styles. It probably paid for two reviews from the Toronto Film Festival, including the new film from Florence Pugh. Bless.

As for the “feud” between her and Pugh? Wilde sticks to the script, there: She has nothing but respect for Pugh’s talent, she’s very busy, and that’s great. In other words, yeah: They’re probably not friends. But neither are George Clooney and David O. Russell.

“People would actually be talking about the movie itself,” if it had been directed by a male director, Wilde says, adding that male directors are “praised for being tyrannical. They can be investigated time and time again, it still doesn’t overtake conversations of their actual talent or about the film themselves. This is something we’ve come to expect. It is just very different standards that are created for women and men in the world at large.”

100 percent. Also, Booksmart is phenomenal, and I also have every intention of seeing Don’t Worry Darling, which was true both before and after the drama.

← Watch the Trailer for 'Knock at the Cabin,' M. Night's Latest, Starring Dave Bautista | Here's How 'The Goldbergs' Wrote Jeff Garlin's Character Out of the Show →