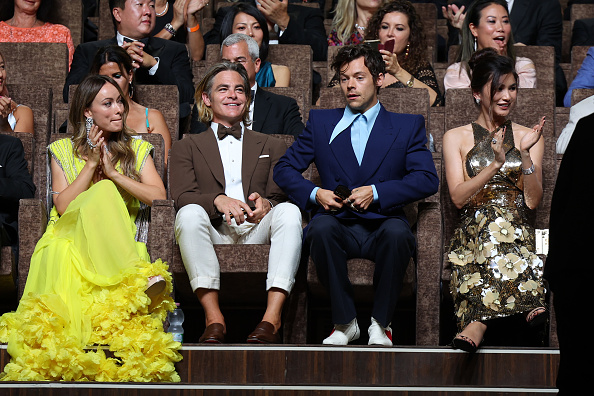 Is there anything better than low-stakes celebrity gossip after a long weekend? The answer is no. No there is not. And the Don’t Worry Darling Venice premiere gave us all the messy nonsense we could ever ask for. Pugh, of course, has begged off of doing publicity, and around the time that Olivia Wilde was telling reporters during a Q&A that scheduling conflicts prevented Florence Pugh from attending the presser, Pugh was high-stepping around in the same city not too far away from the Q&A.

She did make it to the red carpet, however, and she did answer one question, and this answer! The “off camera” feels so … pointed.

The film — despite some mixed (to woefully bad) reviews — did receive a standing ovation, although Pugh did not share in the glow with her director, according to Variety:

Pugh had skipped the press conference for the film earlier in the day. When the audience at Venice erupted into a 4-minute standing ovation for the film, a teary-eyed Pugh — who was sitting several seats away from Wilde — turned away completely from her director, as she instead faced (and danced with) her co-star Nick Kroll.

That is no exaggeration. She didn’t even look to her right during the ovation:

And check out the pointed “Miss Flo” caption on this Insta from Pugh’s stylist (“Miss Flo” is how Wilde condescendingly referred to Pugh in a video to Shia LaBeouf):

But maybe the low-key most interesting moments of the night involved Harry Styles and Chris Pine. To wit, here’s Pine’s blank expression while listening to Styles blather that his “favorite thing about the movie is that it feels like a movie”:

And then there was this: The night’s most bizarre moment. Did Harry Styles spit in Chris Pine’s hand?

#HarryStyles appears to spit on Chris Pine i won't sleep until i know the truth pic.twitter.com/wLXjIHTYgU

WHAT IS GOING ON?

I am going to need a week to myself and the right technology to figure out if Harry Styles spit on Chris Pine. Then I would need another week to cope pic.twitter.com/PTNlA4E1oE

That's the real question isn't it: why? The how and the who is just scenery for the public. Pugh, Styles, Wilde, LaBeouf, keeps 'em guessing like some kind of parlor game, prevents 'em from asking the most important question: why? Why was Chris Pine spit on? Who benefited? Who?? pic.twitter.com/0DGYXgxWxB

Pretended all this Don’t Worry Darling drama was beneath me but now there’s supposed footage of Harry Styles spitting on Chris Pine pic.twitter.com/Y7aIzXxGin

This movie is giving me LIFE.

Years from now, people will ask each other “where were you the night Harry Styles spat on Chris Pine”

I never want this press tour to end pic.twitter.com/lO1h1nb0Q8

Thank you, Florence Pugh, Harry Styles, Olivia Wilde, and Chris Pine: This is exactly how the post-Labor Day season should start.