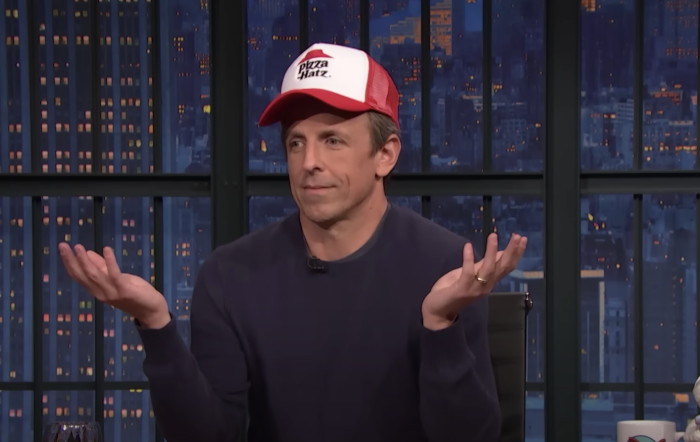 What I Learned Cataloging 'Late Night' with Seth Meyers’ 'Corrections'

I spent the last six months watching, writing (about), graphing, and cataloging Late Night with Seth Meyers and its not-so-mini-series “CORRECTIONS.” The Emmy nominated short-form series began when Meyers returned to the studio — sans audience — as a way to interact with fans; namely, those correcting his show via YouTube comments. A combination of Meyers, his crew, fans, and some amount of pandemic psychosis turned the segment into the best kind of comedy madness, devolving from fixing pronunciation errors to multi-week bits, stories, and gags. My project began as an attempt to overexplain the origin of every joke in “Corrections,” and ended in a 65-page document that was too large to send via Gmail attachment (it now lives safely on my Substack, updated every show-week).

After cataloging what amounts to three years of auto-fictional late-night world-building, I found the Seth Meyers Universe a clear evolution and celebration of the spirit of “old” late-night, rather than the endlessly consumable clickbait other network late night shows increasingly gravitate towards.

Plenty of critics noticed, without an audience, the show evolved into the best form of itself. To viewers’ collective delight, Meyers and his staff treated the at-home crowd to a nightly hour that managed to meet our fear with understanding, compassion, and the kind of built-upon chaos that would never fly in front of a random Midtown audience: recapping this year’s nonexistent must-see murder-mystery show (Tiny Secret Whispers), the development of his musical passion project (Cicada, Cicada), and tales from Meyers’ time at Impression Camp. 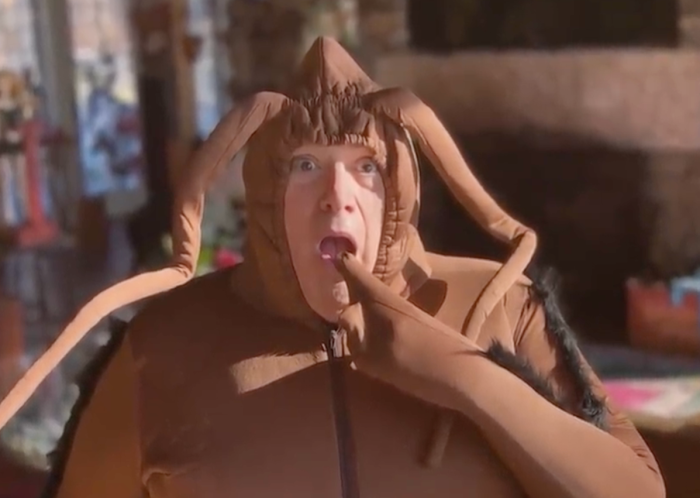 Meyers built out a world of late-night with soap opera style intrigue and drama (not to mention the actual soap opera he seemingly improv-ed into existence). His long-time executive producer was no longer Mike Shoemaker but New York legend “Mikey the Shoe” from the Bronx. Various nautical knick-knacks hijacked the show for a summer. Meyers introduced 50+ distinct impressions in the span of two years. As a long-time viewer, I felt the pandemic didn’t so much force the show to change as it provided the material conditions for LNSM to fully embody the comedic spirit it previously kept on a leash.

I will never know what it felt like viewing Letterman or Conan in the early days of their Late Night runs. However, from what I can tell, the same beautiful irreverence that drove Letterman to drop off gift baskets at GE headquarters and Conan to go to Texas in search of Houstonian viewers, has always been at the heart of LNSM (see Popsicle Schticks) … now it just gets to take center stage.

Meyers ended “Corrections” for the Week of 5/23 with the line “See me next week.” If you are a longtime “Corrections” viewer or a corrector yourself, you know that the phrase is part of an almost ten-month-long bit (est. September 2021). That wasn’t even the most intricate bit of the week: After failing to remove the cardboard from his new “official” Pizza Hatz merch, Meyers pulled out a nine of diamonds from the front of the hat. I did a spit take. Then tried to explain the five or six necessary jokes to understand why pulling a card out of a knock-off Pizza Hut hat made me spew iced coffee. 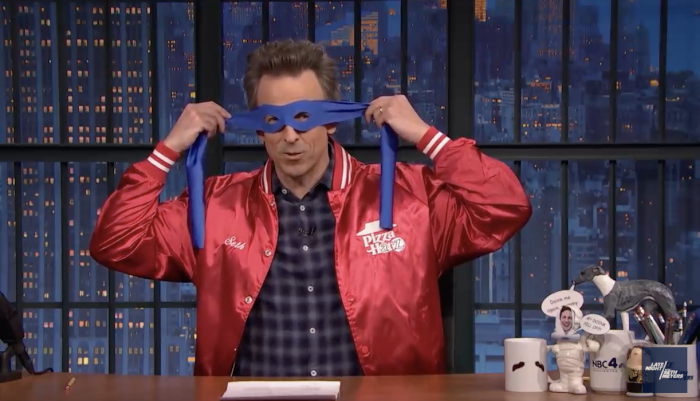 Once, a bit about the painting “Scream” turned into a four-week discussion about the Teenage Mutant Ninja Turtles franchise before devolving into four weeks on The Big Bang Theory. The week after “Corrections” was nominated for an Emmy, Meyers acknowledged voters would have no idea what they were watching, then unapologetically jumped back into a multi-week lesson on avian anatomy (specifically: how roosters blink). There was a six-week run on sloth jokes, three on historic European defenestrations, and five weeks workshopping Meyers’ pitch for an animated World War II-spy feature starring … you guessed it … eleven American spy hens and one American spy rooster.

I’ve determined there is a method to Meyers’ madness: By relaxing the show’s format and introducing “Corrections,” LNSM found a way to harness the rebellious spirit of “old” Late Night. The premise of Letterman’s, then Conan’s, anarchic tendencies were built on a collection of information, jabs, and smaller acts of defiance over time. Viewers wanted in on the action and they succeeded by way of watching every night. This is not to suggest artificial rebellion for the sake of viewers. Rather, their irreverence — that unique element of farce — was the most organic audience fertilizer in the pre-YouTube age. It built a community around the shared legends and vocabulary relied on by each show. As a new viewer, you had to catch on, catch up, or hope that a cool older kid/veteran viewer would clue you in.

YouTube could have (really should have) made joining the ranks of “dedicated Late Night viewer” more accessible. Instead, late-night TV shifted towards producing segments with stand-alone premises that appealed to anyone with internet access. Viewers no longer needed a show’s language or cast of characters to get the joke, just a general grasp of pop culture and a sense of humor. And before ya’ knew it, BOOM: Every press-tour involves going on TV and playing a twisted party game … that the host takes seriously.

As a child of 2010s tumblr culture, I would never suggest gatekeeping late night (making shows inaccessible to the casual viewer for no purpose other than exclusivity). However, from what I gathered cataloging LNSM, audiences crave more than one-liners and press tour interviews. They got it from Letterman and Conan. A growing number seek it from Meyers via TV and YouTube. There is a reason “Corrections” is about to hit its 50th episode and a reason Meyers has stuck to his pre-pandemic clothing and comedy style.

If you can find a laugh—algorithm-guaranteed—anywhere, why tune in for a nightly network TV show? The answer is likely more nuanced than blue button downs, a charming cue card guy, and weekly linguistic history lessons but: I’d bet it has far more to do with the former than apolitical commentary and pranking celebrities du jour.


← Review: Golf Underdog Biopic 'The Phantom of the Open' is a Classic British Comedy, For Better or Worse | 5 Shows After Dark: 'Ms.Marvel' Premiere Disney+, 'The Janes' on HBO →