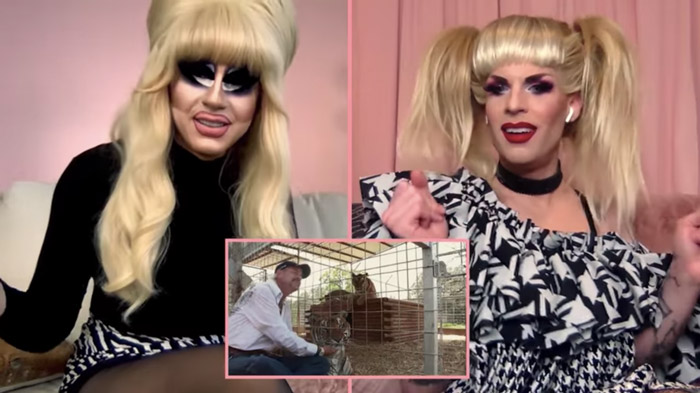 You might have thought the Tiger King craze was over. We talked about the WTF of the Netflix true-crime series. We talked about the troubling bits the filmmakers left out. We reported on the breaking news of its eponymous criminal Joe Exotic, his shady business partner Jeff Lowe, and his nemesis, animal conservationist Carole Baskin. We’ve seen the Honest Trailers. What more could there be to say? Well, we’ll leave that to Netflix binge junkies Trixie Mattel and Katya.

They might be in quarantine, but these queens are still offering new episodes of their webseries, I Like To Watch, on which they react to Netflix series, like The Crown, and Dolly Parton’s Heartstrings. Now, they’re reuniting remotely to take a bite out of Tiger King: Murder, Mayhem and Madness.

The RuPaul Drag Race All-Stars parse through the cringing contradictions, the curious characters, the uncomfortable crushes, dream-casting the movie, and the show’s “gay gay gay” content. Happy Pride month, everyone!

Tiger King is still on Netflix.

← Podjiba Presents: Our 'Friday Night Lights' (But Only Season Two) Recap Begins! | The New Shane Dawson-Tati Westbrook-Jeffree Star YouTube Drama is A Lot So Let's Try To Explain It →