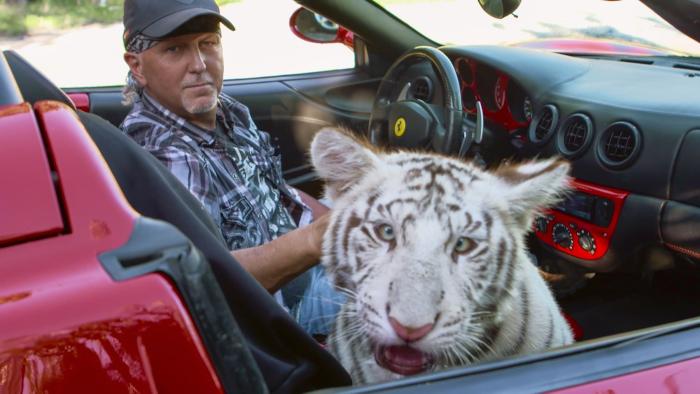 Jeff Lowe is the guy in the Tiger King documentary who swooped in to bail out Joe Exotic and then took over the zoo. He’s the one that some say set up Exotic to use his right-hand man for the murder-for-hire plot against Carole Baskin and then sided with the cops when it all fell apart. He’s a scummy dude who’s still running Greater Wynnewood Exotic Animal Park with animals that belong in the wild instead of behind bars for the entertainment of people itching to touch a tiger, damn the cost.

Lowe decided it was a great idea to do a Reddit AMA to promote Cameo Cares via his very own Cameo account.

It went, ah, poorly. The whole thing turned into a well-deserved roast of Lowe. The twist is that Lowe decided to answer questions via his Cameo link, netting him a payment for every click on his profile. It’s basically a “Can we get back to Rampart” situation but much grosser, with Lowe never passing up an opportunity to say horrible things about other people.

I_Am_Jeff_Lowe - Joe used to invite us over for dinner for pork chops. I would go over when he did grilled cheese and tomato soup. Pepperoni for the pizza never came on meat trucks, so I think I was safe. Joe used to allow the staff members to get big boxes of all the stuff.

I_Am_Jeff_Lowe - You’re a brilliant man and she is not my type. If I was stuck on a deserted island with her, I would f*ck a coconut. I’ve seen the side by side pictures. It looks more like John and Joe’s love child.

I need to know what disgusting things Lowe is alluding to here:
Card

I_Am_Jeff_Lowe - I have never met him and never want to. We’ve talked to ex-employees about him, and have heard disgusting things regarding playtime with the animals.

Lowe is clearly as delusional as everyone else featured in Tiger King:
Card

I_Am_Jeff_Lowe - I’ve never believed anyone should own a tiger without knowledge about tigers. It makes you want to double-check everything. We know we do it right and we are one of the rare few that do.

Your honor, I’d like to remind the jury of the evidence that Lowe used baby tigers in suitcases to lure women to his hotel in Las Vegas… which is him telling the story in the documentary.
Card

I_Am_Jeff_Lowe - I think the weirdest thing we found is that it found was a flash drive of Joe and Finley and they were having sexual relations with animals in the park. That would probably be the weirdest thing about Joe. Thanks for the disturbing question.

Lowe also states that everyone that took part in Tiger King was misled about its intent by the filmmakers:

I_Am_Jeff_Lowe - Netflix did not approach us. We were produced by the guys who made the show. They framed it as an expose on Carole Baskins. And to Carole, they said it was warning against the dangers of keeping tigers. They misrepresented the show to everyone.

Lowe doesn’t care for people getting the impression he was involved with setting up the hit on Baskin, what with their keen ability to hear things he said in the documentary.

As for Lowe’s bust partnership with Tim “Monkey Man” Stark:

I_Am_Jeff_Lowe - He was losing his license to work with the animals. In order to maintain his ability to work with animals, he came down and offered resources to do everything here. When he started to bring the animals down to the new park, he actually was neglectful; and let 27/100 animals roast in a trailed. That’s when it went all bad for us.

I, for one, am very surprised that a person who is clearly a piece of garbage in Tiger King turned out to be a greedy POS in his Reddit AMA. Just super surprised. Wow. Wow.

← 'What Celebritites Have You Encountered That Were Either Really Nice Or Really Horrible?' | 'Weekend Update' Anchor Pays Rent for 160 Tenants in His Grandma's Apartment Complex →