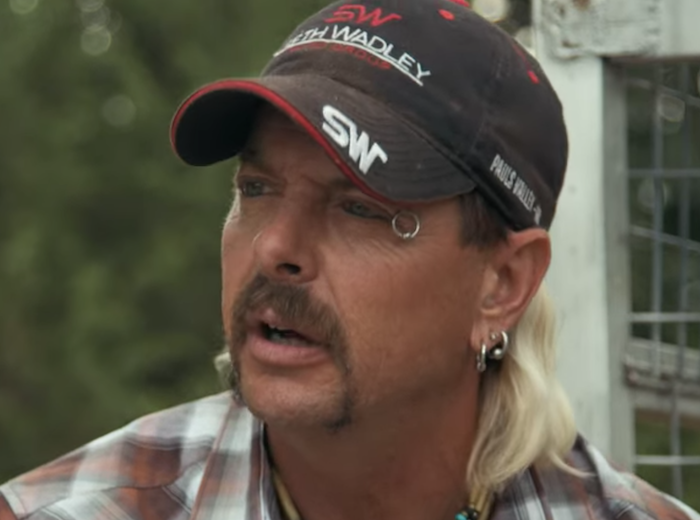 Why Was Joe Exotic’s Racism Cut From 'Tiger King'?

Water is wet and Joe Exotic is racist. Sure, that news probably isn’t shocking to you. Joe Exotic is a piece of garbage, who is definitely guilty, and most definitely killed at least 5 of the tigers he claimed to be protecting. However, you may be wondering what proof we have of Joe’s racism since it wasn’t on display in Tiger King.

Well—wonder no more. Overlord Jodi pointed me to this interview in The Hollywood Reporter with the show’s co-directors, Rebecca Chaiklin and Eric Goode and…well…they have answers, but they’re not great ones.

Some stuff has surfaced about Joe and the “N” word, revealing some of his more racist inclinations. Did any of that come up during the making of Tiger King and did you choose not to include it?

CHAIKLIN: Yes. Joe is a racist, I would say categorically. He said things when we were filming that were very unsettling.

Don’t worry, THR had the same response I did to that answer, mainly, WTF?!

Why did you choose to leave them out?

CHAIKLIN: They didn’t have a context in the story, but he has a lot to learn. I think most of it was ignorance and not having a lot of exposure, and I think he even evolved over the course of the time that we filmed.

GOODE: I would say it’s very important for people to know this, that there seems to be an overwhelming amount of empathy for [Joe’s current husband] Dillon. We had empathy for Joe, but Joe did a lot of horrible things. Joe committed some really serious crimes and Joe was not only cruel and inhumane to his animals, he was cruel to the people around him. I think it’s very important for people to understand that Joe is an actor and he tells people what they want to hear. As much as we have some empathy for Joe and found Joe to be such an incredible character — this mullet-wearing country singer in Oklahoma — he did a lot of horrible things.

Excuse me while I put on what my Overlord colleagues call my “suspenders voice” for a second… ThEy DiDn’T hAvE a CoNtExT iN tHe StOrY.

What the actual f*ck? How is letting someone’s own racist words paint them as a terrible person who also abuses animals and is capable of hiring multiple people to kill one woman not providing context to what a f*cking piece of shit Joe Exotic is?!

What they probably meant was “we needed people to like Joe Exotic, and if we left that racist s*it in, you might have peaced out of the doc immediately and not watched all 7 episodes where we did our best to portray Joe, who again is a piece of s*it, in a sympathetic light.”

F*cking yikes, am I right?

Let’s be really honest, here—the doc did its best to paint Joe as an anti-hero, and Carole Baskin as a she-beast from hell who, on some level, had it coming (look, I enjoyed the salaciousness of this series because as I’ve said repeatedly, I love trash—but at the end of the day, Carole is a victim, has stopped private breeding of big cats, and has devoted her life to ending the f*ckery that is a life of captivity in private zoos and homes that these cats endure.)

The Joe Exotic we got in Tiger King is an entertaining person, and I have no doubt in my mind if he was spouting off racist s*it in his talking heads, even I, a lover of all trashy things, would have turned the doc off if they were trying to portray Joe as anything other than a racist monster. So yeah, I guess his racism didn’t have a context in the story because they wanted us to watch the damn thing, and they needed to sell it in order to make money. It doesn’t make it right, and it doesn’t make it less gross.

← An Update on That Idiot's Easter Sunday Evangelical Woodstock or Whatever | Florence Pugh Does Not Need Your Permission to Date Zach Braff, Thanks →