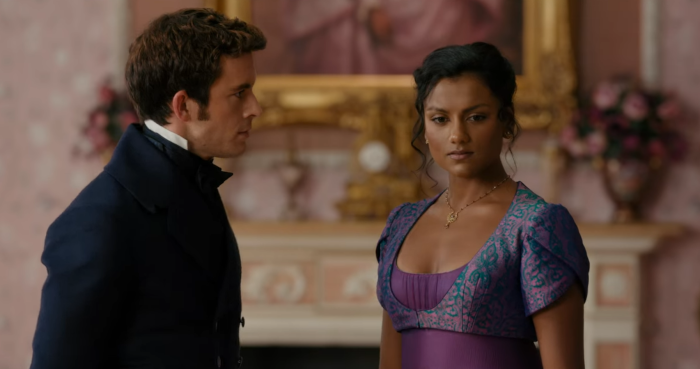 The first season of Bridgerton was, to put it mildly, a sensation. It was a triumph for the Shondaland production company embarking on its new lucrative Netflix deal with Shonda Rhimes acting as executive producer (with Chris Van Dusen as creator), and primed star Regé-Jean Page’s career to be launched into the stratosphere. With multiple projects on the way, including the Russo Brothers-helmed spy film, The Grey Man slated to be released in July of this year, the Dungeons & Dragons film, as well as being the leading contender to become the next James Bond, Page gracefully stepped away from Bridgerton even after it became a mammoth hit for the streaming platform. His departure wasn’t expected to afflict any lasting harm on the series, as subsequent seasons were already intended (having been adapted from the book series of the same name by author Julia Quinn) to focus on separate sets of characters per entry. Despite the fact his Duke Simon was not integral to future storylines, it did leave some to wonder, myself included, if his absence would be felt. After watching the latest season, released in its entirety on March 25th, I can say beyond the shadow of a doubt that the answer is an unequivocal “yes.”

Stepping into the role of the amorous male protagonist in season two is Anthony Bridgerton (Jonathan Bailey), the rakish brother introduced in the first season, who now finds himself in the midst of a love triangle. Complicating matters is the fact that the triangle also involves a pair of sisters, the young and charming Edwina (Charithra Chandran) who is newly set out on the marriage market, and protective older sister Kate (Simone Ashley) as the independently-minded “spinster” who makes no secret of her loathing for Anthony. But is the shared feelings between Anthony and Kate truly hatred, or something more? That’s right, romantic trope fans, we get an Enemies To Lovers in addition to a Love Triangle. It’s a two-for-one!

With Anthony’s title of Viscount and his status as eldest son, he’s in want of a wife, and for a choosy man of his station, only Edwina will do. It’s a balancing act to have a man doggedly pursue a woman while slowly becoming infatuated with another without him coming off as a cad, an act that fails here. Anthony is a harsh cynic who makes a big to-do over eschewing the notion of love—while insisting on a near-impossible perfection for his potential bride, mind you—and Edwina is such a lovely young woman (Chandran is too charming by half), it’s easy to despise him. I actively rooted for Kate, the only person able to see through his manipulative attempt at courtship, to shoo him away from her, and groaned each time a scheme of his proved successful. Rakishness can be an enticing quality, but when unaccompanied with a general likeability, it’s a turn-off. An attempt to humanize him by injecting family trauma into his background offers a small insight into his perspective but does little to offset his unpleasantness.

Bailey isn’t entirely to blame here; the writing was never the show’s strong suit in the first place. Once deprived of Regé-Jean Page’s intoxicating charisma and smolder, the plodding insistence to explain even the most easily accessible motivations is far more obvious here. But the weighty declarations of love found in the romance genre, especially those typically found in period settings, need to not only be spoken with conviction, but with a certain gravitas that eludes Bailey. He delivers lines like, “It is maddening how much you consume my very being,” with a wide-eyed tremulousness that fails at providing the sweeping sense of romance that put the series on the map.

Some would argue that romance isn’t what distinguished Bridgerton from other shows in the genre as much as it was the titillating number of graphic sex scenes. This latest season takes a far tamer route in that sex is almost entirely absent. It isn’t a sticking point, per se, but the complete lack of heat over the season proves to be a disappointment. Where’s the heaving bosoms, the slow, sensual licking of silverware? There’s nary a single sleeve rolled up. Where’s the thirst?! The show’s unapologetic horniness was easily its greatest strength, and its absence is keenly felt. The sole saving grace is Simone Ashley, who must have been exhausted trying to carry this entire production on her shoulders. I hope her efforts to summon up heat from those tiny sparks are recognized by casting agents.

If the only problem here was the uninspired central romance, the season could be salvaged. Unfortunately, for all of the half dozen subplots, not a single one is worth a damn. Not the con-man drama with the Featheringtons, the Queen’s obsession with discovering the identity of Lady Whistledown, or Benedict’s (Luke Thompson) silly art school plot, useless fluff that is such obvious filler, you can use it to stuff a pillow. Though the most maddening storyline is easily Eloise (Claudia Jessie) who, in the previous season, was simply a young lady with a bit of a rebellious streak. Now she displays such shocking levels of self-absorption that I was filled with dread each time she spoke in a scene. It’s the sort of scenario in which I agree with the message (i.e. class struggle and feminist ideals) but the person delivering it is so intolerable that the subject matter is lost entirely. There’s material to be mined in attempting to cope with constant comparisons to a seemingly perfect older sister or turning away from high society, but none of it ever rises above Eloise’s bratty self-righteousness. I felt nothing but resentment for this character, especially while watching her be such a godawful friend to Penelope (Nicola Coughlan).

This leads me to the most unattractive feature woven throughout the entire season: the decision to make Penelope, the sweet but shy young woman, a human punching bag. The formerly plucky character now spends every episode being mistreated by family, chasing down Eloise—who, in all of their many one-on-ones, never once asks how Penelope is doing—or pining after Colin (Luke Newton), who’s quick to point out all of Penelope’s great qualities, but even quicker to assure friends that he would never be interested in her romantically. The fact that both of these individuals laud Penelope as “loyal” isn’t lost on me, yet it’s a red flag that wavers uselessly in the wind. For a show that is so praised for its diversity, it’s distasteful (not to mention gives shades of fatphobia) to see the only large character be handled so horribly. It may all be set up for some sort of villain origin story, but if so, the production forgot to include it into the show. Even her single small attempt to stand up for herself is essentially erased in the wake of the other person’s vicious parting words. Coughlan deserves so much better than this, and her return for future seasons should rely on the sole condition that Penelope gets to burn the town to the ground.

Even at its best, Bridgerton was never high-minded in what it had to offer, but at least it was a harmlessly salacious good time. Now that’s gone, the period drama is little more than a glass of champagne carelessly left out all night. The faint taste may still be detected on the tongue, but the drink has gone utterly flat. Only a few moments of delight remain, mostly in scenes involving Lady Bridgerton (Ruth Gemmell) and Lady Danbury (Adjoa Andoh), whose alliance evolves into an adorable friendship that I would gladly watch for hours. But without any of the appeal that made last season so diverting, it leaves me with a yearning of the worst kind.

The full second season of Bridgerton is available on Netflix.

Kaleena Rivera is the TV Editor at Pajiba. When she isn’t sighing at Eloise’s thousandth mention of Lady Whistledown, she can be found on Twitter here.