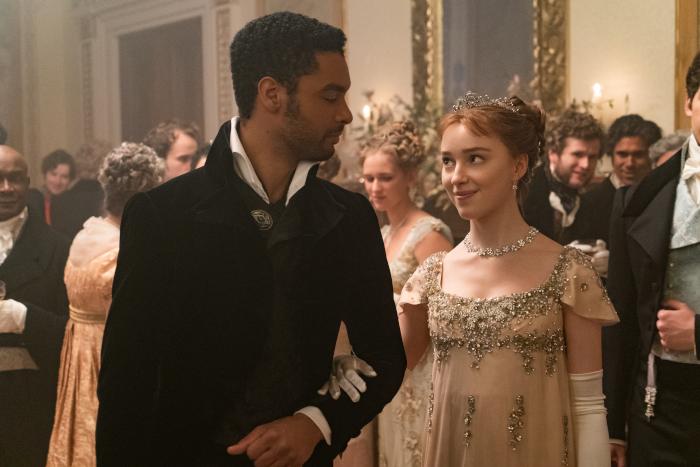 Bridgerton has ridden in on a horse to save us from the lack of period romances recently. Or to update and upend the genre altogether. It’s unclear. Set in a fantastical version of the Regency period, Bridgerton clearly takes inspiration from Jane Austen’s novels. It aims to be progressive in its approach to feminism, race, and love. It accomplishes absolutely none of that and yet it’s still entertaining, filled to the brim with frolicking socialites, scandals, and a central love story that is spectacularly angsty and passionate in equal measure.

Based on the novels by Julia Quinn, Bridgerton follows the titular family — who are wealthy, renowned, and of the highest societal status — as they navigate the London season of what can only be described as matchmaking. Daphne (Phoebe Dynevor), the eldest Bridgerton daughter, is presented to Queen Charlotte (a memorable Golda Rosheuvel) for approval, which thereafter provides her with a number of excellent gentlemen callers. Daphne’s aim is to marry well to maintain the status of her family and she’s doing a good job until she bumps right into Simon (Regé-Jean Page), the Duke of Hastings, the best friend of her brother Anthony (Jonathan Bailey), who is in love with an opera singer (Sabrina Bartlett) and is keeping it on the down low.

Daphne and Simon get off on the wrong foot and want nothing to do with each other at first. However, following an article by Lady Whistledown (voiced by Julie Andrews), the mystery columnist who is attuned to every piece of gossip and scandal in London society, suggests that she is no longer the “it” girl for the season, it sends the quality of Daphne’s suitors down the drain. Simon steps in to propose a deal: he will pretend to court her so as to attract more suitable options (because everyone wants what they think the duke has) and he will continue to uphold the vow he made to the father he hates, which involves never getting married or having children.

Bridgerton starts off a bit shaky before finding a steady pace and the confusion in the beginning is more about there being way too many characters to keep track of. Once who’s who is sorted, the torrid scandals, gossip, and debauchery really take off. Let’s start with Daphne and Simon, the main pairing and the one who also attracts the most drama. Simon is all swagger. He walks into each room like he owns the damn place and that is, admittedly, one of his most attractive qualities. Call him a head-turner, confident, or dashing, but whatever it is he’s got it. Daphne is the proper lady whose thoughts become understandably improper when she begins her fake relationship with Simon. Their initial hatred of each other is contrived, but their chemistry and growing feelings for each other is better showcased a couple of episodes into the first season. Their love story is the main attraction and the angst in episode two to episode five is addictive and compelling. Seriously, I could not stop watching. The series excels in romantic pining, two characters who are just in reach of each other, but they can only steal quick, passionate glances from across the room when the other isn’t looking. Theirs is a relationship comprised of a man who has sworn no love, but is somehow changed by Daphne, who is in search of a loving marriage, but has never known lust. It’s an interesting match that is too often overshadowed by their lack of communication and choices. 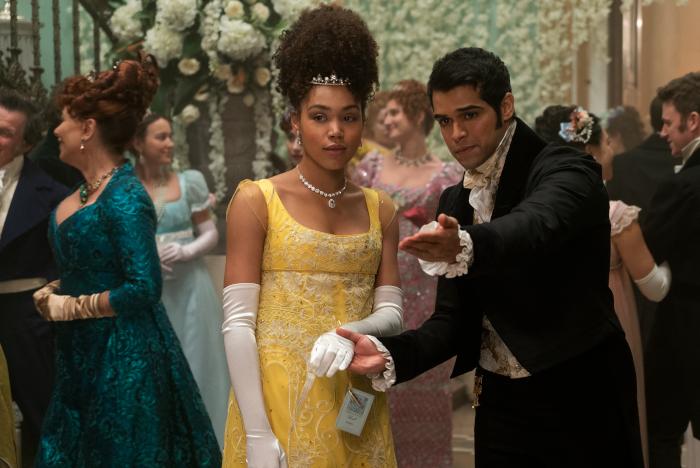 However, Bridgerton is very consumed with presenting us with a period romance that it leaves most relationships and themes rather hollow. The anachronisms are amusing, however, especially when the orchestra plays violin arrangements of modern songs, including one by Taylor Swift. There is a lot of drama for the sake of drama and it occasionally feels rushed and over-the-top because that is all it’s focused on. As an entertaining (albeit shallow) series, it’s exciting to watch, if only to see the romance unfold and to find out what happens. But, Bridgerton exists in a bubble, a fantasy that doesn’t take into account anything beyond the dreamy aspects. There is no analysis of socialites, race is mentioned once in a “love conquers all” explanation, and there are sprinkles of female friendship, but none of them are a point of particular focus. Bridgerton even tries to emulate Elizabeth and Jane’s differences from Pride and Prejudice with Daphne and her sister Eloise (Claudia Jessie), who wants to go to university and constantly frowns upon marriage, but it feels rather empty without the same closeness.

The characters are very aware that they could do so much more if they were men, but the series fails in exploring that they shouldn’t have to be to get what they want. Bridgerton wants points for being diverse, but it’s hard to ignore the fact that one of the only Black woman characters, Marina (Ruby Barker), is shamed for her own scandal, lied to, and is later betrayed. Marina is the distant relative of the Featheringtons, a white family who is often dismissed in society for not being as rich or high in family name as others like Bridgerton. Absolutely no one is on Marina’s side and she’s forced to fend for and defend herself a lot. She would be the Cinderella of the story, stuck with an evil stepmother-type and everything, only she doesn’t really get the prince in the end.

What’s worse is that her predicament is used not to advance her own storyline, but as a plot device for the Featheringtons and their own insecurities amidst their fellow aristocrats. How dare Marina be a beautiful Black woman, swooping in to grab the attention of Colin Bridgerton and so many other suitors? How dare she do so while also not being all that rich? All that said, the narrative leans heavily in the favor of Penelope Featherington (Nicola Coughlan). The typically kind young woman bares her claws as soon as Colin, the man she is crushing on, turns his attention to Marina. Suddenly, Marina is enemy number one because she wants to marry quickly to save herself from the ridicule she knows will follow her. She isn’t allowed to do that while the white women are afforded perspective and liberty to bend the rules and outright lie without reproach. However, while Bridgerton still functions within the framework of a period piece, where women are in competition with each other over the affections of rich and powerful men, the fact that it aims to be progressive at all proves to be a failure when it comes to which characters such privileges are afforded to.

The series has general issues with secrets, the control and power they offer, the lack of communication they breed, and the issues surrounding consent in all its forms. (At one point, there is even an assault that goes largely ignored by the story.) It gets to be frustrating, but we’re supposed to be in awe of the costumes and the fantasy (both of which are very alluring). All this to say that it’s an easy series to binge, but it could have been a lot less shallow.

Bridgerton is available to stream December 25 on Netflix.