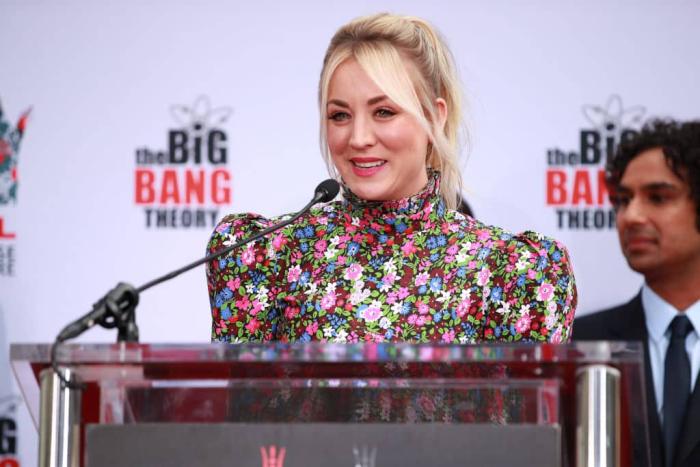 The Minor Renaissance of Kaley Cuoco

The Flight Attendant, an HBO Max-exclusive series based on the novel of the same name, was just renewed for a second season. That’s great news for star and executive producer Kaley Cuoco, who received some of the strongest reviews of her career for her work in the lead role. Cuoco has experienced something of a mini-renaissance this past year, between the unexpected critical success of The Flight Attendant and her work on the animated series Harley Quinn, which she also executive produces. Her production company, Yes, Norman Productions, has a first-look deal with Warner Bros., and she has plenty of solid-looking work on the horizon. Cuoco isn’t nearing McConaissance levels of grandly hyped career revivals, mostly because she never really went away and has never reached the heights of celebrity that old-school movie stars are used to. Still, it’s been interesting to watch someone who most of us have at least a passing familiarity with get a moment to shine brighter than anyone had anticipated.

Cuoco has been in the public eye since she was ten years old. She worked mostly in sitcoms and made-for-TV movies and had a variety of shows under her belt before she turned 20. You probably recognized her from the comedy 8 Simple Rules or her turn in the eighth season of Charmed. Cuoco is the epitome of a TV actress, a moniker that didn’t quite carry the critical heft that it does in the current age of Peak TV overload. She was a jobbing actress, the kind of cute cameo you’d remember from that one Disney Channel movie or an episode of that show you had on in the background while doing the ironing. The entertainment business is dependent on this kind of actor, far more so than the A-List megastars. The difference with Cuoco is that one of her gigs became the most-watched show on television.

Nobody could ever accuse The Big Bang Theory of being a ground-breaking or particularly daring show. It’s practically the Rosetta Stone of the network sitcom formula, as polished to eerily effective perfection by showrunner Chuck Lorre. During its 12-season run, the show was held up by many critics as the exemplification of staid small-screen comedy that appealed to the lowest common denominator for optimal results. For many years, Cuoco was the only major female character on this show, one plagued with leering misogyny, occasional racism, and an overall regressive attitude towards women. Cuoco’s character, the aspiring actress Penny, was derided for her supposed stupidity and her job as a waitress, all while endlessly leered at by her so-called friends. For all too long, the joke always seemed to be on Penny, the ‘dumb blonde.’

All of this made it hard to really appreciate Cuoco’s work on the series. It’s the kind of solid, appealing and well-measured performance that critics seldom give the time of day anyway, but couple that with the show’s status as a punching bag and the sheer lack of respect given to Penny and Cuoco was primed to be underestimated. In reality, a lot of The Big Bang Theory simply wouldn’t work without Cuoco’s mostly straight woman act and familiar warmth to balance out the overtly mannered tics of Jim Parsons and the sleaziness of Simon Helberg. It’s hard to lament poor Kaley’s plight given that being on this terrible show made her one of the highest-paid women on television and the residuals alone will ensure she lives comfortably for many decades. Rather, the issue is more a systemic one in terms of mainstream Hollywood creativity. How the hell is the ‘token chick’ trope still a thing and how does it render even the highest-paid women in the business an also-ran on her own show?

Following the end of The Big Bang Theory, it never seemed as though the central cast were going to be catapulted into the movie world in the manner of Jennifer Aniston, post-Friends. Jim Parsons seems more focused on stage work, Johnny Galecki returned to The Conners sans Roseanne, and Mayim Bialik is remaking Miranda for American TV on top of writing weird shaming think-pieces. These were never the kind of actors who would go on to headline blockbusters or follow the current route of A-List actor celebrity. The task of someone like Cuoco was to find an appropriate niche in an increasingly crowded market that didn’t rely on repeating the stuff that had catapulted her into stardom. Cuoco knows her range. She knows what she’s good at, and now, with her own production company funneling the material directly to her, she has the ability to make the right choices.

Both Harley Quinn and The Flight Attendant are perfect fits for what Cuoco does best and what has often been overlooked about her. As the animated version of Gotham’s most beloved mad psychiatrist, Cuoco gets to be giddily profane yet oddly earnest as Harley, a driven weirdo whose ambitions are often hindered by a rather prominent sh*tty ex. It’s not a typical Harley Quinn performance (she’s not hamming it up with a Brooklyn accent or trying to replicate those that came before her) but it’s a fully inhabited one. It’s the right mixture of Irene Dunne-style classic screwball, Venture Bros-inspired irreverence, and pure spark. It’s not a shtick performance, nor is the show the obvious cash-in many expected it to be. For Cuoco, it’s a solid next step in her career: all the fun of being part of the overwhelming superhero craze of the 2000s with more creative power over the material and way less mandatory gym workouts.

The Flight Attendant sees Cuoco occupying familiar modern pop culture territory: the hot mess. The show is a lot frothier than, say, HBO’s Big Little Lies or TBS’s Search Party, but still a fun black comedy that gives Cuoco some much-needed room to breathe. Linda Holmes of NPR described Cuoco’s commendable talent in how she, and the show, successfully ‘walks the knife-edge of making a central character both a rootable protagonist and kind of a garbage person some of the time.’ It’s a great kind of role for an actress hoping to break out of their limiting mold. The tonal mix of noir-thriller and screwball also presented her with some fascinating challenges as an actress, far beyond whatever Chuck Lorre would give her.

Browse Twitter and you’ll see a lot of responses from people who are surprised by how good Cuoco is in her new TV projects. They had no idea of her range or any interest in her work until this year. Even die-hard Big Bang Theory haters are coming round to her. That’s not necessarily a surprise. When you’re that famous for doing one thing that is, to put it mildly, critically divisive, people are bound to react unexpectedly when you challenge their preconceived image of you. It’s always exciting to see such perceptions shift in an industry wedded to narrowly defined types and trends. Mostly, Cuoco’s success is a sign of a highly specific ecosystem in television. She is and always has been a TV actress but that means something wildly different now than it did when she started, or even when The Big Bang Theory premiered. Even the most adored Oscar-winning actors of our generation are flocking to TV now, something that would have been unthinkable two decades ago. She had the long-running sitcom to pay her bills and now she’s using that success to leverage the kind of work that wouldn’t typically be offered to her. It’s hardcore privilege in action, and I’m sure we’ll get the usual ‘she’s rich, who cares’ comments, but dissecting this sort of work in the context of entertainment and misogyny has its merits. For me, it’s just so dang refreshing to see Cuoco thrive without having to be gawked at by ‘adorkable’ creeps.